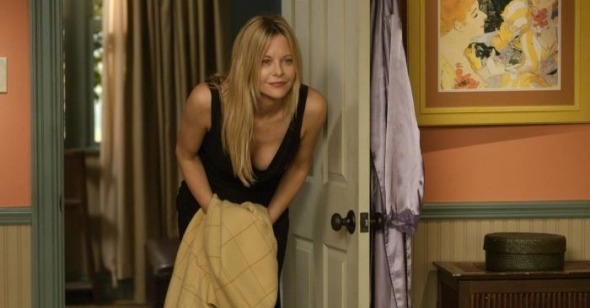 The enormous groundswell of sympathy and support surrounding the release of Adrienne Shelly‚Äôs Waitress blinded most viewers to its clear deficiencies. It might be unfair to conjecture what the critical reception for the good-natured if contrived and shabbily visualized romantic comedy might have been if actress-turned-director Shelly hadn‚Äôt been horrifically murdered before its release, but it‚Äôs safe to assume the processed-cheesy Keri Russell vehicle wouldn‚Äôt have been the subject of quite as many think pieces. Interest in Shelly‚Äôs auteurist potential will inevitably end with the release of Serious Moonlight, based on a script of Shelly‚Äôs which her friend and Waitress costar Cheryl Hines has selected as her directorial debut. Again, some good will might temper responses, but the film clearly fails to cohere on any level.

Even before the preposterous plot kicks into conceptual high gear, Serious Moonlight reveals its quite central problem. Here is Meg Ryan, once more as an overgrown child-woman, cooing and pawing around as though a fresh ingenue; even ten years ago, at the time of You‚Äôve Got Mail, this shtick seemed desperate, yet now that Ryan is in her late forties and has reconstituted the lower half of her face into a masklike caricature of its former self, her cutesy mannerisms seem severely pathological, or worse for an actor, disingenuous. In ‚ÄúMoonlight,‚Äù she plays successful lawyer Louise, introduced donning sunglasses and hurriedly squeegeeing her car windshield while gabbing into a cell phone; girlish and frazzled, yet in control, she‚Äôs the typical Ryan character. Soon enough, Louise arrives home and is so jarred to find her husband, Ian (Timothy Hutton), leaving to escape to Paris with a younger woman that she smashes a flowerpot over his head and duct tapes his unconscious body to a chair. When he comes to, he discovers a militant Louise holding him captive until he agrees to reconcile; Ian insists that he doesn‚Äôt love her anymore, to which she angrily responds, ‚ÄúThen you‚Äôll stay here until you do.‚Äù

Even in a goofy comic scenario like this one, a manic, unbalanced character such as Louise calls for true pathos and tangible neuroses, yet Ryan doesn‚Äôt invest her with any gravitas. She‚Äôs prefabricated, as is the movie around her, which has the enervating, even lighting of a sitcom and is seemingly decorated right out of a Crate and Barrel catalog. There seems to be an almost intentional lack of texture and genuine feeling to the film, as though calling attention to itself as a frivolous lark will save it from harsh criticism. This makes it especially difficult to believe when the film takes its abrupt and winding second- and third-act detours, which include the introduction of Kristen Bell as the younger lover and a robber played by Justin Long, as it moves into thriller territory and to sober reconciliation drama and then back to slapstick comedy.

Right up to the head-slapping ending, it remains a mystery why we should invest any serious consideration in the possible marriage reunion between a woman who screams ‚ÄúI refuse to be lonely!‚Äù and tries to force-feed her tied-and-occasionally-gagged husband fresh-baked cookies and a man who chastises his wife for being ‚Äúugly‚Äù before leaving her for a grad student 20 years younger. Shelly might have intended a Virginia Woolf‚Äìlite two-hander, yet with her tinny dialogue, Ryan, Hutton, and Bell‚Äôs shrill performances, and Hines‚Äôs consistently unimaginative, even clumsy, set-ups, ‚ÄúSerious Moonlight‚Äù comes across like little more than a very special bondage episode of Mad About You.