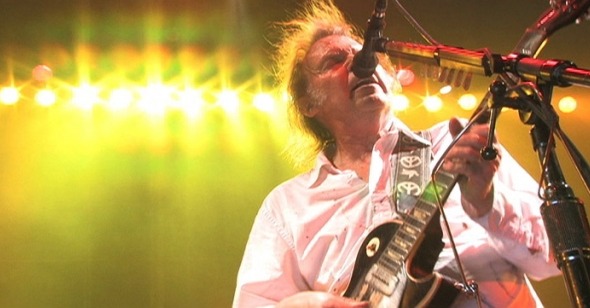 Long May You Run
By Andrew Chan

Though few aesthetic experiences are as necessarily social and participatory as concert-going, when live music is captured in that other communal art form known as cinema it is difficult for it to feel anything but awkwardly isolating. Sitting in the darkness of the theater, watching others experiencing the performance at some previous time, the concert-film viewer is always stuck on the outside, unsure whether to clap, stomp, or sing along or just watch reverently. A successful product of the genre, like 2006’s Dave Chappelle’s Block Party, can reduce our awareness of this chasm between ourselves and the onscreen stage, inviting us to bask in the good vibes. Or, like Jonathan Demme’s Neil Young: Heart of Gold (also released in 2006) and its new follow-up Neil Young Trunk Show, it can ignore the live audience altogether and emphasize its own meticulously designed theatricality.

What Heart of Gold lacked in spontaneity, it made up for in an atmosphere both haunted and laidback. Demme focused our attention on the naturalness with which Young’s band of weathered roots-rock veterans inhabits the coziness of Nashville’s Ryman Auditorium. By minimizing engagement with the fans, and ending with the singer strumming his guitar to an empty theater, the filmed concert seems like it’s played by and for ghosts. If you don’t find yourself in love with the music itself (three-quarters of which come from Young’s mildly received 2005 album Prairie Wind), you can still get lost in the camera’s effortlessly poetic rendering of the event, built on the alternation of wide proscenium shots and spare movements across the stage. Intimate views of the performance contrast with the artificiality of the set design and Demme’s methodical compositions, creating a sense of the band members being so close yet so far, familiar yet mythical. As in Scorsese’s The Last Waltz, our eye glides fluidly through the thicket of musicians and instruments, at times merely observing and at others becoming a part of their rhythm. And as in Demme’s own Stop Making Sense, we experience the show both as a spectacle and as a warm gathering of radiantly human talent.

Filmed after Young had suffered the death of his father and undergone surgery for an aneurysm, Heart of Gold is one of the most beautiful instances I know in cinema of the length of a single stage performance replicating the weight and suspense of a life’s duration, and a curtain call symbolizing an inevitable end. Neil Young Trunk Show, which is the second entry in Demme’s proposed trilogy on the Godfather of Grunge, starts off with the same helplessly melancholic folk and country-rock that dominated Heart of Gold, taken from the artist’s most commercially successful albums in the early Seventies. These are the pretty melodies that first piqued the interest of most of Young’s casual fans, including myself, and it’s during these quieter performances that Demme favors uncomfortably tight close-ups with almost no cuts. Within the span of three or four minutes, we get nothing but riveting portraiture, complete with wincing eyes and hanging jowls. On this shallow end of the set list, we hang on every note and gesture, because we know how brief the songs are and how quickly these moments will pass. More than Heart of Gold, Trunk Show allows us an intense focus on an aging man throwing his entire body into the music, at times seemingly surprised by the passion and sheer sadness of the sound he’s making.

There are, indeed, few sounds in popular music more heartbreaking than a Neil Young vocal. Sometimes a sharp and atonal bleat, sometimes hanging nervously in the back of his mouth, Young’s voice is so instantly memorable it needs no words and no narrative to flesh it out. Demme trusts in this and is clearly, appropriately, in awe of it, but he also isn’t interested in presenting us the same permanently plaintive Young. In an interview, he has even advised: “If you’re not a Neil Young fan, don’t waste your time . . . if you don’t love electric guitar, don’t go.” Accentuating the murkiness and loudness of the rocker’s new material is a stage lit by dim, sickly yellow and purple spotlights, substituting for the comfort of Heart of Gold’s ochre and umber. Gone are the backdrops depicting hearth and home; here, a few grotesque props remind us of the set design for the grungy Young-directed concert film Rust Never Sleeps. As if standing in defiance of those who accused Heart of Gold of pimping Young as some Starbucks-friendly folkster (or those who remain suspicious of an artist who briefly cultivated a soft-rock following in the Seventies), Trunk Show eventually announces its mission to blow your eardrums out.

The meat of the film is not the bravely shy singer but the merciless guitarist, and “No Hidden Path,” a monstrous 20-minute jam that brings the first half to its climax, serves as a kind of litmus test. Taken from his latest studio album, Chrome Dreams II, the song starts out with images of moon and mist that would have fit in the lyrics of “Harvest Moon,” before launching into the type of vague spiritual pronouncements that have recently muddied Young’s once-vivid songwriting. Once the guitar takes over, though, there’s no turning back. A cacophony of escalating moans, yelps, and screeches, the performance is likely to try the patience of all but the truest devotees. But by the end, the uninitiated may feel they’ve undergone something like a religious conversion—especially when Young lets our bleeding ears rest once again on some of those impossibly delicate ballads. Even the most brutal of art-house provocateurs would have a hard time cinematically sustaining such an outburst of anguish and foreboding, while steering us so swiftly back to safety and solace. What emerges is the most coherent and generous portrait of this artist yet captured on film, and probably the most remarkable melding of his soft and hard sides since the 1979 album Rust Never Sleeps. When he’s stalking across the stage in a rocked-out stupor, wisps of hair dangling in his face, it’s the force of his commitment that moves you. Where Heart of Gold showed us a man ready to make peace with the dying of the light, Trunk Show gives us all the rage Young has left in him.