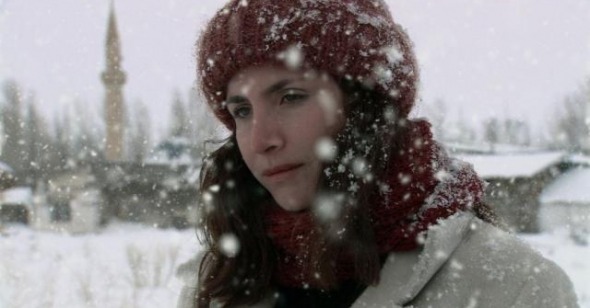 The last time we heard from Turkey's auteur-in-residence, Nuri Bilge Ceylan, was a few years ago when his Distant, replete with festival laurels, drifted through theaters, quietly heralded. When it screened at Cannes in 2003, Ceylan's gray, taciturn film had been among those works sweepingly decried by Roger Ebert‚ÄĒin the company of Angelopoulos, Kiarostami, and Vincent Gallo‚ÄĒas ‚Äúfashionably dead films in which shots last forever, and grim middle-aged men with moustaches sit and look and think and smoke and think and look and sit and smoke and shout and drive around and smoke.‚ÄĚ On watching Ceylan's film, I was inclined to agree with Ebert; I was preoccupied by everything familiar about Distant: the close-lipped existential ennui, the static brooding. The film's Cannes success suggested that the key to emerging on the international cinema map was to produce work that stayed within the established Serious Art House template, as if in tandem with Turkey's application for EU membership, they'd been obliged to RSVP to Ms. Kael's old ‚Äúcome-dressed-as-the-sick-soul-of-Europe‚ÄĚ party.

Simply put, I fucked up, and so did Ebert (he admitted as much, in a later three-star review of Distant). Paying too much mind to whatever seemed hackneyed in the film's self-serious, stripped-down style and logy pacing, I‚Äôd undervalued how keenly its slim country mouse-city mouse storyline articulated a certain breed of urban lonesomeness. Maybe I was too close to Distant's subject at the time, but, though I haven't rewatched it since, I still think often of that film's biting cold; my trudge through the movie has stayed with me, and that counts for something.

Ceylan's follow-up, Climates, is a no less forbidding piece. In the film's first spoken line, a slack-faced middle-aged man (Ceylan himself) poking through some ancient ruins with his digital camera, worries that he's boring his young girlfriend (Ebru Ceylan‚ÄĒthe director's wife); it has to be a joke, because neither Ceylan or his alter-ego give a damn about working to keep anybody‚Äôs interest up. Long, wordless swaths interject in the film a numbing triptych of heartache‚ÄĒthe couple break up on an Aegean coast vacation, he drifts back to an old affair and his professorship in Istanbul, then tracks his ex down on-location with a production in the wintry East.

This isn't a movie that engages viewers so much as dissolves over them‚ÄĒyou can check out, let your mind digress onto errands or dirty-minded reveries, and come back knowing you haven't exactly missed anything. I think there are times when this movie might even penetrate deeper when coming in from the periphery. Which isn‚Äôt to say that Ceylan simply spools out doleful wallpaper for pretentious festival-goers; returning to the Class of Cannes 2003, Climates has parallels with Gallo's obsessively one-man-band Brown Bunny, though thankfully not sharing that film's after-school-special finale‚ÄĒthere are shots, though, where I would swear that Ceylan, like Gallo, is both actor and camera operator. The director cut his teeth as a still photographer, and his HD Cam-shot Climates feels appealingly, obsessively handmade; passages in our protagonist's dim hotel room seem as diaristic as Stephen Shore‚Äôs seventies road-trip photos.

Like Brown Bunny, Climates, a gray wispy thing, hangs like a shroud around one sharp centerpiece scene of carnality, a tryst between Ceylan's character and a girlfriend (impish Nazan Kesal, in a tart, crass performance) that ambiguously tows the line between rape and rough sex. The film's sum total is a shrewd portrait of emotionally desiccant, unconsciously insincere masculinity (a comparison to Pialat's protagonists is apt); the final shot, a fade-out disappearance, plays as a condensation of the famous coda of Antonioni's L'Eclisse, some sort of statement on the continuing life of places after the disappearance of people, which neatly connects to the film's emphasis on archaeology.

All of which, like the movie's emotional/geographic motion from hot-to-cold, is a little too patly symbolic for my tastes‚ÄĒCeylan is not Pialat, not Antonioni, and certainly no ‚Äúmaster.‚ÄĚ But he is a diligent artist who squints and picks and digs and waits for tonal specificities in scenes (aided by hyper-crisp foley sound), he has a fine eye for dolorous landscapes, and he has more of a sense of humor than you might expect, as in a scene where our couple try to reconcile in the back of a film equipment van, punctuated by the interruptions of PAs, painful in its precise timing. And if you‚Äôre willing to drift out and get a little lost, you may find his very sad, slack movie inhabiting you for some time to come.