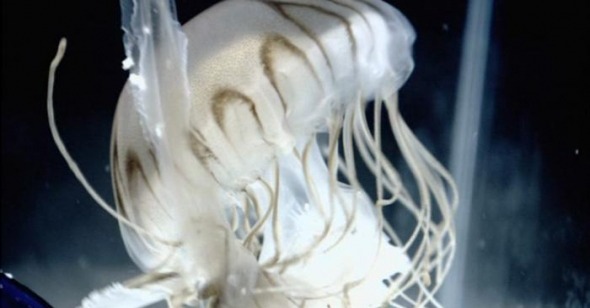 Driven to Distraction
by James Crawford

Writing on Shakespeare’s Othello, Samuel Taylor Coleridge famously spoke of Iago’s “motiveless malignity,” noting that at the play’s closing, that Iago cannot provide a satisfactorily convincing reason for revenging himself upon Othello. A similar situation plays itself out in Kiyoshi Kurosawa’s Bright Future. Kurosawa has always explored metropolitan anomie to chilling and profound effect, and in Bright Future he may have hit upon a perfect synecdoche of its manifestations with the preternaturally calm and detached Arita (Tadanobu Asano), who murders his boss and his family and never gives justification.

Arita is one half of a slacker duo with Nimura (Jo Odagiri), both of whom work at an industrial laundrette. Their lives each have a singular pleasure—Nimura’s is a video arcade, Arita’s a deadly saltwater jellyfish that he’s slowly acclimating to freshwater—and are left to their own devices, until their employer attempts to make friends. Mr. Fujiwara enlists their help in moving his daughter’s desk, and soon he’s borrowing Nimura’s CDs, crashing Arita’s apartment, and waxing poetic about his own virile youth. None of it adds up to annoyance worthy of murder, yet one evening, Arita does the deed and bequeaths the jellyfish to his buddy.

What follows feels like comfort food; that organic, expansive warmth felt after a good meal. Perhaps that statement—controversially glossing over the a brutal murder as if it’s of no consequence—puts me in with that generation Kurosawa is examining, but following the murder, Bright Future seems less interested in explaining Arita’s motivations than the non-traditional relationship that subsequently blooms. In the vacuum left by Arita, Nimura and Arita’s father find each other, reciprocally functioning as respective son- and father-surrogates. While working in Dad’s salvage business, they putter about town, picking up discarded appliances, and taking them back to the shop for repair. They also become co-custodians of the jellyfish, and the only two people in all of Tokyo (save for a band of dilettante video-game obsessed youth with whom Nimura falls in with as they run amok) who marvel at (but do not fear) the cnidarians when they are accidentally introduced into the city’s waterways. And not without reason: The jellyfish are luminously red, the only bright elements in a cityscape blanched of all colour and feeling, and as such it’s easy to get past the fact that these creatures pose a perpetual deadly threat.

Like Charisma’s tree, the jellyfish in Tokyo are another environmental allegory, this time speaking to the incompatibilities of natural and artificial environments. Sealed off from one another, the sea creatures and the city pose no mutual threat, but commingled, the effects are disastrous, with a spate of civilian attacks making the nightly news. The message is that the modern metropolis has become so inorganic and rigidly structured and directed, so inured to the potentials and pitfalls of natural life, that when foreign organisms are introduced—especially a jellyfish, whose undulations are the very epitome of random organic movement—catastrophe will ensue. Like a body that has forgotten its immunity to diseases, the city succumbs because it has forgotten its innate defenses. Kurosawa repeatedly puts the jellyfish out there as a grand signifier just waiting to be explained, but never follows through, thus allowing for any number of interpretations. There’s also an added dimension to Bright Future, which plays with the nature of signifiers themselves. In one of Nimura’s prison visits, Arita muses that no one will ever guess why he committed murder, a synecdoche for the futility of attempting to interpret symbols. So: it’s possible (and even advisable) to appreciate the enrapturing visuals of a resplendently red, undulating armada floating its way down inky canals—without scrabbling desperately to find Meaning.

For the Tokyo youth in Bright Future do not themselves scratch beneath the surface of symbols. After the Arita-Father-Nimura drama has played itself out, Kurosawa returns to the aforementioned band of dissolute students who spend their days meandering through the city, for a tidy coda. Idly lounging in a coffee shop, they muse about Nimura’s departure, remarking “He was a real whacko…but I had a lot of fun”—personal pleasure is more important than Nimura’s troublesome, antisocial behavior. There’s an obvious overtone of misspent youth, but a certain non-judgmental attitude as well. These kids don’t do much but leave themselves open to the possibility of unencumbered wonder—they embody a “bright future” that is blissfully ambiguous.