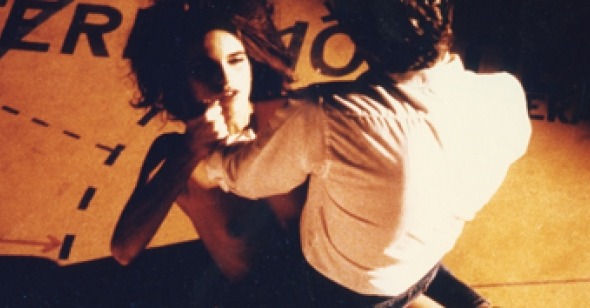 Throw Down
by James Crawford

An underwater view of a buxom brunette forcibly drowned in a bathtub; out of the water, a man in a black trenchcoat shoves her head below; back underwater, her eyes are bugged, her body stillвҖ”with the first three shots of Matador, Pedro AlmodГіvar announces that heвҖҷs about to show you some serious shit. ItвҖҷs a full-bore beginning that seems to augur an intensely brooding experience of viscera (and sexual violence), but then AlmodГіvar immediately sets about obliterating and remoulding the content of his paratext (i.e,. those three shots heвҖҷs obviously borrowed from an exploitation slasher flick), turning it into something meditative, then ludicrous.

Cut away from gloved hands unfolding a razor blade to see a male face caught auto-flagrante delictoвҖ”a past-his-prime Matador, Diego (Nacho Martinez), masturbating to, and obviously getting off on, the gore flickering on the television screen before his eyes. DiegoвҖҷs ever-intensifying gasps (not to mention the rhythmic squelching of him furiously assaulting his member) mingle with the cries of nubile girls being variously slashed, decapitated, and otherwise violated, and the camera cuts back and forth between his droopy, slack-jawed, and generally ecstatic countenance and the bloody, horribly disfigured faces onscreen. And then once more, AlmodГіvar shifts gears, cutting to a sidelong view and yielding up the spatial relationship between Diego and the images. Our Matador lies half-in, half-out of an armchair, gratifying himself as his feet lie on either side of the television set; heвҖҷs absurdly close to the screen. Not more than two minutes long, the opening mutates from a straightforward exaltation of exploitation tropes, contextualizes exploitation by suggesting that it could be an object to induce sexual pleasure, but then finally blows that proposition off its moorings by hyperbolizing it, by revealing its inherent humor and ridiculousness. Efficient in its satire, the scene sharply excoriates our fascination with psychosexual (so-called) perversion even as it seems to celebrate the succulent potentialвҖ”outrageous dialogue; incendiary images of sex and death, etc.вҖ”that said вҖңperversionвҖқ presents to filmmakers. (Because until Sharon Stone put the genre safely to bed with her Skeletor routine in Basic Instinct 2, a good erotic thriller was good for controversy, box office, and the opportunity for directors to safely hazard their most outlandish ideas.) As such, Matador is frequently maddening because it meets its untenable paradoxes head-on with nary an attempt to resolve them, and displays its internal inconsistencies as a badge of hard-won honor. But the mark of AlmodГіvarвҖҷs talent is that he passes off his insights with such merriment that the film nimbly skirts around the mire of simple genre parody and gets down to the hard task of reworking, with blithe insouciance, the rather abnegating and guilt-ridden relationships that people seem to have with their own bodies (and the potential pleasures derived from them).

Given its mercurial tendencies, Matador demands rapt and unwavering attention, and not a little bit of patience, because one is never sure of a momentвҖҷs disposition (or position with respect to the whole) until that moment has fully played itself out. The filmвҖҷs tone shifts across sequences, within scenes, and sometimes even from beat to beat. Consider, for example, Antonio Banderas, playing a strangely sexless matador-in-training, Angel, under DiegoвҖҷs tutelage whoвҖҷs desperate to lose his virginity. Taking his masterвҖҷs wordsвҖ”вҖңTreat a woman like a bull. Let her know whoвҖҷs bossвҖқвҖ”far too literally, Angel decides to pop his long-preserved cherry by tracking down Eva (Eva Cobo) a woman who lives across the courtyard (and just so happens to be DiegoвҖҷs girlfriend), dragging her into an alley, and raping her. The scene, simultaneously harrowing and humorous, involves fumbling with a Swiss Army knife to find an appropriate tool to hold at the victimвҖҷs throat, premature ejaculation, Angel apologizing for his deed and subsequently passing out in the alley when he witnesses blood on EvaвҖҷs face. By blithely tossing off one of the worst things that one human being can do to anotherвҖ”his attempts at rape are a travestyвҖ”AlmodГіvar is essentially spoiling for a fight with the conservative element. The director seems to be goading the Catholic Church in particular, which becomes more evident as the rest of the story unfolds.

Overcome by guilt, Angel turns himself in to the police, yet that guilt seems less related to the attempted rape than it is transferred via umbilical chord. AngelвҖҷs mother is absurdly pious, her only consort a liveried priest whoвҖҷs no doubt responsible for her incessant, rote tirades against bodily sin (and the forbearance required to avoid it). She censors her full-grown sonвҖҷs activities, admonishing against the sins of narcissism and covetousness, and daily consummates her faith by corporal moritification, cinching a cilice (a spiky metal belt), around her upper thigh. Small wonder then, that Angel, infantalized by life under this oppressively pious regime, exorcizes his sexual frustration in such violent fashion. Though when called in for questioning, Eva contradicts every established fact of AngelвҖҷs attack, denying even that the sexual assault took placeвҖ”Angel ejaculated on her leg, she saysвҖ”and the police release him from custody; but consumed by the religiously and parentally induced need to atone for something, anythingвҖ”original sin, his own latent perversionsвҖ”he confesses to a spate of serial murders he did not commit.

The universe of an AlmodГіvar film is nothing if not predictably hermetic, and so it naturally follows that the woman agreeing to represent Angel is someone already knotted into the filmвҖҷs weave. After MatadorвҖҷs incendiary, delirious beginning, we witness the lithe, young Maria (Assumpta Serna) behaving like her own matador: seducing a man and then, at the moment of climax, inserting knife disguised as a hairpin, killing him instantly. As her introduction is cross-cut with Diego teaching his pupils to dispatch actual, not metaphoric bulls, Maria becomes metonymically liked to him, and so itвҖҷs only a matter of time before the two meet up and screw each other. (It becomes increasingly obvious that Diego is responsible for the murders to which Angel has confessed, and thus the two even have literal, matching bodies-in-the-closet.) Subsequently, AlmodГіvar, as though bored with his host of stupefying, repressed characters, instead devotes his considerable energies to celebrating (yes, celebrating) two aberrant outsiders who are wholly engrossed in each other, sex, and death. Though not necessarily in that order.

Trailing in their trashy wake, Matador digresses so that AlmodГіvar can muse on any number of his standard predilections, among them the mutability of gender/sexuality, the difficulty of successive generations understanding each other, and the ideal of femininity (the last of these, the contemporary structures that arbitrate standards of feminine beauty, is neatly excoriated as AlmodГіvar depicts a fashion show featuring whores, dilettantes, junkie models, and clothes, frequently vomit-covered, that look as though theyвҖҷve been scrounged from festering dumpsters). But the one idea that obsesses AlmodГіvar throughout is that of liebestod; Eros and Thanatos, the mingling of sex and death. While I understand that itвҖҷs a concept present in everything from ancient mythology to modern narrative, IвҖҷve never understood why the liebestod has gained such purchase in scholarly circles, because it seems to be a facile, syntactical observation without the attendant semantic relevance. Matador is the only film/book/play I have come across that essays liebestod in a satisfactory manner, mainly because it directly confronts its inherent contradictions, sending them up and embracing them at the same time: вҖңTo stop killing is to stop living,вҖқ Diego opines; вҖңI love you more than I love my own death,вҖқ Maria purrs in a later scene. AlmodГіvar revels in straining through boundaries to reach some kind of transcendence, truth, or purity, as fraught as those ideas are, and here he does so by taking characters and their absurd pronouncements at face value. Matador is heady and enthralling because itвҖҷs both preposterous and uber-serious, readily assimilated, and slippery as oil. Once all is said and done, and Diego and Maria become beatifically intertwined in their ultimate clinch, it forces one to step back and wonder, What did I just see?