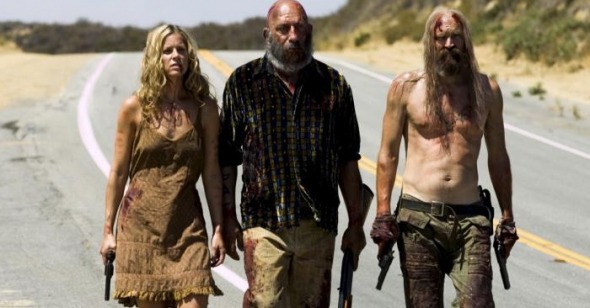 To the Gallows
by Nick Pinkerton

When a friend recently noted that my taste in horror flicks tended toward the ‚Äúgrim and serious,‚ÄĚ I had to balk‚ÄĒwe‚Äôre talking about horror movies after all! But I may be in a minority by virtue of taking that grimness for granted. A lot of my theatrical experiences suggest that much of the horror audience demands and expects nothing more from these movies than a laugh. When I attended Halloween horror marathons back in Ohio, there‚Äôd always be a significant portion of the crowd‚ÄĒobnoxious dorks in Evil Dead tee-shirts‚ÄĒwho‚Äôd paid their admission just for the privilege of snorting incredulity at whatever came onto the screen; they never imagined that anyone would come to these mangy movies for any reason other than to jeer them on. New York‚Äôs audiences haven‚Äôt proven much different: At a recent MOMA screening of Michael Reeves‚Äôs 1968 Witchfinder General many of the moviegoers‚Äô condescending titters at that film‚Äôs autumnally rotten, bleak Brueghal medievalism approached open contempt.

It would just be ahistorical thesis-chasing to propose that a solid wedge has ever existed between what makes people either laugh or scream at the movies. The way we react to films, horror films particularly, is way too complex to allow a clean delineation: there‚Äôs always been a gallows drollery to late-night local TV horror hosts, Alfred Hitchcock presentations, and chattering crypt-keepers. It‚Äôs part of the covert compact between entertainers and audiences that, of course, what‚Äôs coming up on screen will only deliver a fraction of the scares promised, that Norman Bates‚Äôs mother is just a lame paper mach√© ‚ÄúBoo!‚ÄĚ etc. But much of the laughter I‚Äôve heard at horror movie screenings is different‚ÄĒit‚Äôs laughter at something that seems strange or awful or awkward or run-down; nervous, protective, scornful laughter intended to diffuse these shabby nightmares. It‚Äôs the laughter of self-congratulating viewers who like the assurance that they‚Äôre a little bit better than horror movies; The Devil‚Äôs Rejects, for all its virtues, caters to that crowd.

Rob Zombie, who in the days of fronting his lame Ozzfest act White Zombie resembled nothing more than one of those old horror hosts crossed with a touch of Brazilian gore-maestro Coffin Joe, has presented a second directorial outing heavy on the tongue-in-cheek. It isn‚Äôt a horror movie so much as a ‚Äúhorror‚ÄĚ movie, a consciously retro throwback that affectedly ticks off signifiers, icons, and tropes with a completionist‚Äôs zeal. The film‚Äôs cast is a litany of familiar faces from the cult canon, a veritable Chiller Theater convention worth of them: Dawn of the Dead‚Äôs Ken Foree, Spider Baby‚Äôs Sid Haig, The Hills Have Eyes‚Äô Michael Berryman, Warhol/ Paul Bartel starlet Mary Woronov‚ÄĒnary a performer involved in this production comes without a pop pedigree.

Set in the mid-seventies, shot on noisy 16mm stock, with images wreathed in lens flare and the hazy mellow gold of California sun‚ÄĒthe setting is southern, but the vibe is pretty cosmic cowboy‚ÄĒRejects wears all the accoutrements of a venerable grindhouse sickie. But even in its nastiest moments, like Bill ‚ÄúChop Top‚ÄĚ Moseley reprising Willem Dafoe‚Äôs motel room ‚ÄúFuck me‚ÄĚ mind-rape in Wild at Heart with Priscilla ‚ÄúTerri from Three‚Äôs Company‚ÄĚ Barnes filling the Laura Dern spot, there‚Äôs always a release valve around the corner, a dirty joke or a screwball wink-wink scene with a podunk town‚Äôs local Gene Shalit look-alike film critic (!). It‚Äôs a movie that seems to be aiming for ‚Äúharrowing‚ÄĚ but which can‚Äôt then commit itself to a level of out-there nihilism that risks being laughed at rather than with. Even the film‚Äôs finale, a shoot-out set to the ‚ÄúFree Bird‚ÄĚ solo‚Äôs endless triple-guitar crescendo, feels frustratingly opaque, equally readable as lighter-in-the-air sincere or carpetbagger-sniggery parody.

The Devil‚Äôs Rejects is a funny if steadfastly unaffecting movie‚ÄĒZombie, who also wrote its screenplay, obviously has an ear for idiosyncratic, picked-up bits of redneck argot. His dialogue is close in spirit to Tarantino‚Äôs best lowlife blue-comedy jive sessions‚ÄĒyou can easily enough imagine Cheech Marin‚Äôs brothel barker in From Dusk Till Dawn (‚Äúvelvet pussy, silk pussy, Naugahyde pussy‚ÄĚ) outside the whorehouse in Rejects (sign out front: ‚ÄúClean pussy, VD Tesed, Come Again‚ÄĚ).

The thing that always gets left behind in these rummages through the genre attic is the subsumation of ego that came with working inside formula movies‚ÄĒit‚Äôs hard, unostentatious work, and it took a good squint to notice a director with uncommon dexterity at going through the motions. When Rob Zombie makes a horror film or Tarantino makes a chop-socky actioneer, movies about the movies they like, it‚Äôs a lot easier on filmmaker and critic alike‚ÄĒlike the Zip-A-Tone comic book panels that, presto, turn into art when they‚Äôre blown up and framed; a bit of distance from the material spins trash into gold.

The recent Warner Brothers‚Äô House of Wax, a horror movie in the strictest sense of the word, hit theaters without the benefit of any postmodern armor plating, and as such made a fat pinata for the fourth-string critics who‚Äôre always called in to write about thrillers. These ill-informed tastemakers love to squeeze out a sanctimonious sentence or two about Hollywood‚Äôs dearth of ideas whenever confronted with a remake, though I don‚Äôt think I saw any reviewer who bothered to make the requisite imdb.com trip, which would‚Äôve revealed that Andre De Toth‚Äôs well-known 1953 House of Wax was itself a remake of 1933‚Äôs Mystery of the Wax Museum by Michael Curtiz, itself a rendition of Charles Belden‚Äôs stage story‚Ä¶

That the film was an adroitly-shot inventory of perversities, bustling with inventive murder and anchored by Brian Edmonds‚Äô great, creepy sets, didn‚Äôt seem to resonate with writers hung up on the film‚Äôs novelty casting of Paris Hilton‚ÄĒnever mind that in 25 years she‚Äôll be every bit the kitsch grand-dame as Rejects‚Äô P.J. Soles. The movie‚Äôs opening intertitle reads ‚Äė1974,‚Äô introducing a prelude illustrating its villain‚Äôs boyhood, but House had the temerity to leave that decade behind, eschewing pop archaeology to attend to the ungrateful business of being a savage, efficient shocker. It‚Äôs a horror film in the present tense, and the allusions it does contain‚ÄĒWhatever Happened to Baby Jane? playing at the theater in the small, strange town of Ambrose (a nod to writer Bierce, the author of some potent tales of the bizarre?); an oozing House of Usher finale‚ÄĒare worked into the material, not ostentatiously draped across it. It confirms the life of the genre rather than bronzing it in homage.

I can‚Äôt build up too much rancor towards The Devil‚Äôs Rejects‚ÄĒit succeeds on its own terms, channeling the rottenness and raunch of a gas station bathroom stall or waking up still-stoned and sweaty to blaring classic rock on a hot afternoon. What bothers me is the persistence of critics who flatter their discriminating taste by placing ‚Äúhorror‚ÄĚ above horror. When Roger Ebert back-pats Zombie‚Äôs ‚Äúmordantly funny approach to the material‚ÄĚ in Rejects, it just goes to illustrate the sad fact that the only way a horror movie can get a break is through the implication that it‚Äôs not taking itself, or its genre, too seriously.