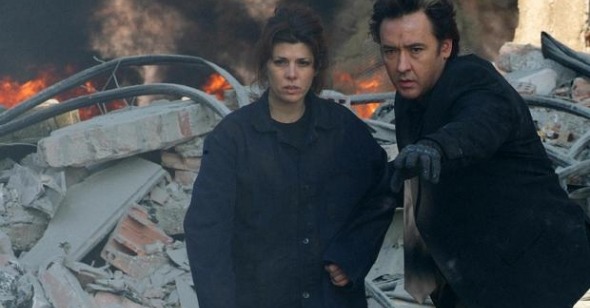 Profit and Loss
By Caroline McKenzie

Iqaluit, Nunavut, perhaps isn’t the most likely locale for a satire on contemporary American politics, but this is where the John Cusack vehicle War, Inc. begins. An establishing shot shows Cusack trudging through the snow and into the self-anointed “Eastern Arctic’s #1 Bar”; in case anyone missed the joke, the next shot cuts to a close-up of this declaratory sentiment inscribed above the pub’s door. Within the first 60 seconds, it is already obvious just how little respect director Joshua Seftel has for the audience of his painfully unfunny film.

Criticizing the Bush administration is a risk-free strategy these days, present as it is in a wide range of contemporary popular comedies from American Dreamz to Harold and Kumar Escape from Guantanamo Bay. War, Inc. fits comfortably in this trend, setting its story in the fictitious Central Asian country Turaqistan. This transparent stand-in for Iraq is occupied by a equally transparent stand-in for Halliburton: a multinational corporation called Tamerlane which is, in turn, owned and operated by the U.S. vice president emeritus (Dick Cheney, by way of Dan Aykroyd). After a flurry of guess-the-political-reference exposition, an assassin-for-hire named Hauser (John Cusack), is sent to Turaqistan to kill an oil baron at Tamerlane’s behest; his cover is to produce a Tamerlane-branded trade show celebrating the influx of American consumer culture into Turaqistan. If these contemporary political touchstones feel stale straight out of the box, it’s not only because this form of popular satire is near ubiquitous but also because the script, written by Cusack, Mark Leyner, and Bulworth scribe Jeremy Pikser, has been kicking around Hollywood for nearly five years.

Amid glib renderings of Turaqistan’s contemporary war-zone trauma (“humorous” takes on hostage videos, suicide bombings, etc.), the film’s narrative arc unfolds in a similarly transparent manner. A politically aware and attractive journalist (Marisa Tomei) helps transform Hauser from a bitter mercenary to a caring family man by opening his eyes to the horrors of American capitalism and warmongering, and by leading him through a half-dozen plot devices.

The target of the film’s criticism is not so much the war as it is American capitalism and its nefarious globalization methods. After visiting the Turaqi branch of Popeye’s Chicken that houses Tamerlane’s HQ, Hauser spouts platitudes about business as a response to crisis and branding as a way of soothing open wounds. Director Seftel’s attempts at satire in the film depend excessively on sight gags of capitalism-run-amok, as the tanks that roll through Turaqistan display Nascar-style banner ads, and the trade show employs Turaqi bomb victims with metal artificial limbs to do chorus-line high kicks to advertise a titanium alloy company.

By making a film that refuses to do anything besides pander to the lowest common denominator with bathroom humor, stereotypical plot lines, and terrible pop songs, Seftel has, instead of making a viable critique of capitalism, quite clearly made the point that the medium is indeed the message. It doesn’t help that Cusack—the ultimate brand-name actor due to his nearly identical “everygeek” shtick from film to film—is in the lead role. While Seftel seems quite aware that one can’t expect democracy to flourish by littering Middle Eastern countries with American culture, unfortunately he failed to realize that one cannot throw a handful of Iraq references onto the Grosse Point Blank template and come out with anything resembling a definitive statement on the contemporary political climate.

One of the unwittingly amusing elements of the film is Hilary Duff, who appears with a black dye job, dark eye-shadow and a Borat-worthy accent to portray a Central Asian version of herself: a manufactured pop star named Yonica Babyyeah, who is being used by Tamerlane/the film as a marketing tool. But War, Inc.’s usage of Duff as a racial other seems problematic, as does, conversely, Sir Ben Kingsley’s appearance in the film as a deep-fried, deranged Colonel Sanders type. It is hard to believe that Seftel is here consciously satirizing problematic racial depictions in contemporary cinema; similarly, when the film subtitles the accented, but easily comprehensible, English-language dialogue of Hauser’s assassination target, it is difficult to imagine that it’s commenting on the seeming inability of American moviegoers to follow foreign dialects, rather than of succumbing to it.

As a whole, War, Inc. is so beholden to time-tested dramatic conventions and sight-gag humor that it is doubtful it had any higher aspirations than coasting on trendy Bush-bashing and Cusack’s transparent, recently developed social conscience (e.g. Grace Is Gone). That the film’s conclusion apes the stereotypical Hollywood ending by depicting the heteronormative family unit of Tomei, Cusack, and Duff escaping the Middle East in a horribly rendered CGI plane only underscores the fact that War, Inc. is no more than an ugly byproduct of the mass-produced culture it so wishes to satirize.