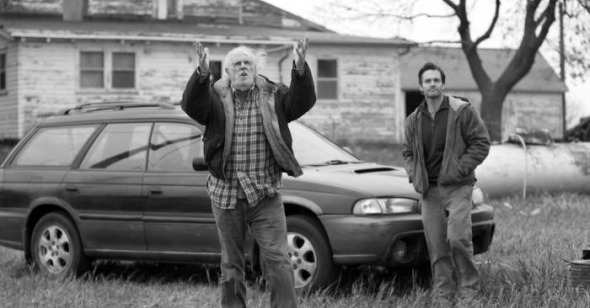 State of the Union
By Elbert Ventura

Halfway through Alexander Payne‚Äôs remarkable Nebraska, a man walks into a newspaper office in his father‚Äôs childhood town and learns that the woman who runs the place was the old man‚Äôs sweetheart long ago. The editor, all smiles and shucks, regales him with stories of the codger in his friskier days, even showing him archival stories of his dad‚Äôs youthful exploits. David (Will Forte), whose father seems to be showing the first signs of dementia, can only gaze in wonder at the young man staring back from the musty pages.

The scene echoes a moment in Payne‚Äôs previous film, The Descendants. As real-estate lawyer Matt (George Clooney) ponders whether to sell to developers an Edenic beachfront that has been in the family for generations, Payne glides away from the action to linger on photographs of Matt‚Äôs ancestors. Both moments, unhurried and unforced, transmit a simple idea: beneath the present lie layers of stories and histories, the stuff that our lives are made of. Implicit in the reminder is a plea: let‚Äôs resolve to earn what our progenitors have left us‚Äîeven if, as in the case of Nebraska, it‚Äôs not that much at all.

It‚Äôs an ennobling theme that has deepened Payne‚Äôs recent work. Some critics have balked at the evolution. Although widely praised, The Descendants was diminished by a minor backlash: What happened to the acerbic tang of earlier Payne, some critics wondered? For this viewer, the director‚Äôs turn toward the mellow and introspective was a surprising and welcome development. Unexpectedly cosmic in its reach, The Descendants may not have been as grand as the same year‚Äôs Tree of Life, but it grappled successfully with similar concerns‚Äîand the surprise was that the earthbound satirist of Citizen Ruth and Election could pull it off.

Nebraska confronts the same questions about mortality, legacy, and value‚Äîit could‚Äôve been called The Descendants too‚Äîbut locates them in more humdrum territory. Dave‚Äôs road trip with his father, Woodrow T. Grant (Bruce Dern, as good as advertised), takes them from their home in Billings, Montana, to Lincoln, Nebraska, with a lengthy pit stop in fictional Hawthorne, where Woody grew up. Sure enough, folks from the past come out of the woodwork. Old resentments are dredged up; unfinished business demands resolution. The excursion is a revelation for Dave, who sees unfold in front of him an entire untold history that restores the identity of a deteriorating father.

The movie‚Äôs portrait of the old coot isn‚Äôt airbrushed. Woody, we learn, wasn‚Äôt a saint‚Äînor was he a monster. He was decent at times; was unkind at others; drank too much; didn‚Äôt save enough; never asked for handouts; married and had kids without much thought; tried as best he can. The road trip came at his urging. When the movie opens, he‚Äôs seen trudging on the shoulder of an interstate, his straggly mane billowing in the wind. He tells a highway patrolman that he is walking to Lincoln to collect a million-dollar prize promised by a magazine promotion. When Dave tells him he can‚Äôt do that, Woody retorts that Dave should drive him then. Seeing an opportunity to get away for a few days from a dead-end job and a recent break-up, Dave relents. And so they pack up the car and drive east, back toward the heartland Woody and his wife (June Squibb, doing wonders with a role that could‚Äôve been a caricature) left behind decades earlier.

The retreat from a frontier that once promised so much casts Woody‚Äôs journey as a rebuttal of the national narrative. ‚ÄúGo West, young man,‚Äù the saying goes; the young Woody did; it didn‚Äôt turn out so great. But the film is less a reproach of manifest destiny than a reminder that two-plus centuries of the American experiment have yielded nothing definitive‚Äîit‚Äôs still a work in progress. Woody himself makes that point out loud: Along the way, the two stop at Mt. Rushmore; as Woody stares at the faces etched in stone, he grumbles, ‚ÄúDoesn‚Äôt look finished to me.‚Äù

In Nebraska, Payne revisits The Descendants‚Äô circle-of-life ruminations but reimagines them in a social and political context. The title itself suggests an interrogation of something larger than a father-son relationship. This American anthem abounds in signifiers of national identity: Big Sky expanses of farmland, highways as far as the eye can see, a final promenade down Main Street. The presence of Mt. Rushmore and ‚ÄúWoodrow Grant‚Äù invoke at least half a dozen presidents; the name itself seems a deliberate allusion to Grant Wood, that iconic artist of the heartland.

What transpires on this canvas amounts to a state of the union. Regret and loss hang heavy over the landscape. The premise‚Äîa delusional man on a quest to claim a non-existent prize‚Äîmay seem flimsy-cute, but it deepens into something genuinely moving. Even with his son telling him the prize isn‚Äôt real, Woody persists in believing the illusion. By the end, confronted with the possibility that they may not make it to Lincoln after all, Woody‚Äôs stoic fa√ßade finally crumbles: He wanted the money so badly, he says, not because he wanted a new truck, as he‚Äôs been telling everyone, but because he has little to leave his boys when he‚Äôs gone. It is, in the wake of the Great Recession, nothing less than a national lament.

That obsession with inheritance takes on deeper shades in light of how men like Woody have been depicted in our culture and treated in our politics. A veteran of the Korean War, Woody belongs to a generation that has been lauded as the Greatest. And yet for all our talk of that generation‚Äôs heroism and sacrifice, our politics have been eager to cast them as a burden on the public coffers and a threat to our solvency. Payne doesn‚Äôt go so far as to call for raising Social Security benefits, but Dave‚Äôs final gestures of generosity and filial affection (I‚Äôll leave them unspoiled here) also double as an affirmation of a fraying social compact.

Dave‚Äôs actions prove even more moving juxtaposed with Woody‚Äôs old-school, postwar, Midwestern stoicism. Part of what makes Nebraska‚Äôs meditation on history, both personal and national, poignant is Woody‚Äôs refusal to engage in it. When Dave and his brother Ross (Bob Odenkirk) ask Woody to see his childhood home, he replies gruffly, ‚ÄúWhat for?‚Äù That house, on a fallow farm in the middle of the plains, has long been abandoned, pipes and wires all torn out and the walls barely holding up. Walking around the place with his wife and two sons, Woody tells them that it was constructed by his father with his own hands‚Äîand that life in it wasn‚Äôt especially happy. Here in the middle of the heartland, Dave can place his own unsatisfying life in context, and learns to appreciate the difficulty of that previous era, when lives had to be built from the ground up. As they wander the empty rooms, Woody the survivor seems little more than a ghost, lingering in the haunted spaces he‚Äôll occupy soon enough.