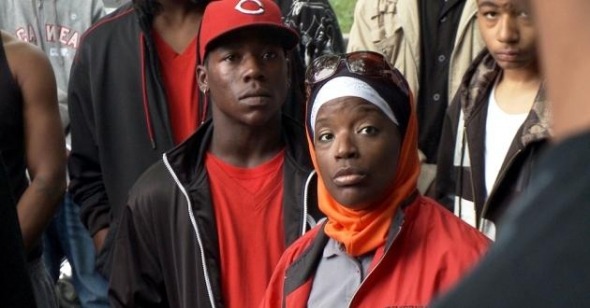 In the Middle
by Benjamin Mercer

In The Interrupters, a valuable yet seemingly incomplete documentary, director-producer-cinematographer-editor Steve James (the codirector of Hoop Dreams) and producer-interviewer Alex Kotlowitz (the author of There Are No Children Here) shadow three ‚Äúviolence interrupters,‚Äù all of them employees of the Chicago-based organization CeaseFire. The goal of the interrupters‚Äîthemselves all rehabilitated gangbangers‚Äîis to ‚Äúsave a life,‚Äù largely by attempting to short-circuit the impulse toward retaliatory action (they seem to have made a specialty of counseling those likely to plot revenge killings) through carefully calibrated real-talk. ‚ÄúYou have to immerse yourself in the bullshit,‚Äù says CeaseFire director Tio Hardiman of the work. In their admiring (though certainly not sanitized) portrait of three interrupters‚ÄîRicardo ‚ÄúCobe‚Äù Williams, Eddie Bocanegra, and Ameena Matthews, the daughter of notorious Chicago gang leader Jeff Fort‚ÄîJames and Kotlowitz dutifully show the extent of that ‚Äúbullshit,‚Äù which encompasses not only senseless gangland brutality but also the ingrained hostility of many young adults in rough-and-tumble Chicago neighborhoods like the Ville and Altgeld Gardens. ‚ÄúFuck a problem, fuck a solution,‚Äù says a hothead named Flamo during one of the film‚Äôs many high-pressure talk-downs. Some of the film‚Äôs other most searingly intense passages‚Äîlike CeaseFire school visits in the wake of the death of Derrion Albert, whose beating with a large wooden board was caught on video and posted to YouTube‚Äîunderscore the immensity of the challenges facing the interrupters.

But this is certainly not a film about futility and hopelessness. By the end of the movie‚Äîwhich an opening title card announces as ‚Äúone year in the life of a city grappling with violence‚Äù‚ÄîFlamo has gotten a job as a uniformed attendant at the Racine stop on the Blue Line. An interrupter is also present as a class-X felon named Lil‚Äô Mikey apologizes to the owner of the barbershop he robbed years earlier, a coming to terms that becomes the film‚Äôs most bracing moment; Mikey also eventually finds employment, as a groundskeeper of sorts for a local child-care center (James also observes him tucking a kid in at nap time). The film stops short of proffering violence interruption as a catch-all solution to the problem of inner-city bloodshed‚Äîother subjects, such as Caprysha, a troubled teen Ameena takes under her wing, seem responsive to the interrupters, only to revert to delinquent behavior‚Äîbut it is deeply invested in showing, on both a scene-to-scene level and through these bigger-picture character arcs, that inner-city violence is a problem about which something can be done.

CeaseFire‚Äôs approach is depicted here as almost scientifically precise‚Äîrather counterintuitively so, considering the delicate interpersonal dynamics involved. As the film lets the organization‚Äôs epidemiologist founder explain, CeaseFire takes the idea of violence-as-plague quite literally: Gary Slutkin appears briefly, speaking of combating the gang-violence infection by cutting it off at its source. This public-health party line seems to trickle down. The head-scarved Ameena in particular goes about the ground-level work with an almost surgical precision. Her street-corner sermons about leading an exemplary life are high-wire theater of extraordinary persuasiveness. She demands respect, and receives it, with exactness and efficiency. Tio describes the mother of four as a ‚Äúgolden girl‚Äù; her husband gives voice to his concern that every day she‚Äôs putting it ‚Äúall on the line‚Äù out there.

It is essentially inarguable that the violence interrupters are doing good work, but the film‚Äôs portrayal of them suffers from some imbalances. The Interrupters too often feels like a promotional reel for CeaseFire in its rather uncritical relating of the organization‚Äôs guiding philosophies. Certainly there would be some divergence of opinion on how to deal with a rash of violence like the one that erupted in Chicago in 2009 and 2010, but no dissenting takes are thoughtfully explored‚Äîother than the deployment of the National Guard, an idea floated by two area politicians that causes no small uproar in the communities most convulsed by violence. The documentary‚Äôs hardest-hitting questions come during a one-off behind-closed-doors CeaseFire presentation, where an attendee from South Africa asks whether the work of the interrupters ever causes conflicts with law-enforcement officials. James and Kotlowitz seem to have taken Slutkin‚Äôs assertion that his organization is ‚Äúnot in the good and bad game‚Äù to mean that its work is entirely unimpeachable. Even if public officials (glimpsed only briefly in city press conferences) or outside experts were to corroborate this, or to provide a few additional facts about the scope of the problem CeaseFire is confronting by degrees, The Interrupters would be a more evenly shaped documentary.

Imbalances aside, in isolated glimpses of neighborhoods struggling to contain their downward-spiral turmoil, The Interrupters is wrenching. James‚Äôs cinematography is also consistently fine for this type of on-the-ground documentary‚Äîas during a tour of makeshift shrines, flanked by empty bottles of Hennessy; at one of these memorials a photo of the deceased catches the wind and flips over to reveal a message: ‚ÄúTo Shane, We Will Miss You.‚Äù As a film about the functioning of an institution, The Interrupters often plays like an advertisement, but James and Kotlowitz excel at collecting devastating particulars. It‚Äôs when it bears witness to individual stories of reform in progress (Lil‚Äô Mikey finally taking responsibility for his crime, or the interrupters performing their rituals of atonement for past misdeeds) that The Interrupters best makes its own case.