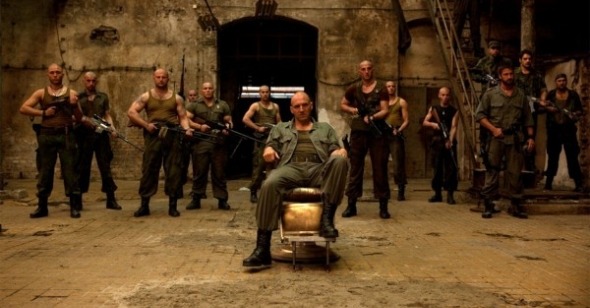 Man of War
By Elbert Ventura

Ralph Fiennes‚Äôs Coriolanus is the work of an actor obsessed. Fiennes first tackled the part of Shakespeare‚Äôs opaque Roman general on stage in 2000‚ÄĒthen nursed a decade-long fixation to bring the infrequently staged play to the screen. The monomania of the performer, stuck on the role, holding his character up to the light and inspecting it from every angle, permeates Fiennes‚Äôs intense directorial debut. In other hands, the character Coriolanus can come off as a thesis with a sword or a Chigurh-esque cartoon. But Fiennes privileges this slab of granite with a soul. The play complicates our understanding of politics, democracy, leadership, and war; the movie is first and foremost a study of a man.

One of Shakespeare‚Äôs last tragedies, Coriolanus has been famously difficult to mount, not least because of its prickly protagonist. Caius Martius Coriolanus is a military hero, beloved by the people for his exploits, and recruited into politics by his friend Menenius, a senator. But the hard, noble warrior has no use for public life‚ÄĒor the plebeians whom the government is supposed to serve. For their part, the people are angry about their plight, eager for a leader, and easily swayed by mountebanks. The clash between a populace that just wants to be led and loved, and an esteemed warrior who has little use for them ultimately leads to Coriolanus‚Äôs banishment‚ÄĒand a far worse fate for Rome.

Shot in present-day Belgrade, which lends the movie an authentically depressed and dilapidated quality, Coriolanus prunes the original play but preserves the language, even as it has suited politicos speaking it. But Fiennes and screenwriter John Logan are judicious in their transpositions‚ÄĒthey don‚Äôt strain to make every detail legible for a contemporary audience. Cable news may hum in the background, but the political intrigue and procedural details are unchanged from the original, and the place still calls itself Rome.

Caius Martius is introduced fending off protesters‚ÄĒshades of the 99 percent‚ÄĒdemanding access to food the government is allegedly hoarding. ‚ÄúYou‚Ä¶fragments,‚ÄĚ he snarls. But a more dangerous assignment follows. The general leads an assault on the hated Volscians in the city of Corioli, where he meets his nemesis, Aufidius (Gerard Butler). Block-by-block gun battles give way to a mano-a-mano confrontation between the two. The bout ends in a draw, but the Romans win the city. Caius‚Äôs prize is to be awarded the honorific ‚ÄúCoriolanus‚ÄĚ and a new career as a statesman. There is only one hitch: The proud warrior is distinctly uncomfortable with the self-aggrandizement that comes with politics, and can barely conceal his distaste for the public.

The play is predicated on a series of reversals. The first comes when the people, incited by tribunes who despise the fast-rising Coriolanus, reject his bid for the Senate and boot him from the country. That‚Äôs followed by an even more shocking turnabout, when the exiled Coriolanus seeks out his archrival Aufidius and plots his return to Rome at the head of a plundering army. The play‚Äôs emotional high point and culminating reversal comes when Coriolanus‚Äô mother, Volumnia (Vanessa Redgrave); his wife, Virgilia (Jessica Chastain); and their son, young Marcius (Harry Fenn), visit Coriolanus and beseech him to agree to a truce‚ÄĒand he relents.

These twists are difficult to pull off persuasively, and the demands of verisimilitude offer further challenges. On stage or the page, the citizens of Rome can be convincingly represented by synecdoche‚ÄĒa couple of voices speaking for the body politic. But literalizing ‚Äúthe people‚ÄĚ in movies proves more challenging. Fiennes‚Äôs worst idea may be to stage the referendum on Coriolanus as a Jerry Springer-like talk show, with an audience that literally jeers him out of the country.

Much has been made of Fiennes‚Äô updating of the play to the present (or at least a vague facsimile of it). The contemporizing seems more a budgetary move‚ÄĒan $8 million production can‚Äôt very well afford to reconstruct Ancient Rome‚ÄĒthan a cheap ploy to imbue the play with ripped-from-the-headlines resonance. Uneven though his choices might be, bringing the play up to our time and dressing it up in familiar visual idioms yields unexpected fruit. Barry Ackroyd, who shot The Hurt Locker, brings the same language of embedded wartime footage to its battle scenes. Harrowing images from the frontlines give substance to the warrior ethos for which Coriolanus stands‚ÄĒit makes the viewer see how combat experience can lead to the soldier‚Äôs exceptionalism. In those early war scenes, Coriolanus resembles the shade of Col. Kurtz; in his blustery antipopulist speeches, he echoes Aaron Sorkin‚Äôs Col. Jessup from A Few Good Men, all but barking that we want him on that wall.

The proudly martial mindset comes from an unlikely source. One of the most remarkable mothers in all of drama, Volumnia quivers with pride at the thought of military excellence. ‚ÄúOh yes, he‚Äôs wounded‚ÄĒthank God!‚ÄĚ she exclaims when she hears of Coriolanus‚Äôs return from the battlefield. Redgrave‚Äôs performance somehow deepens a mother-son portrait that could‚Äôve lapsed into simplistic psychosexual dysfunction. Foregrounding this relationship, the director plays to his strengths‚ÄĒthat is, his own performance and Redgrave‚Äôs.

Indeed, the movie is never surer of itself than when Fiennes commands the screen. The actor has clearly found something to admire in this odd creature‚ÄĒa patrician marauder‚ÄĒand his reverence tilts the drama‚Äôs politics in a direction that some might find problematic. The play has been famously malleable: Of a 1988 production by Joseph Papp at the Public Theater, The New Yorker complained that director Steven Berkoff ‚Äúsees nothing good in Coriolanus,‚ÄĚ amplifying the play‚Äôs populism. But a Com√©die-Fran√ßaise production between the wars was said to inflect the whole drama with the main character‚Äôs antipopulism, sparking riots and leading to the suspension of the performance. Meanwhile, Slavoj ŇĹiŇĺek has offered his own (unconvincing) reading, seeing Fiennes‚Äôs general as a proto-radical freedom fighter.

Shakespeare allegedly wrote the part of Coriolanus with an eye toward James I, who was known to dislike commoners. Fiennes preserves the qualities that would have flattered the king. As a leader, his Coriolanus has appeal: His inability to pander is precisely the quality we seek in our politicians, and his refusal to hear others orate about his achievements seems the genuine discomfort of the career soldier more at ease in the battlefield. By interpreting the warrior as a man of unshakeable if perverse principle, Fiennes can‚Äôt help but make Coriolanus a shining colossus among the hoi polloi.

And something more besides. ‚ÄúThere is another world elsewhere,‚ÄĚ he declares upon his banishment from Rome. It‚Äôs a plaintive proclamation‚ÄĒand it makes explicit what Fiennes‚Äôs electric performance implies: that inside every fascist beats a utopian heart.