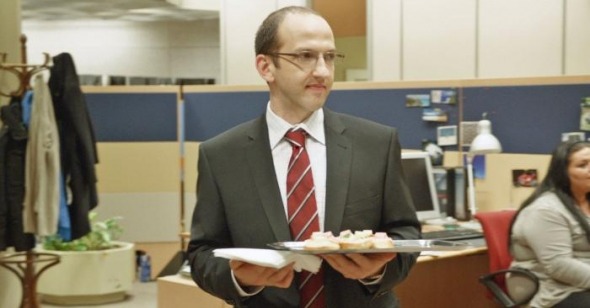 Behind Closed Doors
by Jeff Reichert

If you‚Äôve ever pondered the daily existence of a pedophilic predator who keeps his beatific ten-year-old sexual object locked in a special basement room‚ÄĒwhat he looks like, what he eats, what television he watches‚ÄĒMarkus Schleinzer‚Äôs Michael might just be the film for you. Across a series of locked-down compositions in which stillness and detachment stand in for insight and profundity, Schleinzer (befuddlingly touted for his time spent as Michael Haneke‚Äôs casting director, as if this were a clear signal of latent aesthetic prowess) unspools the tale of generic insurance man Michael (Michael Fuith, something like a waterlogged, Austrian Anthony Edwards) and the horrible secret he keeps in his otherwise drab home that is the heart of his otherwise drab life. We learn much about the imprisonment of young Wolfgang (David Rauchenberger), but we never find out exactly how he ended up in Michael‚Äôs basement; a box overstuffed with letters and drawings penned by the boy and never sent to his parents suggests his captivity has lasted for quite some time and has been sustained via a cruelly manipulative power dynamic.

There‚Äôs a dismaying expectedness to all of Schleinzer‚Äôs received art-film tactics, from the choice to rarely move his camera, to his decision to place the most horrific stuff in the space of his edits, to the Jeanne Dielman-humping narrative progression in which it becomes clear over time that the center of Michael‚Äôs carefully ordered universe cannot hold. And there‚Äôs a predictable irony to the finale, which finds Michael dead and buried, leaving his mother and brother to clean out his home and uncover his secret. (Or, potentially not‚ÄĒthe film‚Äôs final moments debase the work even further by introducing cheap suspense; will they find the boy at all? Is he alive or has he died?) Michael exists at the epicenter of a tradition that includes Haneke, but nothing Schleinzer offers here approaches his former employer‚Äôs bruising effects, even if he‚Äôs upped the shock-value ante by daring to probe the ultimate taboo. Haneke‚Äôs amongst the bluntest filmmakers working in the world of quality-assured European cofinanced filmmaking, but he at least understands the cinematic apparatus enough to occasionally burrow under the skin. Schleinzer, by keeping his camera, himself, and us at arm‚Äôs length throughout Michael effectively neuters his effort.

It‚Äôs worth diagramming a brief segment to make clear the film‚Äôs essential emptiness. One night, fairly early in the film, Michael enters the basement lair where Wolfgang is confined, and closes the door behind him. He‚Äôs already fed the boy, let him watch a little TV, and sent him to bed (these shades of uneasy domestic paternalism are nods towards a more complex relationship that might have been explored); the youth has likely been asleep for some time. After the door closes, the camera lingers for a beat on the unremarkable image. In the next shot, Michael‚Äôs in the bathroom, facing away from us, vigorously scrubbing clean his nether regions in the sink. Those of us who‚Äôve grown up inculcated into the language of visual storytelling infer the sexual abuse that has taken place. Those of us who‚Äôve not become immune to such hucksterism might even feel a twinge of revulsion. Can‚Äôt you see how Schleinzer has only intensified the grossness of the elided act, by leaving it to the mind‚Äôs eye and surrounding it with the utterly mundane? (Half a century after Nuremberg, does evil‚Äôs banality still hold the same power over the collective imagination, or should artists perhaps start reminding us again of the often extraordinariness of the horrific?)

In the space of an instant, Schleinzer has both congratulated his viewers for braving art about such terrible things, and rewarded them for their courage by keeping their noses clean. Michael might have been a better, more unnerving, and artistically successful work had Schleinzer deigned to acknowledge the taint of prurience that surrounds any purchased admission for his film. Instead of making us feel bad for being there, for choosing to witness these events as part of an evening‚Äôs entertainment, he only reinforces that we are, though perhaps superficially similar to his subject (we too have jobs and homes, hobbies, and families), finally superior, when it would seem his ultimate aim, though never to cull sympathy for Michael, is, at least to make him familiar.

About all that can be regarded positively in Michael is its radical sound design: there seems to be no room tone at all for Foleys to emerge from and dissolve into, and it accurately reproduces what life might be like if our heads were wrapped in cotton‚ÄĒthe film‚Äôs only truly discomfiting effect. Even if the clean, symmetrical compositions aren‚Äôt hard on the eyes (that the Austria-based Nikolaus Geyrhalter Filmproduktion is listed as the production company is somehow unsurprising), after a decade or more of cinematic order being deployed to mask disorders of every imaginable stripe, they feel bleached of meaning or import. Michael should have been a queasy-making time at the movies. It does stick in your craw, but for all the wrong reasons.