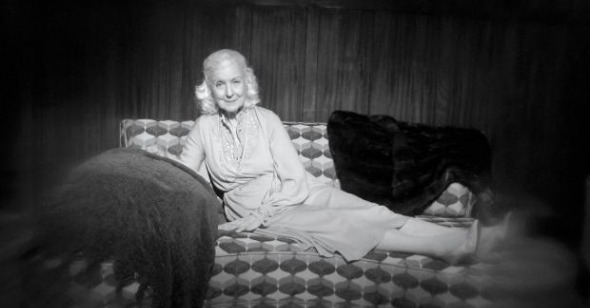 A Wink and a Smile
By Andrew Tracy

There‚Äôs a comforting ease (or laziness) to writing about a new Guy Maddin, regardless of one‚Äôs ultimate opinion of the film itself. Maddin is one of those rare filmmakers who neither progresses nor retreats, neither stultifies nor excites. His intricately Lilliputian creativity, his faux-naivet√©, and his not-quite smugness operate blissfully free of the relevant or the revelatory, at the comfortable junction of hobbyism and careerism. Kino Delirium, indeed‚Äîas with all Maddin (excluding, perhaps, the blessedly brief and rather exhilarating The Heart of the World), all declarations of extremity are cozily couched in quotation marks. Is the enthusiastic embrace of each new offering at least partially due to the fact that one need never risk being moved? Maddin might be or might have been a wild man in his much publicized (not least by himself) private life, but any grand passion in his films is pitched solely in the key of twee. Maddin‚Äôs cannibalized, half-imaginary evocations of the cinematic past‚Äîshreds of German Expressionism, film noir, and Soviet proletkult wrapped up with the arcana of the Canadian flatlands‚Äîrenders his films blessedly harmless; indeed, their preciousness is their armor. What rough soul would fain skewer such an innocuous bauble?

What to say, then, of My Winnipeg? The same‚Äîperhaps a little more so? Certainly a higher degree of dependably mild amusement (can mildness be heightened?) and a greater volume of genuine, unforced laughs. As Maddin‚Äôs filmmaking is essentially a compilation of eccentric conceits, it‚Äôs appropriate that this, his most sustainably amusing effort thus far (excluding the typical lull around the 50-minute mark), adopts an agreeably loose collage form of semi-autobiographical fantasia and real and apocryphal hometown lore. An ancient by-law dictating that the city‚Äôs multitudinous somnambulists, who unconsciously wander back to the homes they once occupied, must be welcomed into those houses by the present occupants and allowed to dwell there until they wake; blood rites enacted within City Hall; a dizzying network of laneways forming a byzantine map of the city‚Äôs backyard secrets; the death of the city‚Äôs beloved hockey arena, and the end of hockey as a distinctively working-class sport, with the arrival of the NHL. Et cetera. Freed of any necessity to hold our attention beyond their first chuckle-inducing appearance, Maddin‚Äôs little delights come fast and furious, spun around the thin narrative of his attempted reconciliation with his mother‚Äîplayed by an excavated Ann Savage of Detour infamy, who is significantly less amusing (or sentient) than the late Ann Miller when Lynch unearthed her for Mulholland Drive.

As always, though, the actual effect of such filmic archaeology is less important than the fact that Maddin has done it in the first place. The psychosexual maternal drama takes an inevitable backseat to the display of Maddin‚Äôs latest figurine, a genuine film relic to complement the fabricated ones he‚Äôs devoted himself to. Nostalgia, personal and cultural, is obviously the driving force of Maddin‚Äôs fragile little dream world, and perhaps as well fosters a link between his (apparently) exclusively heterosexual proclivities and the distinctly gay aesthetic and sensibility his films so patently evince. Where the collector, that avatar of stunted heterosexual maleness, appropriates the past through cross-indexing and incessant referencing, the Warhol/Anger/Jack Smith heritage from which Maddin less obviously poaches appropriates it as performance and pose, irony as vehicle of self-actualization. Maddin‚Äôs modus operandi, here as before, is to fold the serious irony of the latter into the cheap irony of the former‚Äîto sap it of its subversive thrust and display it with a knowing wink. Homosexual aestheticism and thematics are simply further decoration for the miniature stage of Maddin‚Äôs Kino Diorama. For all the polymorphous perversion on display throughout his films, there is little about the Maddin oeuvre that genuinely touches upon the erotic. The repeated dips into sexual ambiguity, from the wholly unambiguously titled Sissy Boy Slap Party to My Winnipeg‚Äôs evocation of a childhood spent between the perfume-laden air of a beauty shop and the reek of hockey arena locker rooms, is merely a sterile pantomime enacted by a dilettantish hobbyist, another stylistic trait to be filched from a half-imagined cinema past. Maddin‚Äôs increasing foregrounding of ‚Äúhimself‚Äù in his films‚Äîfrom the protagonists ‚ÄúGuy Maddin‚Äù in Cowards Bend the Knee and Brand upon the Brain! to the use of his own endearingly inadequate voice as My Winnipeg‚Äôs narrator‚Äîbrings collector and performer neatly together. Writing gay-inflected psychosexual confusion large, Maddin makes it simply another trope to be paraded out, another ingredient in his radically ahistorical m√©lange of styles and sensibilities past.

Apologies for what may seem like undue harshness towards a wholly inoffensive figure, but so little of the writing on Maddin attempts to move beyond a bemused mixture of condescension and affection, or simple capsule description of his films‚Äô respective little conceits. Yet no aggravated efforts of either elevation or condemnation are warranted here. Maddin needs no ‚Äúputting in his place‚Äù because he has firmly and willingly lodged himself there. His oeuvre, such as it is, presents one of those welcome instances for a critic where personal taste (or tolerance) need not take account of, or surreptitiously skew, aesthetic evaluation. Maddin‚Äôs is a boutique cinema, frilly and clever enough to be momentarily diverting and content to be set aside when amusement begins to dwindle. His affected precociousness and cultivated quaintness is blessedly (almost) free of self-satisfaction or self-aggrandizement. His unimportance is a guilt-free matter for maker and viewer both: with neither seeking it, not finding it is satisfaction in itself.