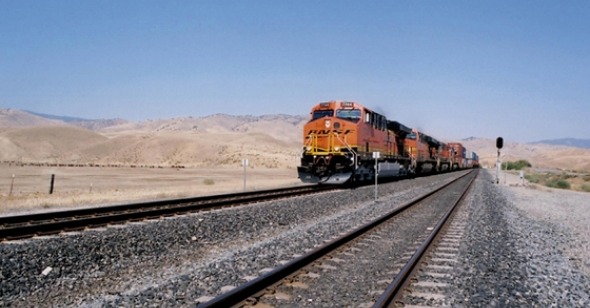 Running on Time
by Andrew Chan

Moments of transcendence are rare in cinema, but when they do come along, you‚Äôre left trailing after the filmmaker hoping he can offer more of the same. My first and only prior encounter with the work of James Benning was 2004‚Äôs 13 Lakes, and while its screening at Anthology Film Archives last year stands as one of the most overwhelming aesthetic experiences I‚Äôve had in recent memory, I wondered what more could surprise me about a style that seemed chained down by its own rigidity. If Benning‚Äôs latest, RR, reveals the unexpected range of variations that so-called ‚Äústructural‚ÄĚ cinema can accommodate, it also, at least initially, amounted to a mild disappointment. Where much of the pleasure of watching 13 Lakes stemmed from the film‚Äôs lean, mathematical organization‚ÄĒits commitment to ten-minute shot lengths, a pre-announced number of shots, and uniform half-sky/half-water compositions‚ÄĒRR is avid in its portraiture of trains passing through American landscapes, and racks up a total of 43 chapters in its nearly two-hour length. The result at first feels excessive, mainly because the film never aims to duplicate its predecessor‚Äôs distilled form.

RR replaces 13 Lakes‚Äô elegiac stateliness with a folksy, all-American taste for forward motion. This tonal shift is achieved by moving our attention away from the philosophy behind Benning‚Äôs structural choices, and relocating it in the rhythms and movements plainly laid out onscreen. Part of what made 13 Lakes spellbinding was the audience‚Äôs anticipation of its single repeated editing device: cuts to black which yanked us away from its sublime images back into the mechanical world of film, and which carried with them haunting implications about our separateness from nature and the potential impermanence of the physical world. In RR, the significance of editing is diminished, since the duration of a sequence is determined by how long it takes for a train to enter and exit the frame. Each shot begins with the single-minded narrative purpose of recording one train coming in and out of the camera‚Äôs view; once that purpose has been served, the film moves on. Playing against this goal-oriented structure is the suggestion of vast, mysterious off-screen spaces, which gives RR an expansiveness that was absent in 13 Lakes‚Äô greatest-hits album of landscapes. Where the earlier film created tension by controlling and manipulating our expectations of cinematic time, RR‚Äôs concerns are primarily spatial, as each shot leaves behind it a trail of questions about what lies to the left and right of the frame, and what happens in the world that has been cropped out.

One of the most entrancing features of a Benning film is the seeming invisibility of the auteur‚Äôs own hand‚ÄĒa quality that is hard to come by in work this highly controlled, and in an avant-garde culture that puts such a premium on bold individuality. While the authorial presence is always there, softly voicing itself behind the framing and editing, Benning‚Äôs gaze is so close to our everyday vision that it seems unanchored to an artist‚Äôs personalized, patented ‚ÄúI.‚ÄĚ In the pleasant but unglamorous textures of 16mm (a format that Benning will reportedly be abandoning in the future), dry, weedy fields and beautiful snow-covered vistas add up to the same aesthetic value, and Benning rejects the visual manipulations of current cinema that would assert his directorial agency over the images. Yet RR is purposeful in its emotional effects. Benning‚Äôs spare methods automatically connect it to the primal energies of the art form, so it seems right to consider RR as playing into age-old dichotomies, especially the two traditional notions of the screen as a realm of spectacle and of meditation. The film carries with it a history of symbolic and dramatic associations that have attached themselves to trains in films, among the most obvious instances being the Lumi√®re Brothers‚Äô Arrival of a Train at La Ciotat, which in 1895 elicited a famously panicked reaction that highlighted the new medium‚Äôs sensationalistic capacities, and the films of Ozu, where the passing of a locomotive often serves as a contemplative image. In Benning‚Äôs work, the feelings of aesthetic awe and intellectual or spiritual reflection are conjoined; as we labor along with him to peel back the layers of cinema, we access some of the thrill early audiences once felt about the basic ontological, existential fact of the medium.

But while both 13 Lakes and RR have inspired in me the kind of concentrated, theoretical thought about the properties of film that I don‚Äôt usually engage in, RR reminds me of qualities I have valued more in great American poetry than in great American cinema. In its careful accretion of physical detail, it has a cumulative effect similar to that of certain poems by Elizabeth Bishop. What has been said time and again about her work‚ÄĒhow description acts in place of narrative; how a stage is set on which neither the drama nor the players appear‚ÄĒcould also be said for Benning‚Äôs films. As in Bishop, there is a sense of the entire look and feel of a location being preserved, and of psychological states being evoked through details that do not neatly correlate with prefabricated meanings. In a style that could not be any less florid, even the filming of freight trains instead of passenger trains seems full of implications, suggesting the filmmaker‚Äôs wariness of the romance and nostalgia that human figures in transit might invoke. Only a few odd texts‚ÄĒa city name, a company logo‚ÄĒtoll us back to a recognition of the social reality surrounding what we see onscreen. While this doesn‚Äôt mean that the politically outspoken Benning ignores the complexities of society, it does reveal that the principal beauty of his films, as in Bishop, lies in his fascination with the surfaces and depths of the physical world, independent of the human ability to confer value upon them.

Nevertheless, the audience plays an active role in the film‚Äôs emotional effects. As train after train enters and leaves the film, the viewer‚Äôs narrative-seeking mind is liable to interpret them as a cast of characters: lonely machines traversing the country, forced to carry out the orders of human society. Particularly in the shots where a train is seen moving through an inhabited area, the audience is set to imagining RR as a collection of establishing shots cut out from a variety of narrative films, as oases of calm observation in the midst of dramas hidden from our view. At one point, we watch a car waiting to cross the railroad tracks, and are reminded of the throwaway nature of these moments Benning has assembled. While these images of trains clearly evoke the pragmatic, economic dimensions of the world, they are also images that our practicality would encourage us to disregard in our daily lives.

The most unexpected question I hit upon when watching RR was whether or not a Benning film could be funny. RR encourages mental tangents of this sort in a way that 13 Lakes didn‚Äôt, mainly because it is less interested in tapping into the ecstatic and sublime. Touches of politically charged humor emerge here and there in the soundtrack, which includes snippets of ‚ÄúThis Land Is Your Land‚ÄĚ and ‚ÄúFuck tha Police,‚ÄĚ but there is the jarring sense that they have been imposed on the film rather than having arisen naturally from the diegetic world. There are also points at which a visual surprise‚ÄĒsuch as the image of a cat graffitied on the side of a train‚ÄĒgets a few laughs. But if there is a profound comic core in RR, it lies in the way Benning exposes one of the most deep-rooted of human illusions. Even as he illuminates moments we are likely to pass over in everyday life, Benning recreates our blind spots with all that he leaves out, and draws attention to the ‚Äúmadeness,‚ÄĚ the ‚Äúthingness,‚ÄĚ of what we often take for granted as givens on Earth. The film recognizes irony in the way we invent machines and impose systems on the world, and then somehow divorce them from ourselves‚ÄĒas if what we have made had the inevitability of nature. Benning‚Äôs approach may seem to focus on the surface materiality of things, but he also makes us aware of our failure to see deeper into a thing, our inability to know an object‚Äôs complicated history and social role within the first moments of our looking at it. Could it be that RR transcends the expectations attached to its genre, and becomes a subtle farce about the flaws of human perception?