The Order of Myths 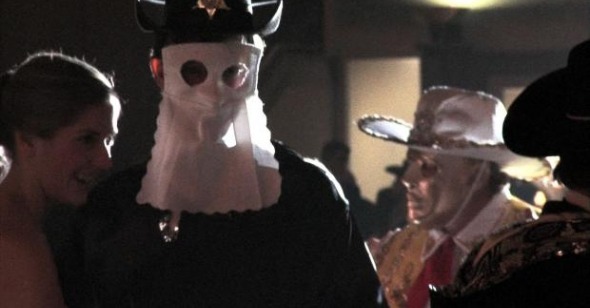 Conventional wisdom among film industry pundits currently suggests that documentary is dead. The subtext of that death is not that fewer documentaries are being made (there are more than ever), or that they’ve stopped evolving aesthetically (though given the rampant sameness hobbling most contemporary docs this is certainly an issue), but simply that they’ve ceased producing viable returns for distribution companies at the box office. Theatrically, docs have long been odd ducks, and the sharp ascendance of that storied class of 2003—which saw Capturing the Friedmans, Spellbound, and Winged Migration (none, it should be noted, are necessarily great films) ride the post–Bowling for Columbine Oscar wave to multiple millions at the box office, thus launching the documentary “boom”—was a far more unexpected happening than the great ’07 bust, which saw only two documentaries not directed by Michael Moore (No End in Sight and In the Shadow of the Moon) eke their way past a million dollars in the U.S. (Sicko crossed $24 million for those counting) providing a ready carcass for circling buzzards on deadline to pick over. While there may be some value in assessing the quality of a cinematic work based on the preference of the masses (i.e., this is the thing that everyone cared about so it must have been important at that time), slavishly enslaving oneself to the same results in the degradation of culture that’s seen a recent apotheosis in the instant enshrinement of fanboy fare like The Dark Knight as art. The “docs are dead” mantra, which springs from this generally facile game of numeric analysis, is perhaps most harmful in the way it compresses the varied modes of documentary practice into yet another genre to be compared and contrasted alongside “blockbusters,” “foreign films,” and “romantic comedies”; it makes it easier for audiences to forget the unlimited richness of documentary.

The pundits hurt, but the filmmakers themselves have hurt matters worse. Somehow this more rarified mode of filmmaking has, thanks to the combined influence of technological availability and the lower aesthetic standards most audiences seem to ascribe to the form (tired ethical questions left over from the Direct Cinema moment don’t help either), as a ready entry point for the budding unserious filmmaker angling for the big Hollywood payout. We have this unhappy confluence to thank for the glut of cinematic numbskullery out there masquerading as real documentary. Too many, with not much to say, and increasingly less diversity in the modes of telling—why would people go to docs when the recipe so often boils down to little more than: Hot Button Issue + Sketchy “Cultural Impact” of Said Issue + How Issue Affects My Family, Man + Gotcha! Exposé Moment – Attempts at Aesthetic Unity = Film. Thank goodness then for the bracing eye and refreshing candor of Margaret Brown’s The Order of Myths, which purports to do nothing more than document the ongoing oddities of Mobile, Alabama’s Mardi Gras festivities, but ends up subtly and cleanly unpacking our country’s uneasy history of racial tension.

In 2007, Brown, responsible for the lilting, if insubstantial Townes Van Zandt doc Be Here to Love Me, and a terrifically meta video for Okkervil River’s “Our Life Is Not a Movie or Maybe” went back to her hometown of Mobile, the birthplace of Mardi Gras in this country, to document the festivities. Carnival in Mobile is a special animal: sixty-seven years ago, black members of the community, tired of exclusion by the white “Mystic” societies from a central place in the celebration, established their own parallel Mardi Gras, with similar events, a separate royal court and different parade route. Brown’s film builds itself off of interviews with the “royalty” chosen by both the Mobile Area Carnival Association (MACA—the white organization) and Mobile Area Mardi Gras Association (MAMGA—the black group) and supporting figures coupled with nicely lensed verité footage of the preparations and festival itself. The elements are simple, but the cumulative effect of her editorial inclusions and juxtapositions is overwhelming.

Throughout The Order of Myths, Brown refuses to drop the heavy hand that mars so many documentaries purporting to tackle “big issues.” An event in which the white debutantes are escorted by masked men, for all the world looking like erstwhile Klansmen, is allowed to play out underneath talk of tradition and roots instead of facile, ironic underlining of the inherent contradictions. The commentary would have been superfluous—Brown has already established Mobile as home to one of the nation’s last lynchings and thus an uneasy racial balance, even though some of her subjects claim otherwise. There’s an obvious disparity between the two festivals, and Brown’s cutting does a nice job of bearing witness to the economic inequality undergirding the preparations without tipping her hand, striking a nice equilibrium between critiquing recalcitrance and understanding the positive elements of ingrained tradition that often go ignored. Aside from a mid-film cut from the rowdy pre-festivities of the MAMGA to a more stiffly genteel cocktail event hosted by MACA which plays off too-easy caricature, Brown doesn’t make efforts to convince us that this segregation is bad, just that it is, for better and for worse.

She doesn’t shy away from real heartbreak though: witnessing Pat, the black designer of MAMGA Queen Stefannie’s train, gush with pride after her MACA counterpart, Ron, lightly praises (i.e. nearly dismisses) her design—“When Ron tells you you’re the bomb, then all your hard work is worth it!”—bespeaks of a terrible insecurity that one can’t help but imagine extends to the larger community. Brown returns throughout the film to two elderly, white mystics in full regalia who discuss the “good blacks”—the well-educated doctors, lawyers, and the like—and how this new grouping of upwardly mobile African Americans has made their own festival to rival the MACA events, yet, immediately after, Brown cuts to a discussion among Stefannie (a schoolteacher) and her family in which they bemoan the financial resources required to prepare a Queen for her coronation. No such discussion happens amongst the family of MACA Queen Helen Meaher, the quintessence of Southern gentry. Learning later in the film that Helen’s ancestors brought back the last load of slaves, taken from Africa to the New World illegally in 1859, and that this cargo most likely included Stefannie’s ancestors, is the kind of startling reveal sorely lacking in recent documentary. But even more melancholy is a quick shot in which Brown’s camera catches a crossroads in Mobile’s “Africatown”—the intersection of Timothy and Meaher streets. Timothy Meaher being, of course, the leader of that last fateful slave voyage. In a single image the dark history behind the everyday is quietly exhumed.

The list goes on—it’s worth noting that Brown takes time to cover the Conde Explorers Mystic Society, the only interracial group in Mobile (it currently has one white member), as well as the ceremony in which the city’s mayor, Samuel L. Jones, closes down city hall in deference to the white King Felix III. One wonders what Jones, the first African American to hold the office in Mobile, feels about abdicating his power, even if ceremonially, amidst an exclusively white group. Throughout the film, both sides attest to how little need there is for the city to change its ways. Again, Brown isn’t judgmental on this score—she presents the effects of behaviors and patterns and asks us to draw our own conclusions. Traditionalists might label this the mark of the “true” documentarian, but I’d prefer to call it essential for only a particular strain of documentary filmmaking. One that The Order of Myths rests only uneasily within. After all, Brown refuses to efface herself entirely—revealing near the end of the film that one particularly wizened white mystic is her own grandfather discloses her own implication in this cultural order. And by returning to him after the film’s “end” for a quick shot in which he offers to share something that she can’t record before cutting out to the credits, some of the playful metacinematic strands of “Life Is Not a Movie or Maybe” creep in.

Arguments about the relative “purity” of documentary aren’t particularly interesting these days (did we really need that recent Errol Morris New York Times editorial on the use value of recreations over two decades on from The Thin Blue Line?)—just because something shown in a documentary context isn’t “real” doesn’t mean it’s not “true.” (Debating those categories is better left to another article, another film.) Brown’s lucky in that the 2007 Carnival offers her a moment both “real” and “true”: The night after the MAMGA King and Queen make a historic first appearance at the MACA coronation (a coup all it’s own), Queen Helen and King Felix return the favor and stop by the MAMGA-hosted Comrades Ball. As the four royals dance together both on-stage and amidst the crowd, we witness a subtle, powerful shift in the dynamic of an entire city. If this is the kind of thing one demands of the documentary experience, then Brown delivers in spades. Instead of grungy nihilistic blockbusters that only exist to ratify their audiences’ expectations and negative worldviews, here we have something fresh, something idyllic, something that suggests societal evolution. Will The Order of Myths gross a dime at the box office? Not sure. But with Margaret Brown’s movie in theaters it’s hard to argue documentary is moribund. It’s pullquote season, so I’ll throw one more on the pile: “The Order of Myths is the best documentary in ages, and one of the best films of the year!”