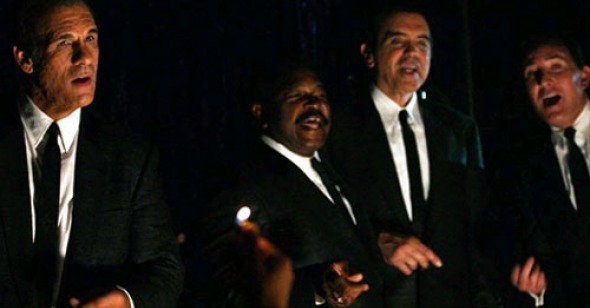 Ad and Subtract
By Leah Churner

There’s no joy in high-hatting the unpretentious, so here’s an affectionate preamble: Robert Davi is an endearing nonconformist, a sore-thumb governed by schizophrenic logic, a Catholic Republican character-actor who, by virtue of his cratered complexion, has found steady employment in Hollywood playing craggy cops and evil foreigners since the mid-seventies. Lord love him, he’s been busy this autumn, doing voice-overs for McCain ads from the bowels of Beverly Hills, narrating video montages for the RNC, and hamming it up in theaters as a Muslim recruiter of suicide bombers in An American Carol. However disagreeable his politics, it’s hard to deride such a misfit. Here is a man for whom Showgirls was a day job, and campaigning to end abortion in California is a hobby. So it should come as no surprise that this free man’s spastic magnum opus (which he co-wrote, produced, and directed) is a bit uneven.

The premise of The Dukes is solid: the members of a doo-wop group, successful in the Sixties, are now loosely associated as losers, struggling to make alimony payments and working as line cooks in somebody's aunt’s restaurant. Consumed as they are with Italian food and crooning, it's no surprise that they find their solution via matters of the mouth: after one of them swallows a gold tooth, the band hatches a plan to burgle a dental clinic. They'll find gold there, and subsidize their own nightclub.

The first scene condenses enough cinematic groping for a whole feature into about three minutes, what with the gyrating camera, the pawing cleverness of the dialogue, the mood music from the oldies station, the lights turned way down low. Davi and his friends sit at a restaurant, poring over classified ads in the newspaper, and the conversation turns to the “kitchen bandit,” who has lately been robbing Los Angeles restaurants in a Zorro mask. They begin an argument about where this news item would be found, in the restaurant section or the local. There's a healthy dose of character establishment for each member of the crew: Elya Baskin, a nervous Russian in denial about his pot problem, is razzed for getting fired from his job as an airline electrician for stoner behavior on the tarmac; Chazz Palminteri makes eyes with a hefty woman from a neighboring table, and an old lady in a motorized wheelchair runs over the type-two-diabetic Frank D'Amico’s foot, necessitating a trip to the emergency room. It’s a delightful playlet, with ninety minutes of baggage tacked on its tail.

A familiar HBO aesthetic dominates—it’s melding of The Sopranos' guido malapropisms and chiaroscuro set pieces with the fish-on-the-wrong-coast comedy of Curb Your Enthusiasm. Unfortunately the black humor is spoiled by Davi’s insistence on registering vulnerability, pummeling us with the redemptive power of parenting. Palminteri (who looks like a middle-aged Eddie Munster) undercuts Davi’s credibility with the glee of his chubby-chasing bachelorhood, and has much more of a knack for comedy. (Davi’s lines often come out like the gilded-corndog promotional slogans of Brooklyn Borough President Marty Markowitz.)

The Dukes commences with such promise, and then it culminates with Robert Davi mouthing something reminiscent of Billy Joel’s 1984 single “The Longest Time.” Putting aside the heist sequence, in fact, The Dukes starts to look like a feature-length extrapolation on the music video for that neo-doo-wop song. Therein, a downtrodden and punch-drunk Joel, smoking alone in an empty high school gym after a class reunion, is whisked into an a cappella rendezvous when his best friends pour down a stairway and commence dancing on tabletops. The suited, middle-aged men jive and harmonize through the school, visiting the music room and the boys’ bathroom, and meeting a gang of their former, “Fifties” selves on the stairs (distinguished by jean jackets, sunglasses and fuller heads of hair). The Dukes takes the ingredients of this sugary formula, pulling and stretching it like Jersey taffy—and here is where the real trouble begins—around a series of product placement opportunities offered to the guys.

What initially looked like reckless abandon just starts to look like plain recklessness, as
Davi and company permit themselves to indulge in rampant advertising. This isn't a rambling, leisurely plot; it's a roster of sponsors acknowledged in alphabetical order. The meta-joke is that the sad-sack “look what we do for money!” sequences are nonfiction. When the guys do a 60-second TV spot for a party-rental green-screen karaoke system, we see the actual toll-free phone number for Dance Heads, Inc. When Davi points out, “You know, the best ones are those da Vinci Veneers. They give you the movie star smile,” it’s pure payola. (Visit the Da Vinci Studios website and watch the trailer for The Dukes!)

By the time they’re dressed up in tomato costumes singing about Guiltless Gourmet salsa, it’s clear that they aren’t acting. Can the narrative accommodate a Home Depot montage? You bet! And let’s get a shot of that Patron billboard. The boys’ll celebrate with shots of delicious Patron Brand Tequila in the next scene. With all due respect to Robert Davi, what kind of usurped vanity project is this? There is no winking, no irony, no postmodern breaking of character: take it all, goopy nostalgia included, as genuine. By the time Davi serenades his longhaired son, The Dukes feels like an episode of Happy Days, commercial breaks included.