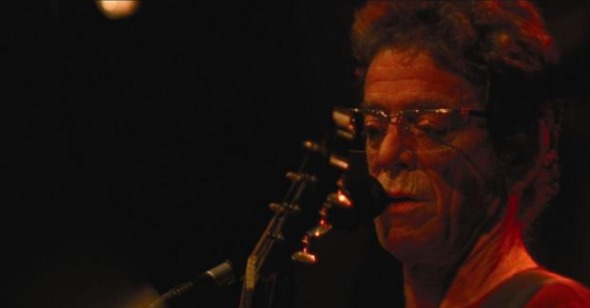 At what point do bands decide to stop playing their own music and start simply covering their old material?

Sooner than they used to, it seems. Since 2005, the alternative, sponsor-free music festival All Tomorrow's Parties (named, if you have to ask, after a Velvet Underground song) has been featuring seminal bands covering their (allegedly) most seminal albums in their entirety. This summer, in Chicago and Monticello, NY, no fewer than eight artists will take the coyly named "Don't Look Back" stage to sample old material of varying vintage (Thurston's thirteen-year-old Psychic Hearts and some twenty-year-old Public Enemy among them). It's a shrewd idea, and this humble critic, for one, has more pressing interests than Built to Spill's new material. But such shows, as gently as they stroke one's nostalgia, nonetheless carry that faint air of a premature postmortem. Like a reunion show for a band that hasn't broken up yet, they conveniently elide the artists' new work and head straight for the collection of songs that most people would rather hear anyway. Of course, this is not all bad: as celebrations of all yesterday's parties, they're undeniable, even as aging critics and record-store mavens rue the death of The Album as Art Form. In the best cases, they may even help to solidify the legacies of those aging, but still active bands for younger audiences who have unaccountably planned their dosage of herbal ecstasy around Vampire Weekend.

Lou Reed is not an artist who needs much legacy building, although throughout his career he has often required a bit of reputation rehab. Since his epochal 1989 spleen, New York, Reed has released a live album, a couple of retrospectives, a meditation soundscape, and a handful of good, but largely ignored albums, at least one of which (The Raven) drew much head-scratching and derision. But regardless of any recent output, he remains to many something like New York's poet laureate (if not a minor deity), a fact that obscures the history of Reed as a "troubled artist," one who, with every other record, nearly ended his career, if not his life. In 2006, Reed looked back—in anger, disgust, and heartbreak— at one of these “other records,” Berlin, revisiting it with a 35-piece band, unexpected precision, and Julian Schnabel as set-designer and documentarian.

Following his endearingly bitchy, glam-rock cocktail Transformer by a year, Reed's third solo album is grim, tender, icy, and even—I dare say—a mite socially conscious. A critical disaster (Rolling Stone's review ended, "Goodbye, Lou"), it remains one of the many grand fuck-yous of Reed's career, a work of serious, even perverse introspection that's absurdly overblown in every way. It's purportedly a song cycle, but as Robert Christgau points out, "the story is lousy," not much more than a loose collection of emotional episodes involving what might, even by that point, have been deemed "the usual": spoiled brats, junkies, sex both casual and occupational, jealousy, domestic violence, suicide, and shitty friends. But what distinguishes Berlin ever so slightly from Reed's earlier efforts is his bitter contrarianism, which, while ever-present in Reed, was easily swallowed with the milk and honey of David Bowie's pop-production. Here, it's by turns mournful and rabid, voicing a savage resentment of the effete upper classes—men of good fortune and slick little girls, alike—and probing the abject limits of an underground, oversexed lifestyle he had formerly, if offhandedly celebrated. The irony of Reed's early solo career is that although his sleaze-hungry listeners liked the idea of taking a walk on the wild side—a province that Reed himself was always a little sarcastic about—they weren't prepared to face the natural consequences: disease, degradation, and death. And following the fall of Berlin, neither was Lou, who then released the now-unlistenable live album, Rock & Roll Animal, which reduces Reed to the camp cliché he had just tried to kill off.

Thirty-plus years later, introducing Reed's performance of his album maudit in St. Ann's Warehouse in Dumbo, Schnabel is able to proclaim Berlin a masterwork, even confessing that it is the soundtrack of his life. Given the album's subject matter, this disclosure would be alarming if it weren't also coded in the mythology of the last 30 years of downtown New York City. This is Reed and Schnabel's shared milieu of art and excess, and a natural, perhaps irresistible setting for a filmmaker who likes to position himself in the worlds of other artists, like Gary Oldman opposite Jeffrey Wright's Basquiat or inside the left eyeball of Jean-Do Bauby. Schnabel's meaty presence is only briefly felt (saluting Reed's mother in the audience and then disappearing amid some typically Schnabellian archival footage of rushing water), but his set design, onstage projections, and postproduction add a good deal of visual noise to Reed & company's aural variety, which reproduces the album with a mixture of professional exactitude and unpredictable cacophony.

As a concert film, Lou Reed's Berlin is a little closer to The Song Remains the Same than The Last Waltz, engaging in digressions and hallucinations of the album's protagonists, Caroline and Jim, as much as in the band's sometimes thunderous, sometimes chilling performance. Schnabel's set design, which matches the scale and collage-heavy aesthetic of his canvases, reconstructs "the hotel that she called home" as a greenish-walled, 3-D palimpsest of japonoiserie, paisleys, torn wallpaper, and broken furniture wherein Caroline, Jim, and company shoot up, make out, and dissipate variously. On top of all this—occasionally even on top of Reed, and interpolated throughout—are newly shot dramatic sequences starring Emmanuelle Seignier as Caroline, and credited to Schnabel's daughter, Lola. The irony here is pungent, especially when Reed sings of those "men of poor beginnings" who "have no rich daddy to fall back on." But while this bit of nepotism (and the press notes' revelation that Lola is a junior at Cooper Union) will be cause enough for many to dismiss her contribution, this is partly a work about parents and children, and Lola's work here still very much of a piece with her father's. More importantly, it fits with the retrospective angst of the entire project, conjuring Reed's own ersatz evocations of Brecht/Weill villainy in a canny succession of styles from New York's avant-garde cinema. Most obviously, the frontal projection is something Reed himself would be used to from Warhol's 1966 Exploding Plastic Inevitable (and perhaps from his theatrical work with Robert Wilson). But in terms of content, Jack Smith is the key referent: a sequence features Caroline, tarted up in Mary Queen of Scots drag with chintzy dollar-sign earrings, shot in a desiccated, colorless film stock that adds to the appropriately phony sense of a lost paradise. These sequences are occasionally too literal—with the black Air Force sergeant's hand caressing Caroline's face and the Welshman from India jogging through the frame in time for Reed's mention of him—but they are mostly integrated into the plasticity of Schnabel's frame, if not overwhelmed by the force of the music.

And in many ways, Reed's 2008 iteration of his song cycle bests his original. Complete with original lead guitarist Steve Hunter, children's choir, string section, horn section, and Antony of Antony & the Johnsons (who later sings an utterly devastating version of "Candy Says"), the band Reed has assembled makes coherent the now rather dated Seventies excesses of the original (which featured Jack Bruce and Steve Winwood). But more crucial is Reed's own persona, no longer that of a sneering, whispery hipster, but of an aged, embittered, and cautionary pater familias. Listening to Berlin in its original form, one is hard-pressed to separate Lou from the jealous Eurotrash junkie Jim, dispassionately speak-singing the words "sad song" and coldly declaring, after his paramour's suicide, that "somebody else would have broken both of her arms." But here, Reed is able to morph into all different characters at will, gamely impersonating the kvetching neighbors in "The Kids" ("the black Air Force sergeant was not the first one!"), lividly "looking through the eyes of hate" upon Caroline and her mirthless hangers-on, and voicing her helpless objections to her lover's beatings with what seem almost like genuine tears.

The sheer range of Reed's delivery, particularly after a career of indifferent and disdainful poses, is surprising in its breadth, suggesting a distance and perspective on the events of Berlin that was a good deal harder to read in 1973. Here, it comes off credibly as the dour musings of a "quiet man," weary of the wasted, profligate lifestyle of "Lady Day," who is compelled to insanity by the ineluctable forces of music, bars, drugs, and screwing. What once prompted music critics and glam-rock fans to question the artist's sanity now reads as the sage commentary of an outsider, one who has lived through such things, taken such pills, endured such humiliation and pain, and can now, in earnest, stop wasting his time with them--unless to muse over their ashes. Even now, it serves as an unusual and useful corrective to the dreary romance of the New York streets, which each successive generation has sought to live out (or die trying) in clubs and gutters downtown. And it suggests that, by revisiting an old album, especially one as wayward as Berlin, an artist like Reed can do more than feed his fanbase's nostalgia. He can redecorate the mythologies of New York and of his career with a wiser, more serious, and more tender fuck you.