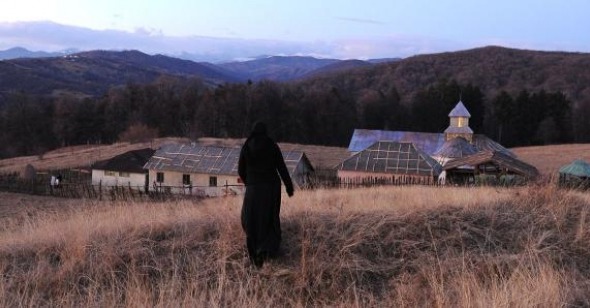 In staunch opposition to character-driven cinema’s tried-and-true narrative of personal advancement, the epic-length Romanian Beyond the Hills tracks its main characters as they dig their heels in deeper and deeper—and only continue to do so throughout. Writer-director Cristian Mungiu presents us with both sides of a dilemma, and then with mounting evidence that it will be irresolvable. He has, in effect, made an austere realist suspense film, not unlike his celebrated previous feature, 4 Months, 3 Weeks and 2 Days.

Two young women, each stubborn in her own way, reach an impasse in their relationship at the remote Eastern Orthodox convent where one of them now lives. Visiting Alina (Cristina Flutur, using her sharp features to maximum effect, including a long mouth that’s loath to smile) has traveled from Germany to stay with Voichita (Cosmina Stratan, often seemingly transfixed on an indeterminate horizon point), whom Alina took under her wing at the orphanage where they both grew up. The contrasts sustained by Mungiu—the spartan candlelit interiors of the convent and the barren but precipitous surrounding landscape, the white of the snow and the black of the nuns’ attire—give the story the sense of snuffed-out grandeur.

It quickly becomes clear that the two had been lovers, making the cloistered setting all the more inhospitable, particularly to the guest, who’s hell-bent on picking up where they left off. (Emotionally precise, Stratan and Flutur, who shared the best actress prize at Cannes, also do remarkable physical work here, suggesting their former intimacy both in the odd moment of recovered tenderness and in their tentative navigation around each other, all the while keeping their past together something of a mystery.) Alina is under the impression that they’ve agreed to return to Germany together to work; Voichita betrays a reluctance to leave the convent, in large part because she’s deferred much of her decision-making to the rigid presiding priest (Valeriu Andriuta), who disapproves of her going abroad. Voichita’s placid invocations of God’s plan thus spur her friend’s alternating attempts to wrest back her loyalty from Him and prove that she’s capable of matching Voichita in the endurance test of devotional procedure (praying, confessing, fasting, etc.).

From the outset, though, none of Alina’s gestures seem to elicit the desired response. Upon her arrival, she comes bearing a small electric candle as a gift; Voichita informs her that she can’t use it as the convent has no electricity, but that she’ll accept it all the same. Alina’s increasingly rash acts—the nuns tie her up and take her to the hospital after a delirious fit of rage; she eventually destroys church property—begin to scan as plain blasphemies to the convent’s Father and Mother. It is only after a significant chunk of running time that we begin to fully understand where she’s coming from. The motivation, as it were, for Alina’s aggressiveness emerges with tragic clarity as she’s made to leave the convent grounds on account of her behavior, and summarily returns to the home of her foster family. There she finds the contents of her room boxed up and realizes another girl has been living there—at which point she resolves to return from whence she came. It is out of absolute desperation, then, that Alina fights to preserve what must be the only love she’s ever had. Mungiu manages a similar late-game humanizing of the priest (the viewer might well have already written him off as a simple stand-in for a forbidding institution). The seemingly cold Father’s continued (if reluctant) willingness to take Alina back into the fold shows that he does have some measure of commitment to putting his faith into practice. Nonetheless, his opinions regarding her case wind up calcifying around practically medieval rituals, and an exorcism service is soon put on the table.

As any number of entrants in the so-called Romanian New Wave have done, Beyond the Hills successfully paints an unflattering picture of various apparatuses—hamstrung by official neglect, unwieldy rules and regulations, or else reflexive not-my-job evasion—that have totally failed to accommodate the public interest they’ve ostensibly been set up to serve. In the orphanage, Alina and Voichita were faced with the prospect of systematic abuse from the male population; the foster system subsequently provided Alina with a roof and some semblance of security, but no real measure of comfort or stability. In the nearby town, hospital employees and law enforcement officers only pay cursory attention to the cases before them, at the same time occupied either by personal matters or lapsing into mundane observations. While the convent’s devout Eastern Orthodox Catholics feel obligated to aid those in need, their methods of doing so appear hampered by a severely limited worldview, conditioned by years of submission to ancient traditions.

From an institutional perspective, Beyond the Hills is mercilessly dry—the interiors, particularly at the convent and the hospital to which Alina is taken, are depicted as overwhelmingly anonymous, indifferent. (The typically alert camerawork comes courtesy of the Moldovan-born cinematographer Oleg Mutu, DP on The Death of Mr. Lazarescu, 4 Months, and, most recently, the splenetic Russian film My Joy.) From a personal perspective, the film is absolutely shattering. Alina, entirely alone while abroad, goes to retrieve her companion only to wind up in nearly the same crushing cycle of custody removes she had fled from in the first place; Voichita—who no longer feels for Alina as she once did, having found a measure of comfort in the highly regimented convent life—is least passive of all in her seeking of help for Alina, but only winds up caught in the middle as Alina and the Orthodox church set out to punish each other.

Mungiu renders all this with shots that only seem to increase in duration, so that as the tension reaches its height, the film approaches what feels like real time. Meanwhile, drab-interior spaces, boxed-in long-take master shots, and the intrusion of ticking clocks are keynotes; the onset-of-winter setting effectively enhances the sense of the compound’s isolation, as well as the suffocation of accumulated misunderstandings. The word masterful would not be out of place here: Working with spare, watchful compositions, Mungiu patiently establishes the variable pitches of his characters’ obstinacy—to the point that we begin to see something like dignity in their rigidity of behavior and belief—before ushering the inevitable conflict between them to its devastating natural end.