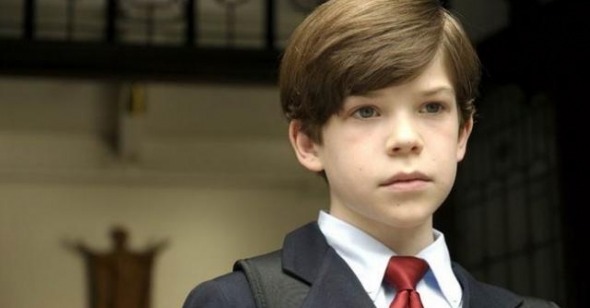 Surely You Kid
By Michael Koresky

1) He has begun to exhibit an antipathy toward sports, devoting his extracurricular time to the decidedly less masculine hobby of playing piano; 2) He prefers the company of his swishy, ‚Äúalternatively life-styled‚Äù uncle to his more fun-loving, jocular dad; 3) He constantly fusses with his appearance, i.e., the tidiness of his hair, the cut of his dandyish school uniform; 4) He begins to show a predilection for art, enjoys museums and history, and appreciates aesthetics at an early age; 5) He views himself as an outcast, asks if his parents view him as ‚Äúweird,‚Äù and his thoughts often turn to death, and a loathing of the surrounding world.

Woe to the moms and dads who follows Ratliff‚Äôs guide to parenting‚Äîno sensitive coming-of-age drama, his Joshua is actually a histrionic horror film, opportunistically playing off of every single movie clich√© about creepy kids in the service of some preposterously conceived, sloppily executed takedown of insular, privileged white family life. Preadolescent Joshua (blank Jacob Logan), who embodies all of the tendencies described above, becomes a victim of fear and distrust by his parents. To deal with this aberration, this stranger who came directly from their very loins, moneyed Manhattanites Brad and Abby Cairn (Sam Rockwell and Vera Farmiga) keep themselves at a great distance, largely ignoring him following the birth of his baby sister‚Äîeven as he begins to show signs of severe maladjustment. Though the movie tries to maintain careful ambiguity in its depiction of the child, and refuses to reveal if his parents‚Äô suspicions that he may, in fact, be E-V-I-L, are all in their minds, Ratliff can‚Äôt help but kowtow to cheap horror tactics. In other words, questions concerning whether Jacob‚Äôs nefariousness is in part imagined by Abby‚Äôs severe postpartum depression or Brad‚Äôs everydad desperation, are trumped by sinister lighting, an overly emotive, Shining-cribbed score (complete with string-ploinking shock cuts to time-disorienting title cards), and proclivity to have creepy Joshua pop up in shadowy hallways or from behind refrigerator doors, making his poor parents shriek.

Naturally, the dead animals pile up, and in one incredibly poorly mounted sequence, God-loving Granny fatally falls down the steps of the Brooklyn Museum of Art (incidentally, right at the moment that Brad arrives there after a risible cross-cutting mad dash via subway, all the way from the Upper East Side). Is Joshua merely a misunderstood victim in all of this, a scapegoat for his parents‚Äô deficiencies and blind spots? Is it all a self-motivated ploy for him to get to live instead with his limp-wristed, martini-swilling uncle (Dallas Roberts, in a truly grotesque performance)? Or is he just a natural born‚Ä¶well, you know. After a while, it matters little whether it‚Äôs mommy and daddy‚Äôs issue or Joshua‚Äôs; the battery of visual and aural techniques Ratliff puts his viewers through (which in no small measure seem to reference, in addition to the aforementioned The Shining, The Exorcist, The Bad Seed, The Omen, Rosemary‚Äôs Baby, and even Poltergeist) announce Joshua as one seriously demented tyke, and make the ambiguity seem all the more forced.

The performers provide varying levels of conspiracy with the silliness: Farmiga, her hair hatcheted to a fine mess reminiscent of Judy Davis‚Äôs in The Ref, lurches full-breasted into her role with misguided zeal (her croaking ‚ÄúI‚Äôm fine! I‚Äôm fine! I‚Äôm fine‚Äù into a mirror while holding a camcorder is a particularly low moment), while Rockwell seems driven to ironically distance himself in order to maintain dignity. He doesn‚Äôt. Add to all this Michael McKean‚Äôs hilariously clipped performance as Brad‚Äôs uncaring boss (McKean‚Äôs evident day-job duties consist of him huffing and puffing in and out of his Brad‚Äôs office with bloated disinterest) and one of the least convincing child psychologists in film history, written as an authoritarian monster and played by Nancy Giles with an utter lack of empathy. Meanwhile, poor little Logan is directed to act like every single other dead-eyed cipher child ever forced on screen. Free of the burden of nuance, he merely has to walk into a room in his tailored suit, utter some creepy phrase without the slightest hint of emotion (‚ÄúSomeone died in this apartment‚Äù), and cue the strings.

I‚Äôve read in interviews with Ratliff that he‚Äôs embracing his audiences‚Äô ‚Äúnervous laughter‚Äù‚Ä¶well, he better, because there are bound to be a lot of titters; indeed, it‚Äôs hard to keep a straight face during Joshua, so poorly does Ratliff establish space or tone. Ultimately, Ratliff hasn‚Äôt done much more than add a particularly stupid entry to the ‚Äúlittle boys in suits are scary‚Äù subgenre, and this one comes with a thoroughly uninvestigated stench of homophobia. I‚Äôm not convinced it was Ratliff‚Äôs intention to demonize its main character for his burgeoning differences (he prefers Bartok to baseball . . . horrors!), but then why, in its final scene, does little Joshua turn to his gay uncle, as they sit together doing a piano duet, after mommy and daddy are out of the picture, and say, ‚ÄúThis feels right‚Äù? Okay, George, you finally creeped me out.