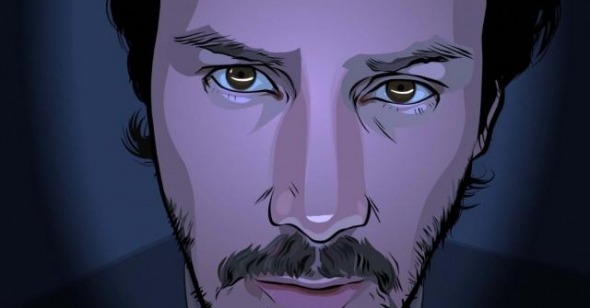 Much to my great dismay, Richard Linklater’s heady, intelligent, beautifully empathic vision of a rather quotidian and familiar dystopia is in the running to be the least appreciated film of the summer. The facts of its production have generated a set of expectations that it cannot ever hope to match. Given that A Scanner Darkly features Keanu Reeves and is based on a novel by Philip K. Dick, the prolific author of source material for Blade Runner and Total Recall, one would be forgiven for anticipating that it would conform to the exigencies of science fiction. But it doesn’t; rather, Linklater has chosen the one novel by Dick that accords with his own sensibilities, resulting in a film that melds two parts of his career: the idle eccentricity of his early slacker comedies with the aesthetics and metaphysical heft of Waking Life and Before Sunrise/Sunset duo. Though far from perfect, it may be the ultimate Richard Linklater film.

Keanu Reeves plays Bob Arctor, bringing his usual sleepy nonchalance to the role of an undercover drug enforcement officer working in the very, very near future. Orange County, indeed the whole of America has become a surveillance state, one whose primary source of paranoia has shifted from terrorism to drug trafficking—specifically, the proliferation of a virulently addictive, psychotropic known as Substance D. “There are no weekend warriors on Substance D; you’re either on it, or you’re off it,” the film intones, and Arctor is assigned to monitor the activity of a trio of junkies—though to what end remains an inconsequential mystery. The plot doesn’t so much unfold as diffuse with little discernible direction; there is no sense of whom to root for (or against), and the film’s only purpose is to chronicle the manifold effects of the drug. It induces massive psychotic breakdowns in the grubby, ferrety Charles (the delightful Rory Cochrane) who envisions swarms of stubborn locusts crawling all over his body; turns Ernie (Woody Harrelson) into a twitchy stringer with a hair-trigger temper; and allows Barris (Robert Downey, Jr.) to become loopy, expansive, and philosophical. (Winona Ryder, playing Arctor’s girlfriend, is a cocaine addict, which merely makes her mentally distant, and averse to physical contact of all kinds.) Arctor, of course, becomes an addict in the course of his assignment, but his response is far subtler: Substance D slowly, inexorably peels away the surety of his own self, and his psyche becomes cleft in two. And yet he already lives a double life. While at home, Arctor is himself—scruffy, hangdog, vague, and vaguely skeptical of the world around him. At work, he must don a “scramble suit,” clothing onto which is projected a kaleidoscope of perpetually shifting identities, such that his true appearance is obscured by a cascade of the races and classes that make up America. To complicate matters more, Arctor is required to review hours of surveillance of himself. Buffeted by chemical dependency and the need to conceal his own self, identity for Reeves’s character is as fluid and transmutable as A Scanner Darkly’s aesthetic.

Using the technique he pioneered with Waking Life, Linklater shot and edited the production as though it were a regular film, then handed it to digital animators, who recreated every frame with CGI brushstrokes. The finished “rotoscoped” product is a painterly simulacrum that conforms to the colors of reality but is continually oscillating, as though charged with nervous energy. But where in Waking Life the camera was essentially static, in Scanner it’s largely unfettered. As Linklater tracks through space, objects move in all sorts of obtuse and unpredictable ways, as though sliding on tracks and disconnected from the world around them. Spatial relationships that are normally understood as fixed relative to one another suddenly become variable. Deployed this way, rotoscoping is a perfect aesthetic correlative to the aura of unbalanced discomfit that pervades the film. Physical reality becomes an unpredictable and ultimately unknowable commodity because, perforce, it can only be experienced through the remove of sensory perception.

Arctor (alias “Fred” when he dons his narc-mandated “scramble suit”) views his own life at a double remove—first, complicated through the mind-frying Substance D. The drug creates a bifurcation in Arctor’s mind such that both the left and right hemispheres of his brain compete for status as the true representative of indexical realism. The simile used by the film’s solicitous, eerily calm neurologists to explain the disconnect is that the world is like a car with a half tank of gas. Under the influence, one brain hemisphere, (i.e. fuel gauge) registers empty, while the other hemisphere registers full; a fight rages between both brain halves for which one accurately reflects the truth. (Though, if the world is transmutable and inconstant, as it is rendered under rotoscoping, where does indexical truth lie? For that matter, is the film’s aesthetic a reflection of its characters’ perception of reality, or extra-diegetic? Is it an internal manifestation of sight or one imposed externally? These questions fringe the film, but remain tantalizingly unanswered throughout.) The second remove occurs as Arctor reviews the surveillance of activities recorded from his home; rewinding, fast-forwarding, pausing and slowing down the moving image. The motive for his police work slips down from civic duty to a search for a true reckoning of his own experiences—and a hope, as per the title, that the so-called scanners can see more clearly into his own life than he can himself. Along this line of inquiry, A Scanner Darkly resonates with the questions of illusionism that fascinated Bazin. Thus, A Scanner Darkly is likely this summer’s most incisive (and only) thorough meditation on the cinematic apparatus.

A Scanner Darkly is surely erudite, but it’s hardly staid or clinical. As with all of Linklater’s work, (yes, even School of Rock), the drama is mordant, funny, and humane, all of this with the express purpose of bucking contemporary science fiction. If there’s a thru-line from THX 1138, Blade Runner, and Minority Report to the raft of unremarkable toss-offs from recent years (Aeon Flux, The Island), it’s that the future is dour, cheerless, and a pretty fucking dreary place to live. Under the weight of bland, faceless totalitarianism, overwhelming emotional repression always wins out in a far, far distant future. Set “seven years from now,” A Scanner Darkly’s atmospheric culture—wardrobe, automobiles, hairstyles, verbal tics, etc.—are basically contemporary to now; its only concession to advanced technology are those astonishing “scramble suits.” But its stubborn lack of futurist gadgetry isn’t the only way that Linklater’s sloughing off the trend of current science fiction: he makes the future as distracted, as amusing, as, alive as now. Reeves may be the film’s ostensible protagonist, but Robert Downey Jr., whose Jim Barris is the very avatar of its unhinged delirium, is the glue that holds it together. Unspooling diatribes against the surveillance state cum narco-industrial complex that rules his existence, Barris is an oddly sane and insightful mad prophet who retains a special relationship with the English language. He accentuates the wrong syllables, as if rejecting, prima facie, the fundamental strictures that make up his world. More so than any other actor in the film Downey Jr. seems to understand Linklater’s project of wresting science fiction from the realm of ossified objects and turning it into something that breathes—humorously, darkly.

Ultimately, A Scanner Darkly is more than anything about faithfully conveying the spirit of the novel, and more importantly, Philip K. Dick’s ambivalent take on—and relationship to—drugs and drug culture. The author himself was a documented abuser—his two daughters, Laura and Isa have even admitted that that their father’s drug use was endemic to his early death in 1982—and much of the film/novel’s tone and themes have been culled from Dick’s own experiences. It is part cautionary tale, insofar as it documents how usage can so completely addle someone’s mind, but tuned such that it doesn’t lord a stance of moral superiority over its subjects. Indictment instead comes down on the hypocritical, disinterested superstructure, which casts a pall of unending anomie such that addiction is almost necessary to survive life’s bleak prospects, and yet punishes transgression without regard to particular exigencies. So when one of the main characters’ mind fractures—I won’t say whose—the film clearly casts its lot on the side of drugs are bad; and it also, in the name of telling an even-tempered story, conveys the momentary euphoria of being in thrall to chemicals (without Requiem for a Dream’s incessant foreshadowing of doom). Graft onto the film whatever political allegory you’d like; among everything else, A Scanner Darkly is primarily devoted to gently humanizing and sympathizing with an issue that is too often sensationalized and abstracted. Linklater, as a proxy for Philip K. Dick, seems as though he’s out to understand, not to condemn. His film is sublimely, breathlessly touching, because it overcomes the nigh-impenetrable difficulty of imagining other people, and other people’s pain (with apologies to Elaine Scarry). Dick’s epilogue says it best:

This has been a story about people who were punished entirely too much for what they did. I loved them all. Here is a list, to whom I dedicate my love:

. . . and so forth. In memoriam. These were comrades whom I had; there are no better. They remain in my mind, and the enemy will never be forgiven. The “enemy” was their mistake in playing. Let them play again, in some other way, and let them be happy.