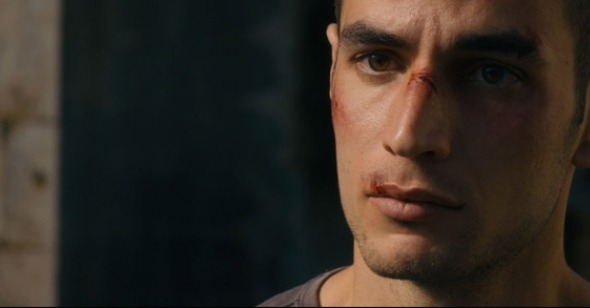 Looks can be deceiving in Hany Abu-Assad‚Äôs Omar. For instance, its protagonist is a baker, but he looks like a model. Actor Adam Bakri‚Äôs lithe, sculpted handsomeness is the first thing one probably notices about Abu-Assad‚Äôs follow-up to his minor 2005 festival sensation Paradise Now. It‚Äôs not beside the point to talk about Omar‚Äôs movie-star looks (or his fashionable and great-fitting jeans), because it‚Äôs the first indication of the smoothness and conventional aesthetics of this well-structured, compelling thriller, the political context of which both defines and helps it transcend its generic trappings. Omar, about a volatile young Palestinian man in the West Bank used as a pawn by both friends and foes, is never less than gripping, even if its portrait of life under occupation often takes a back seat to its finely honed suspense tactics.

Nevertheless, the milieu does a lot of the dramatic and political heavy lifting. Many a shot in Omar is dotted with looming, incongruously cheerful billboards for Rawabi‚Äîa huge ongoing development project that will result in the West Bank‚Äôs first Palestinian planned city. Such signs promise not the dream of escape but of settling and ownership, surely a seductive concept for those living under occupation. These conflicts have been playing out since long before Omar was born. As the film begins, we are made aware that his daily life consists of risk-tasking: we first see Omar climbing one of the many dividing walls the Israelis have erected throughout the Palestinian territories, and instinctually dodging machine-gun fire when he reaches the top. Early twentysomething Omar, who works (seemingly alone) in a bakery rolling and firing pita bread, is defined by his love for his friend Tarek‚Äôs sister, Nadia (Leem Lubany), and his hatred of the city‚Äôs occupying forces. Early on, he is subject to side-of-the-road humiliation and abuse by Israeli police, who are depicted with enough chuckling villainy to turn any viewer against them; we are made to automatically sympathize with Omar in his frustration. It‚Äôs not surprising when it turns out that he and his two compatriots, alpha-male Tarek (Iyad Hoorani) and scrawny Amjad (Samer Bisharat), are plotting to shoot an Israeli soldier, in sniper-style, as an act of defiance.

At first, these three young men have such a natural, freewheeling rapport‚Äîamong Amjad‚Äôs most charming traits is a serviceable Brando impression‚Äîthat it‚Äôs easy to forget they‚Äôre living in a psychologically constricting war zone. The casual interaction of these three amigos is short-lived. After a short but jarringly sound-edited scene of target practice in the woods (every rifle discharge reverberates with mighty force), they summarily accomplish their killing; Amjad pulled the trigger, but days later only Omar is caught and hauled in. Following an intense bout of interrogation‚Äîwhich DP Ehad Assal nearly eroticizes in his camera‚Äôs fixation on bodily torture‚ÄîOmar is imprisoned and tricked into a pseudo confession by Israeli police officer Agent Rami (Waleed Zuaiter, a spitting image of Mandy Patinkin in Homeland), who‚Äôs undercover as a fellow Arab inmate. Because of this bit of entrapment, Omar has little choice but to make a deal: he promises them Tarek and they promise to let him off the hook. Omar has his own, hidden plans, but he cannot take into account just how coldly Nadia‚Äîand his roiling hormones‚Äîwill be manipulated and wielded against him by both the police and his fellow resistance fighters.

Ultimately, Omar pivots on its protagonist‚Äôs love for Nadia, which cloaks his sometimes noble, sometimes questionable, often self-defeating decisions in a likeable romanticism. Abu-Assad doesn‚Äôt truly complicate the viewer‚Äôs relationship to Omar, who, despite his involvement in a killing, is finally a nice kid in over his head. Repeated shots of him watching ants crawl along the floor of the prison cell, where he ends up twice, are reminders of how those in his vicious circle of associates ultimately view him: as little more than an insect, easily crushed. In his violent seeking of liberation from his oppressors, he ends up even more trapped, given no options on either end and granted only the illusion of control over his own fate. By the close of the film, after a last-act twist revealing that he‚Äôs been even more betrayed than we initially thought, he‚Äôs become single-minded and bent on revenge, a heat-seeking missile.

Abu-Assad‚Äôs Paradise Now was an attempt at humanizing suicide bombers that seemed aimed specifically at western audiences; via fairly conventional narrative strategies, the film sought what was for most viewers unthinkable‚Äîidentification and empathy with violent Arab extremists, not five years after the 9/11 attacks on the World Trade Center. A surpassingly accessible film about terrorism, Paradise Now may have ultimately been more discomfiting in outline than in execution, but it was without question a confrontational and provocative film about people pushed to extremes. The smoother Omar is similarly engaged with making the viewer experience and feel the kind of rage and fear of helplessness that must come with living under the thumb of an occupying regime. Though the film toys with us by gesturing at dividing our sympathies between Omar and Agent Rami (who‚Äôs painted as a sometimes likeable father figure and workaholic), there‚Äôs finally no question about who we are meant to identify with. We are encouraged to crave Omar‚Äôs climactic act of vengeance and simultaneous self-sabotage, a moment so cathartic and final that the film can only cut to black. It‚Äôs a fitting exit for a troubled antihero‚Äîbut also for a beautiful movie star.