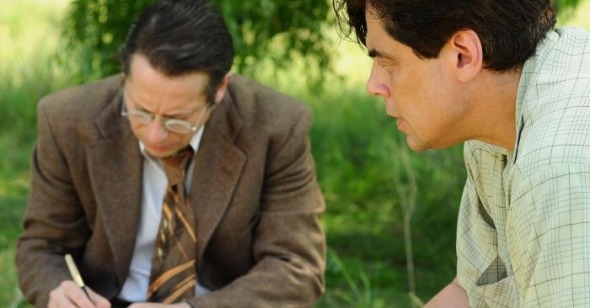 Show and Tell
By Max Nelson

Unlike, say, surgery, psychoanalysis doesn‚Äôt easily lend itself to cinema. It never arrives at any complete access to its object of study (the patient‚Äôs private, closed-off mental life) and visually speaking, it‚Äôs a much more static process: much of the analyst‚Äôs interpretational work comes down to semantics; to figuring out on the most basic level what the patient is saying (or trying to say). Every petty definitional quibble becomes a stumbling block, a glitch keeping two people from communicating freely, directly, transparently. Even so, this kind of verbal stand-off can make for fascinating viewing: there‚Äôs something transfixing about watching two faces exhaust themselves in synchronized stabs at coherence, each painfully aware of a contrast between the depth and pliability of inner experience and the relatively clumsy vocabulary available for its expression. How far inside the mind can words reach?

Arnaud Desplechin‚Äôs Jimmy P: Psychotherapy of a Plains Indian is a curious case: a scrupulously faithful adaptation of Georges Devereux‚Äôs influential work of psychology-cum-anthropology Reality and Dreams that toes a narrow, wobbly line between honoring and subverting traditional therapy‚Äôs reliance on the spoken word. Devereux, a French-Hungarian renaissance man (his early career included, among other things, poetry, music, chemistry, and bookselling) who could hold forth at equal length about Freudian dream-analysis and Mohave burial rites, came to Topeka in 1946 to work with the celebrated psychiatrist Karl Menninger at the latter‚Äôs clinic for war veterans. In his book, he cites the clinic‚Äôs initial referral message: ‚ÄúWe have an Indian patient, who, in terms of our usual criteria, may conceivably be psychotic. At the same time‚Ä¶ he may merely be an Indian, whose personality makeup and behavior we do not fully understand.‚ÄĚ

Those lines, along with many of the subsequent sessions held between Devereux and his unnamed patient (alias James Picard), turn up practically verbatim in Jimmy P‚ÄĒand, all things considered, the transition between mediums is surprisingly smooth. (Much of this is down to the film‚Äôs fluid, intelligent screenplay, which Desplechin co-wrote with Julie Peyr and Kent Jones.) At its best, Jimmy P is a chance to see two terrific actors propose two very different strategies for working through‚ÄĒand with‚ÄĒlanguage. There‚Äôs Mathieu Amalric as Devereux, shooting out mellifluous flurries of words in a state of constant, edgy excitement, and Benicio del Toro carefully stringing one syllable to the next in response as if each were its own leap of faith. (‚ÄúMy thoughts‚Ä¶ they‚Äôre‚ÄĒall‚ÄĒmixed‚ÄĒup.‚ÄĚ) If Amalric/Devereux is concerned with synthesizing each word into a graceful, unified whole, del Toro/Jimmy goes after meaning in the opposite direction, breaking each sentence down to its blunt-edged atomic parts. Watching both approaches bounce off one another is thrilling, and would probably be enough to sustain a feature on its own.

More often, though, we see del Toro‚Äôs monologues‚ÄĒa mixture of reality and dream‚ÄĒplay out in a traditional flashback-voiceover mode: Jimmy struggling with a faceless, overalled assassin; undergoing a traumatic first sexual experience in a hayloft at the hands of an older teenage girl; staring down a newborn infant on a barren hillside; hunting foxes with a dream-Devereux; sprinting through a wide-open field after seeing his mother in another man‚Äôs arms; standing in a small patch of brilliant flowers on an otherwise newly mowed plain. These are beautifully assembled sequences, and when paired with Howard Shore‚Äôs orchestral score, they take on a classical, Old Hollywood tint. (At one point midfilm, Desplechin sends Devereux and Jimmy to an old-fashioned movie house for a screening of John Ford‚Äôs Young Mr. Lincoln.) But there‚Äôs a sense in which these sequences also do an injustice to the film‚Äôs source text. They suggest that the camera has a kind of privileged access to Jimmy‚Äôs psyche; that moving images can give directly what finger-paintings, diagnostic tests, and all those words, words, words can only hint at: a precise account of what‚Äôs going on inside this man‚Äôs head. It‚Äôs often hard to see what new information these visualizations are adding, and easy to see what they‚Äôre taking away: the visual drama of del Toro and Amalric‚Äôs verbal exchanges.

Another way of putting all this is that, as depicted here, Jimmy‚Äôs psyche simply doesn‚Äôt go very deep. For all Devereux‚Äôs reminders that psychotherapy is a lifelong process; that relapses are healthy, etc., the film‚Äôs ending is strikingly clean: Jimmy feels his symptoms peter out, receives a mystifyingly simple diagnosis (psychic trauma, or, as Devereux calls it in a rare moment of half-condescension, ‚Äúsoul pain‚ÄĚ), has a happy one-night fling, and reaches out to his estranged daughter. Another example of Desplechin‚Äôs textual fidelity, maybe: Reality and Dream ends on an equally contented note. (‚ÄúAt this point,‚ÄĚ Devereux concludes, ‚Äúthe objective demands of reality merge and become compatible with the subjective need for a magical mastery of reality; archaic and infantile attitudes, now handled in an adult manner, become sources of strength, and the patient is enabled to lead a constructive life without ceasing to be himself.‚ÄĚ) Maybe, too, Jimmy P‚Äôs last-act bow-tying is another of the film‚Äôs many nods to American movie history. In its long stretches of charged talk, its sturdy, steel-lined compositions, and its final air of hard-won moral triumph, it seems cut from the same cloth as a film like 12 Angry Men‚ÄĒbut, also like that Sidney Lumet film, something about its gestures of self-satisfaction feels slightly unearned.

That said, there are still passages of Jimmy P that stay satisfyingly, richly unresolved. When Devereux‚Äôs lover Madeleine (Gina McKee) exits Topeka, she leaves a farewell letter that, distance be damned, we see her read aloud in a radiant frontal close-up: a strange cross between Brechtian third-wall-breaking and classical Hollywood exposition. Desplechin has mined this tension before, notably in Kings and Queen‚ÄĒthe raw, jittery, frayed ying to Jimmy P‚Äôs statelier yang. (Both films touch on the tie between mental health and the state of the soul‚ÄĒthere‚Äôs even a nod to Devereux in Kings and Queen, and a few lines of dialogue carried over word-for-word from the earlier film in Jimmy P‚ÄĒbut Kings and Queen, with its frantic editing rhythms, bubble-bursting close-ups, and extreme tonal shifts, makes more emotional demands on its audience than Jimmy P ever intends to, or dares.) Madeleine‚Äôs brief monologue isn‚Äôt, stylistically speaking, a radical departure from the rest of Jimmy P, but it is a subtle subversion: one of the few moments when this movie‚ÄĒwhich has otherwise, for the most part, left us feeling like invisible spectators in a kind of psycho-surgical operating theater‚ÄĒturns and addresses us (accuses us?) head-on. It‚Äôs striking proof of Desplechin‚Äôs ability to find an effective division of labor between the image and the word, in a film where their functions tend, sometimes redundantly, to overlap.