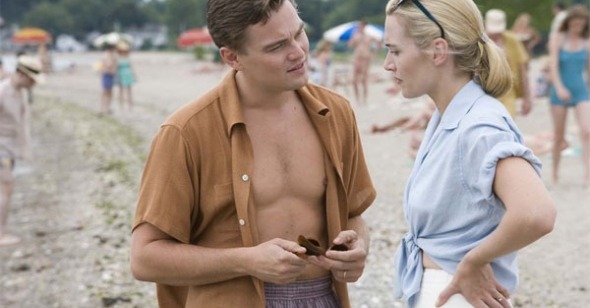 Let‚Äôs put it plain: in any sane world, Revolutionary Road would be laughed off as a joyless embarrassment before we moved on to more pressing business. Yet while this latest Oscar-baiting turkey will doubtlessly find its ultimate fate in the critical memory hole, the reason for the season demands that we speak of it as if it deserved serious consideration; as if this is a case of ‚Äúflaws‚Äù in an otherwise worthy whole. Make no mistake, though: this is folly of a grand order, though any potential glee one might take in skewering it is deflated by the ruthlessly enervating experience of sitting through it. This, perhaps, is the most devious stratagem of the would-be prestige pic. The almost calculated air of mediocrity that hangs about such tripe blends it seamlessly into the muddled background of innumerable nondescript films seen and long forgotten; they bank on lazy perception and short memories to procure their brief moment of rote, half-hearted praise.

A brief admission that the derivation of this particular piece of bilge remains unknown to me: Richard Yates‚Äô 1961 source novel apparently commands a degree of respect from those who presumably Googled it to prep for their reviews of Mendes‚Äôs adaptation; from the sole evidence of the latter, I can only surmise that the novel was one of the early entries in the stultifying-suburbia subgenre which helped set the mold for innumerable, progressively petrified efforts to follow. Boy (Leonardo DiCaprio) meets Girl (Kate Winslet), youthful idealism gives way to youthful apathy and complacency as the suburban dream cottage is bought, children issue forth, and hubby moves into stifling corporate milieu, a dream of reignited potential (a move to Paris, where Boy can discover what he ‚Äúreally wants to do‚Äù) smothered by the rot of upward mobility and the innate cowardice and unimaginativeness of Boy, while Girl just dies by inches inside, don‚Äôtcha know.

It‚Äôs hard to see what purchase this material is meant to have upon us in the present‚Äîand that, indeed, appears to be the very reason for the warm reception its cinematic incarnation is receiving. Safely relegated to the Fifties, or rather the clich√©d received wisdom of the Fifties that we have been schooled in so diligently, the story need never intrude upon our own comfort zones, our own desires, fears, and failings. All that is required is our passing admiration for the professionally self-flagellating (and self-impressed) efforts of its grandly assembled cast, kitted out in vintage grey-flannel-suitwear or paisley skirts and smugly emoting within exquisitely set-dressed, despicably phony comic-strip representations of mid-century office buildings, road houses, and bungalows. This is an ‚Äúactor‚Äôs picture,‚Äù without a doubt, and more than any film in recent memory it vividly demonstrates the precept that the critic‚Äôs adjective ‚Äúpowerful,‚Äù when applied to the thespian art, most often denotes ‚Äúloud‚Äù and ‚Äúbad.‚Äù

However, while each of the assorted collaborators should rightly be accorded their own specific share of blame, one should be wary of the lures of snark when picking apart specimens like these. Personalizing the abject failure of a film in the guessed-at ‚Äúsensibility‚Äù of the director or the inflated persona and mannerisms of a lead actor overlooks the fact that the responsibility resides not merely with personal flaws, but a whole system of thought and practice. ‚ÄúSam Mendes‚Äù might be a watchword for middlebrow pretension and self-importance, but to castigate Revolutionary Road as an immaculate issue from his contaminated loins is to misunderstand its congenital idiocy. Mendes is merely the enabler for a host of misconceived impulses to run riot, most damningly among his principal cast.

To begin with the above-title names, DiCaprio typically travels light(weight) with a four-mode repertoire‚Äîsmirking, arched-eyebrow ‚Äúnow-honey-let‚Äôs-stop-this-foolishness‚Äù condescension; arm-flailing, dead-eyed rage; puppy-eyed, false-dawn spiritual rejuvenation; and smooth-talking hollowness that makes falsity look false‚Äîthat he simply alternates at the appropriate moments in the script, relying on his still-youthful but slipping-into-puffiness beauty to grease the methodically changing gears. Winslet, gifted with an immeasurably wider emotional range and a skilled and nuanced technical control, is naturally charged with most of the emotional heavy lifting, which she tackles with all due professional self-interest. Eyes wide, voice trembling, hands gesticulating forcefully to emphasize the soul-stirring importance of every line of screenwriter Justin Haythe‚Äôs unutterably banal dialogue, Winslet displays the instruments at her command with deserved self-satisfaction and zero emotional affect. Happily pulling out all the stops at every duly signaled opportunity, she forgoes any tactful reticence which might make the emotional peaks sharper, or, indeed, truer‚Äîuntil, of course, the would-be devastating conclusion, where her eerie calm and preternatural poise practically screams a warning about the imminently dropping other shoe.

Arrayed in support of the starry duo is the kind of ensemble which must play wonderfully to financiers, and whose collective sense of well-employed character-actor entitlement propels each into affectations of lunatic dimensions. Dylan Baker, bow-tied and sporting a stage-voiced British accent that is the last word in ambiguously fey; Kathy Bates, whose attempts to blithely slough off the provocations of her belligerent, freshly asylum-sprung son makes an already awful scene play like a parody of itself; and Michael Shannon (one should already say ‚Äúof course‚Äù) as the ex-loony and de rigueur mouthpiece for uncomfortable truths, cheapening his mesmerizing force and slightly otherwordly sense of the absurd with a rote psycho turn which he condescends to with every spittle fleck, bellowed imprecation and wild bout of Nietzschean laughter.

Amongst this bevy of purpled clowns, it‚Äôs only fitting that the film‚Äôs best performance emanates from its most demeaning role. Zoe Kazan, as the prettyish dough-faced secretary whom DiCaprio casually beds, offers a pleasing little show of chirpy callowness and the inarticulate depth of feeling that underlies it, particularly in her perfectly precise look of deflation after DiCaprio beats his glib retreat from her room. This is a little moment so truthful‚Äîa moment that she makes truthful‚Äîthat it almost compensates for the flagrantly gratuitous and rather cruel topless shot Mendes forces on her just prior, highlighting her plainness the better to set off the glamour of the smugly entitled star and his character‚Äôs ‚Äúlowering‚Äù of himself by consorting with such an ugly duckling (naturally, his second succumbing to her later in the film decisively marks his final slide back into moral and spiritual bankruptcy).

Lest he be forgot in this cavalcade of actorly sins, Mendes not only continues his habit of abetting noisily caricatured performances but also moves past merely borrowing aesthetics (as in the Conrad Hall‚Äìbedecked faux-noir of Road to Perdition) to forging brand new, instant clich√©s: a sea of grey hats flooding down the wide staircase of a train station (Look at all the conformity!), the line of quaint, retro-future cubicles adorned with signal lights in DiCaprio‚Äôs office, and the designated pi√®ce de resistance as the camera slowly tracks back from a transfixed Winslet in the cold morning light of the bay window, her white slip slowly staining red. A master of this kind of vacuum-packed self-importance, Mendes makes sure that every scene is just as dreadfully overdone as it has to be, occasionally going that extra mile for the real juicy confrontation scenes, particularly his Victorian-melodrama blocking of DiCaprio‚Äôs I‚Äôm-gonna-kill-him moment with a relentlessly needling Shannon.

Not that any of this lengthy diatribe matters, of course. Revolutionary Road is too (slickly) bleak, too (artificially) despairing to have any populist traction with the Kate n‚Äô Leo watchers or any genuine enthusiasm among the cinema-of-quality set. This too shall pass, but it will pass with the typically courteous, respectful half-interest that all such DOA items receive. If it‚Äôs worth calling attention to these abortions at all, it‚Äôs only because it offers remarkable insight into the kind of indulgent creative climate which not only allows, but abets the talented (as well as the significantly less so) in letting their gifts desiccate, using their skills absent any nourishing reason for employing them. Revolutionary Road is far from the worst film ever made, which means that it is still perfectly dreadful enough to demand our precise, reasoned, and everlasting scorn.