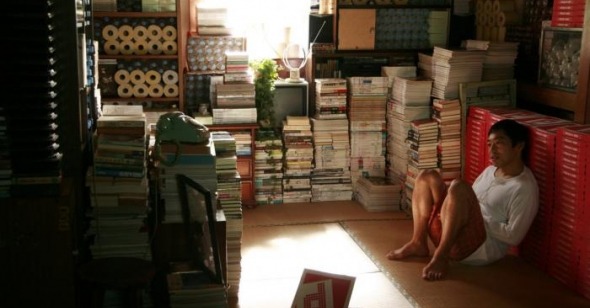 Tasking a handful of name auteurs (and occasionally some less familiar directors) with contributing short films to a portmanteau or omnibus film rarely results in a satisfying experience, more of a light buffet than a multicourse meal. Even one as promising as 1963’s RoGoPaG amounts only to one great Pasolini short and interesting, but unremarkable contributions by Rossellini, Godard, and Ugo Gregoretti. (And the less said about 1994’s Four Rooms the better.) But for a variety of reasons, Tokyo! works, offering a diverse but even triptych of tourist takes on the Japanese megalopolis, as seen through the looking-glasses of Michel Gondry, Bong Joon-ho, and Leos Carax.

The first two names on this list would be reason enough for many to see Tokyo! , and their visions fit well with the film's setting. For Gondry, a director who often seems more comfortable with short formats, Tokyo is a warm and puzzling place, a site of creativity and romance in equal portions. Adapted (and significantly expanded) from a short comic book by Gabrielle Bell, "Interior Design" follows young (and wonderfully, predictably Gondrian) Japanese filmmaker Akira and his girlfriend Hiroko, recently moved to the city and staying with an old friend in her tiny apartment while finding their feet. Like nearly all of the director's work, the film is about the joys of untutored creativity and the frustrations of finding uses for it: Akira's films are manic and absurdly arty works in the vein of Tetsuo: The Iron Man, Emperor Tomato Ketchup, and works by, well, Michel Gondry, combining Nazi bikers, helpless bunnies, and dorky paracinematic special effects. But with the low-key surrealism of its second half (and probably thanks to Bell's contribution), the focus soon shifts to Hiroko and her lack of creative purpose in the world, making the film one of the director's most satisfying and least exclusively boyish to date.

Bong Joon-ho's entry, his first film since his 2006 hit The Host, is another incisive bit of nipponophilia that showcases the director's craftsmanship and rigorous attention to mood and detail. "Shaking Tokyo" enters the world of what the Japanese call a hikkikomori, a sort of hypersensitive bourgeois shut-in who has been holing up in his apartment for the last ten years in an effort to avoid the overstimulation of city life. In the safe haven of home, Bong's anonymous protagonist spends long hours sleeping on the toilet, reading magazines, and watching sunlight move slowly across his living room. His only contact with the outside world, a weekly pizza delivery from a young woman in punk-schoolgirl attire and moped helmet, soon shakes the protagonist out of his seclusion and into a sci-fi cityscape, a process that Bong depicts with a lovely sensitivity to sound design and focus.

But if Bong's and Gondry's entries seem like no-brainers, it's the other director on this roster that makes Tokyo! a true event—Leos Carax's contribution is his first film of any kind since the spectacular career implosion that followed 1991's brilliant, exuberant flop The Lovers on the Bridge and 1999's confoundingly dreary Pola X. Infused and titled with glorious Gallic provocation, "Merde" shows that the last decade hasn't depleted Carax's nerve for button pushing or his flair for orchestrating breakneck tracking shots of crazed, balletic actor Denis Lavant running down the street doing insane things. Its opening long take, illegally shot in the bustling Shibuya district before the cops showed up, is worth the price of admission alone: it features Lavant crawling out of the sewers in a green suit, demoniacally ruddy beard, and overgrown fingernails and toenails, harassing passersby to the score of Godzilla.

Like that famous Japanese monster, Carax's Merde functions as a kind of arch Freudian return of the historical and political repressed, speaking in a bizarre gestural dialect, dining on yen and chrysanthemums, and eventually murdering random Japanese with some grenades left over from the Nanking Massacre. Once captured and put on trial, Merde becomes the mouthpiece for a general misanthropy ("I don't like innocent people") that specifically singles out Japanese people for their conservatism, their racism, and the supposed resemblance of their eyes "to a woman's sex." Sandwiched between Gondry and Bong's variously euphoric entries, Carax's contribution seems either a work of deep cynicism from an inveterate party-pooper or a welcome satirical sour note from one of the great talents of Eighties and Nineties French cinema. Either way, his entry ends with the promise of more to come: a teaser for the proposed sequel, “Merde in America.”