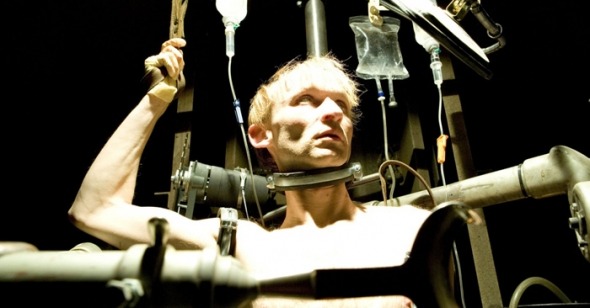 Look Away
By Elbert Ventura

Taxidermia is a drunken, lumbering lout of a movie. It grabs you by the scruff of the neck, gives you a noogie, belches in your face, and slaps you on the back. It is critic-proof—either you like the succession of genitalia, entrails, ejaculate, body parts, and nausea in impeccably arranged compositions, or you protest and reveal yourself as a whimpering bourgeois prig. Hungarian director Gyorgi Palfi perfects a kind of Gilliam-esque magic miserablism here, but to what end? He certainly proves his chops as a conjurer of the fantastical, an imagist of the first order. But his images are so repellent, his misanthropy so strident, that the true measure of his talent may be how unpleasant you feel at the end of his movie—if you make it that far.

For his first trick, Palfi shows us the awesome sight of a penis shooting flames—only one of many transgressive highlights in this lysergic triptych. The penis belongs to Vendel (Csaba Czene), a soldier in a godforsaken outpost during World War II, whose assignment seems to be to do the bidding of his lieutenant, his corpulent wife, and their two beautiful daughters. Lonely and quaking with desire, Vendel seeks gratification wherever he can get it: peeping at the daughters taking a bath, sipping their bathwater when they’re done, masturbating through a hole in his shack as he watches them play outside.

Reducing man to his base cravings, Palfi constructs a nice little vignette of overpowering loneliness. So benumbed is he by solitude that Vendel resorts to making out with the flame from a match. When the lieutenant’s wife shows up at his shack for a surprise rutting, he gives in with little hesitation. In the dark, with the butchered carcass of a pig underneath them, the two make ugly, fumbling love—the least arousing coupling this side of a Bruno Dumont film. The next morning, the lieutenant finds out about the tryst and shoots the soldier in the head. But Vendel gets the last laugh: the missus gives birth to his son, whom the lieutenant decides to keep.

Fast forward to 1960s Communist Hungary. The child, Kalman (Gergo Trocsanyi), has ballooned into a gentle, obese man. Palfi expands on the metaphor of human beings as rapacious beasts, making Kalman a rising star in the world of international competitive eating. With its depiction of Communist kitsch and hilariously involved talk of eating technique ("The Garmeyer cross-swallow? With bean soup?"), the second section seems poised to be lighter. But the grossness meter actually goes up several notches— we are treated to the spectacle of fat men shoving slop in their mouths, then gathering around a big vat in between events to puke out their guts. Palfi may drive you to do the same, as the director, who displayed a Lynchian talent for sound in his previous film, Hukkle, makes horrid music of sloshing vomit.

Revolting though it may be, the second section contains something resembling affection. Kalman meets the equally large Gizella (Adel Stanczel), the women's competitive eating champion, and the two fall in love and get married. Their son is the protagonist of the third, and least successful, of the chapters. Set in present-day Hungary, it follows Lajos (Mark Bischoff), a shy taxidermist as lonely as his grandfather was. When not disemboweling animals and stuffing them with hay, Lajos goes to his father's home to feed the embittered codger. Kalman is now a beached whale of a man, so fat that he can't get up. His hobby is training his overfed cats, kept in a cage lest they turn on their master, for competitive eating. I'll leave the denouement of this plotline for you to discover. Suffice to say that you should prepare yourself for something like Mr. Creosote from Monty Python's Meaning of Life and a taxidermist's version of Dead Ringers' climax.

A body horror film of epic proportions, Taxidermia derives much of its dread from the mundane—eating, sweating, fucking, puking. Humans are seen as little more than base creatures with bottomless appetites. (Lest we miss the point, Kalman is even born with a pig’s tail.) Lajos’s occupation (to strip once-living beings of their pith) and his final act (a mounting of his own corpse) represent rebukes of both the body and a legacy of enslavement to its needs. Palfi posits that the end product of that abnegation is—or at least can be—art. But, per the film's closing monologue, "there are things that just cannot be mounted." As with Lajos’s last work of taxidermy, Palfi's movie is elaborate in conception, ingenious in execution, but soulless in the end.

Taxidermia may evoke David Cronenberg, but it's missing that master's sneaky poignancy. The beasts Palfi parades before us are merely caricatures in a pageant, and his abrasiveness hardly conduces to introspection—you're too busy turning away instead of turning inward. Alienation from our bodies, so potent a theme in Cronenberg, here becomes more an excuse for acts of virtuoso gross-out. Contrast that with Hukkle, which was no less overweening but had a more inquisitive spirit, with tight close-ups that peered into nature and made us wonder about the limits of perception. In Taxidermia, those same intimate shots seem more assaultive than curious.

Working in the same mode as Gilliam, Lynch, Jean-Pierre Jeunet, Tim Burton, and Roy Andersson, Palfi bends every inch of physical space in front of his camera to his will. It's an impressive feat, no doubt. Taxidermia is rife with moments of what-the-fuck bombast—spectacular crane shots that break the laws of space and time, a pop-up book that comes to life, a (swear-to-god) pornographic money shot that aims for the cosmic. But for all of its brio and transgressiveness, the movie never threatens to spill out of the frame. Palfi is too exacting, too overbearing a maestro. There were hints of a messier movie—a wild animal instead of a stuffed one—in the opening section, with its Kusturica-esque bawdiness and feverish tumescence, but it all gives way to antiseptic hectoring and disdain for all things human.

Pushing our tolerance for viscera to the limit, Palfi fancies himself a truth-teller by showing us what we're really like on the inside. The last few minutes of Taxidermia dials the gruesomeness up to 11. Tough to stomach—literally—the scene also casts a pall over what preceded it. Is this merely a one-man game of one-upmanship? Mondo bizarro given an art-house gloss, Taxidermia is hard to dismiss—but it's even harder to watch.