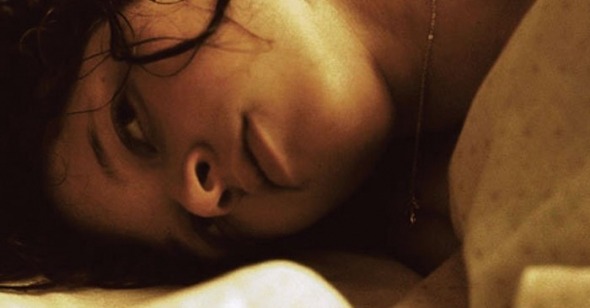 Chutes Too Narrow
by Andrew Tracy

That two of this year's best films, Lisandro Alonso's Los muertos and Lucretia Martel's The Holy Girl both hail from the same national cinema (Argentina) gives a unique opportunity to observe the workings of the system which gives these films shelter in the wilds of the world film market. Alonso's tough, lean, and rigorously focused study of man in nature, clocking in at a trim 78 minutes, seems destined solely for the specialized environs of film festivals (Alonso himself says that the film is most appropriate for one-night stands on university campuses) where a determined audience can read Alonso's terse filmic language to find the looming implications lurking at the edges of his narrow frames. At the other end of the scale stands Martel's sensual intertwining of religion and teen sexuality, bathed in consciously luxurious images and-as opposed to Los Muertos' protagonist, onscreen and real-life peasant Argentino Vargasâ€”featuring attractive, privileged white people ensconced in the comforts of a modern hotel.

This isn't condemnation, simply recognition that stylistic concerns and class assumptions cannot so easily be separated; the one informs the other, and vice versa. Alonso himself made this connection explicit when discussing his debut feature, La Libertad (2001), in an interview with Cinema Scope: â€śIn Argentina, people make many movies about the city, but I prefer to discover my country-it's a big, big country and a lot of people live far away from the city and lead different lives. I prefer to see those kinds of people. Something like [Martel's first feature] La ciĂ©naga (2001) also takes place outside of the city, but it shows people who have some money, so it's different.â€ť That difference-and the general unwillingness of marketers and audiences to consider the lower half of that difference-extends to the reception these films receive outside of their country. The system which slates Alonso's film for respectful obscurity is clearly propping up Martel as the next big thing on the global arthouse circuit, complete with Pedro Almodovar lodged under an executive producer credit.

It's ironic that global exposure can breed (and subsidize) agoraphobia in artists. The kind of exploration vaunted by Alonso is more often than not shunted aside for packageable, â€śculturedâ€ť exoticism, the lure of international distribution suckering genuine, singular talents away from the urgency which gives their talent life. It's a factor that Martel will almost certainly have to contend with in the future, a struggle almost as difficult as that facing Alonso. For both filmmakers, the question of distribution puts their art at stake; Martel's smooth road has as many potential pitfalls as Alonso's rocky terrain. So we had best cherish The Holy Girl before careerism casts so much that is intrinsic to it into a harsh light, before the basic assumptions which contribute so much to its beauty mesh incriminatingly with those of the market. Artists can't exist in a vacuum, but for a brief moment, they can hover in their own delicate sphere before being pulled down to earth.

Perhaps prophesying this descent, The Holy Girl's opening credits fall gently into place, leading us into Martel's first shot with smooth assurance: a beautiful woman sings a hymn in intimate close-up, the quavering passion we at first read in her features revealing itself as anxiety as her breath gets shorter and notes are awkwardly cut off. Faces of young girls surround her, each possessed of that gawky teenage distinctiveness which belies the older woman's porcelain beauty. Only gradually does Martel single out her protagonist from among this shifting sea of close-ups: Amalia (Maria AlchĂ©), who listens keenly as her best friend Josefina (Julieta Zylberberg) whispers that she has seen their crack-voiced Bible teacher kissing (â€świth their tongues!â€ť) a man in the street. The predictable dualism is set up within the first two minutes, yet Martel never takes it down the smirking path that goes over big with the self-satisfied, Friday-night arthouse set, even though the material itself seems ripe for the nudge-wink treatment. When Dr. Jano (Carlos Bellosa, a dead ringer for Steven Soderbergh) presses himself up against Amalia in a crowd watching a street performance, the devoted biblical student believes she has found her â€śvocationâ€ť-which she pursues by literally pursuing the increasingly harried Jano through a medical convention he is attending at a hotel run by Amalia's divorced mother (Mercedes Moran), who is also drawn (in a more explicitly carnal sense) to the balding, middle-aged physician.

The jokes are there to be made, but are never told. Martel has no interest in the condescension and mockery which is so often mistaken for â€śintelligentâ€ť filmmaking. Her close-ups don't probe for weakness, they embrace with compassion even as they critically observe. Martel herself has likened her stylistic approach, appropriately, to that of a doctor intently examining each part of the body in turn, a process both methodical and intimate. Where La ciĂ©naga searched for unity and wholeness through measured distance, in The Holy Girl they are sought through the fragmentary and the unformed; as the â€śperfectâ€ť beauty of the first shot reveals its stresses and fissures, AlchĂ©'s mesmerizing ordinariness guides us into a realm where the seemingly most radical extremes are bound together. Piety and sensuality share the same edge, along with a host of other opposites: the crowd which serves as ingress to an intrusively intimate experience; Amalia's happily fractured family embedded in the transient world of the hotel; the frequent visits to the swimming pool, where, as Martel notes, one is allowed to be almost nude with complete social sanction; and most remarkably in a scene along a highway and its bordering forest, where danger and joy blend together in one of the most exhilarating and magnificently choreographed sequences of this year.

It is these kinds of shifts and merges which keep The Holy Girl elusive and mysterious, away from the quantification that would weigh its appropriateness as a Weinstein-worthy â€śprestigeâ€ť product. Distinctiveness hasn't yet given way to brand-naming; Martel is still more interested in exploring her strange, cloistered world than in delivering it up to order. That the world she presents is far more stylistically and socially accessible than that of Los muertos in no way dooms her to the high-class whoring of the Salleses, HallstrĂ¶ms or SzabĂłs. Social divisions inform art, they don't control it-unless the artist allows them to. Martel's films will remain relevant as long as she does, as will those of Alonso. Poles apart though they are, The Holy Girl and Los muertos represent on either side of that still crucial difference a solidarity of purpose, a searching curiosity that propels them beyond the dictates of class, the closed confines of the marketplace, or even the top ten list on which I'll be placing both of them. They're art-in-embryo, temporarily suspended above the promoters and critics diverting films into their own channels of concern. Whether that art eventually emerges stillborn hardly matters for the films at hand. Sophomore efforts both, they've already joined the current which rushes past the demands of the moment.