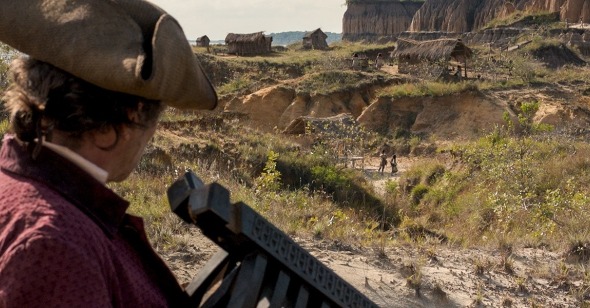 Stuck in a Moment
By Adam Nayman

One of the first words spoken aloud in Zama is “voyeur!” It’s a polyvalent accusation: the term applies equally to the film’s namesake, a Spanish crown officer posted desultorily off the coast of Paraguay who takes in his surroundings and its indigenous inhabitants at all times with wary, deep-set eyes (and which narrow into purposeful points in the presence of exposed female flesh); to director Lucrecia Martel, whose fourth feature film—and first after a tantalizing, agonizing wait of eight years—reflects the same furtive, obsessive visual focus as its predecessors; and to an audience that, under Martel’s near-hypnotic control of sound and image, can’t help looking at and listening to exactly what she wants them to. If one of the principal powers and pleasures of cinema is its ability to momentarily suspend thoughts or cares about what lies outside the frame—and to trap us in rapt, passive contemplation of everything within it—then Zama can be taken an object lesson in manipulation. Every strenuously controlled moment and movement constitutes an irresistible entreaty to simply go blank and watch.

Martel has been guiding viewers into sunken places since the opening frames of her 2001 debut La Ciénaga, a film whose thick, simmering atmosphere of dog-day-afternoon torpor is uncannily affecting. (I can’t imagine watching it without the air-conditioning on full blast). The choreography of sun-stroked bodies in La Ciénaga is somewhere between Real Housewives and I Walked with a Zombie; while officially labeling her output as trance films surely stretches P. Adams Sitney’s definition in Visionary Film, there is something about the way that Martel’s mise-en-scène and sound design evoke a subconscious state of perception—simultaneously dulled and heightened—that the taxonomy feels correct. Undeniably, she specializes in characters being guided on autopilot. The heroine of The Holy Girl (2004) stumbles around in somnambulistic thrall to desires she feels yet cannot fully apprehend (no wonder the soundtrack is dominated by the theremin). The title character in The Headless Woman (2008) is dazedly puppeteered by her friends and family to forget her own culpability in a terrible crime, post-concussion syndrome as an amnesiac state of grace.

As for Don Diego de Zama (Daniel Giménez Cacho), he’s scarcely more animated, and may actually have even less agency, at least relative to his ostensibly elevated position as a midlevel government go-between. A former military hero whose bewigged hauteur evinces transparent social-climbing ambitions, Zama spends nearly the entire duration of the film, which spans 25 years narratively and two fully felt hours of screen time, awaiting a transfer order that never comes. The same embedded bureaucracy that grants him autonomy over nearly all of his outpost’s residents renders him incapable of acting in his own best interests (as the film opens, he’s impregnated one of the local women even as he carps about missing his far-flung wife and child). A functionary without any vital function, he’s trapped in a sleepy, soul-destroying limbo, and one way to read the dauntingly dense cinematic object that is Zama—which vividly but selectively adapts the scenario of Argentinean writer Antonio di Benedetto’s 1956 novel of the same name—is as a satire of male ineffectualness, and with it, of the ultimately frail psychology of would-be authority figures.

Martel has always been a political filmmaker, albeit obliquely; she’s less interested in overt representations of state power than the suggestive analogue of modern bourgeois comfort, about which she’s inherently but by no means irresponsibly ambivalent. And she’s hardly a doctrinaire feminist, either, preferring always to problematize and even undermine the innocence or righteousness of her female characters. In what has been called her “Salta trilogy,” Martel focused on women of different ages—from childhood in La Ciénaga and adolescence in The Holy Girl to prosperous bourgeois middle-age in The Headless Woman—slotting each of them progressively along a post-dictatorship timeline (the three films are set respectively in the ’70s, ’80s, and ’90s) and in opposition to a patriarchy that always, finally remains entrenched despite their (often unconscious) best efforts.

These films are small, intimate and, in their way, perfect: Zama is considerably larger and, by its more dispersed and sprawling nature, harder to characterize as flawless. Where a cynic might see the director’s shift into lavish literary adaptation mode as evidence of her own careerist (even Zama-like) aspirations, it seems more that she’s retrospectively attempting to create a fuller and more detailed context for her earlier work; we’re still very much in the Martel Cinematic Universe. Her selection of Benedetto’s initially obscure and only recently canonized novel, which was analyzed fulsomely earlier this year in The New Yorker by Benjamin Kunkel, as source material provides her ready-made access to a primal scene, when the arrival of Europeans on South American soil created a new ruling class steeped in racist attitudes towards the indigenous population. Viewed this way, Zama expands even more broadly into an auteurist-slash-national creation myth, setting up the “Salta trilogy” historically while also operating in a more mysterious and ineffable register of eternal recurrence.

It’s this latter novelty, of a period piece that also signifies outside of its painstakingly evoked time and place, that made me think, almost from the first frame, of Barry Lyndon (1975), another 18th century tale about a military man’s self-serving dreams of upward mobility—and, like pretty much all of Stanley Kubrick’s films, a cautionary tale about masculine arrogance and insecurity bumping up against the brick wall of mortality. There is little correspondence between Kubrick’s master-shot grandiloquence and Martel’s clustered, cluttered close-ups, but both filmmakers use bodies sculpturally, arranging them in patterns that cleverly illustrate—and comment on—power dynamics. The servile, attentive postures of the dark-skinned servants in Zama’s employ amusingly serve to play up his frustration as much, if not more, than his privilege, and there’s something ingenious about Martel’s use of stillness in these scenes, which never quite harden into friezes because of how attuned the camera and soundtrack are to the smallest gradations of movement and sound. The feeling of people holding themselves in place—of struggling against the natural release of breath and sprawl of limbs—is palpable, and serves to make the snail’s pace of events all the more punishing, especially for Zama, whose bridling impatience is conveyed by Cacho with expert comic resignation.

What makes Zama a Kubrickian figure is that he’s driven primarily by a fear of failure and humiliation. In a superb, far-ranging interview with Jose Teodoro for Film Comment, Martel says that what interested her about Benedetto’s character was his inability to go with the flow: “If he surrendered his existence to his surroundings, he’d be much less dissatisfied.” The comic irony of Zama is that a man who embodies the occupying mentality of colonialism is desperate to escape the very land that he’s appropriated. Whether Zama’s refusal to accept his surroundings as home is rooted in guilt, denial, or a deluded belief that he deserves something better, it drives him to try and demonstrate his heroism by turning into an adventurer, an inversion of Barry Lyndon, which begins with Barry as a soldier of fortune before marrying him directly into the aristocracy. (Zama has eyes for a blue-blooded temptress played by Lola Dueñas, but there’s never any chance of him possessing her—she exists only as a foil to his grasping inadequacy).

Zama’s second half swaps out stasis for spaciousness without severing any thematic threads; the severe dislocation and dissonance in the film’s home stretch is intentional and scrupulously controlled. The striking, borderline-surreal tone of these later passages, which jump around in time and space (another Kubrickian move) and burst with action and color in ways that deliberately rebuke the drab immobility of the beginning, emerges naturally out of the situation rather than feeling mandated or imposed. Volunteering to join an army brigade pursuing the mysterious, and seemingly deathless, revolutionary Vicuña Porto, who moves under cover of night through the jungles ringing the colonial outposts, Zama supplies himself with the escape plan that his superiors won’t sign off on, but also puts himself in the sort of danger that his purgatory could never entail.

It’s hardly a spoiler to say that the pursuit of Vicuña Porto, an obvious cipher whose larger-than-life reputation mocks Zama’s own lack of importance, is futile, or that the group’s venture is doomed, or that the images of armed, uniformed men being ambushed and brutalized in the jungle by a group of body-painted natives (a serenely terrifying set piece) are tinged with a sense of retribution against the initial Spanish incursion. But Martel’s vision is more acute than simple, politically correct vengeance—or even necessarily punishment for Zama himself, whose violent physical diminishment (which raises the stakes on Barry Lyndon’s symbolic castration) is framed potentially as a prelude to transcendence. In its closing shots, Zama takes on a strange and overpowering sense of liberation, wryly mirroring the submerged fade-out of The Holy Girl and finally granting its protagonist emancipation, even if it’s not really on his terms. That the method of Zama’s conveyance sends him drifting into the unknown, rather than toward any sort of known earthly reward, can be taken for profundity or a punchline. Either way, the tender surrender of the trajectory feels just right. In the end, Zama is reduced (or redeemed) as a sightseer, and so are we—and to see through the eyes of Lucrecia Martel is to submit to truly lucid dreaming.