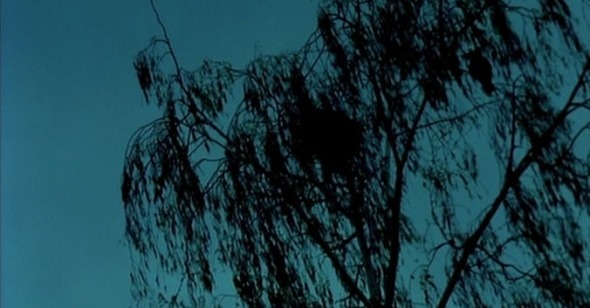 Journey to the End of the World
by Michael Joshua Rowin

In taking war as the starting point of investigation (again) in his latest film, legendary director Jean-Luc Godard has created an emotionally devastating, if not politically incisive, work of art. Notre musique has been viewed as Godard's attempt to operate in a slightly different vein-in terms of structure, tone, and character, but it also points to the same rift that has existed in his films since the late seventies, when Godard largely abandoned Marxist tactics and entered a more “poetic” phase in his filmmaking. Namely, that rift is between overarching themes and moods, and the particular evidence-since Godard is so fond of comparing himself to a scientist-these themes and moods are based upon. Godard's last feature, In Praise of Love, is sumptuous, melancholic, and searching in its treatise on love and historical memory. But when Godard shoots fish in a barrel by using the film as a weak, pointless attack on American culture generally and Spielberg specifically, the foundation of such visual poetics becomes questionable.

However much it fails in its particular points about Sarajevo, Israel/Palestine, and genocide committed against Native Americans, Notre musique is an improvement on the style Godard has been working in for the last 25-odd years, marking the first time Godard's belief in a fallen world-particularly a fallen world of cinema and the image-fully resonates. Maybe it's too soon to say, but Notre musique strikes one as the culmination of everything Godard has been exploring, with mixed results, in those years: found footage analysis, the effects of war on individual and historical memory, the beauty and terror of the image, the responsibility of art in an age of forgotten genocides. Appropriately, Notre musique is modeled on Dante, with “Kingdom” number one a “Hell” of found footage carnage from newsreel and classic films like Alexander Nevsky and Apocalypse Now. It's a brutal catalogue of mankind's march toward self-destruction, and while Godard partly strays into aestheticization, the clashing piano chords on the soundtrack, the video-produced color saturation, and the rhythmic jolts and rushes of montage concentrate attention on the malleability of the images-their status as representations-as much as the loaded content. This “critical work” of “never discovered . . . historical montage”—as Godard has called the concept behind this editing style-is at its most accessible here, a far cry from the information overload of Histoire(s) du cinema. Granted, the point being made is much more straightforward than anything in that video series, perhaps even simplistic by comparison, but one admires the human voice in which Godard speaks for us mere mortals.

“Purgatory” takes place in present day Sarajevo. The starting point is a literary conference, but it gives way to an interview with Palestinian poet Mahmoud Darwish, a lecture by Uncle Jean-Luc himself, and the picture-taking wanderings of two young Jewish women, Olga (Nade Dieu) and Judith (Sarah Adler), the latter of whom surveys the city's visible signs of war and rebirth. This is Godard's most generous cinema in ages-instead of the didactic, obvious recriminations of In Praise of Love or the impenetrable narrative of Allemagne 90 neuf zéro, the melancholy rendered unfortunately dormant in so many of Godard's later films is fully realized here. Godard's feelings about the role of art in influencing political change have always been extremely ambivalent: Notre musique's characters express the purgatorial state of this second kingdom, earth, partly as the failure of artists to truly comprehend the events they place at the center of their masterpieces. Homer, one says, knew nothing about war, and told stories only to amuse himself.

While the two sides of the Israel-Palestinian conflict are aired, Godard takes it upon himself to provide specific examples of the dynamic between cinematic representation and reality. His “lecture” may be the best of Godard's personal musings since the coffee cup sequence from Two or Three Things I Know About Her. Godard, over a shot of a lone, swinging light bulb, calls cinema “our music,” the light we shine on reality to search and illuminate our surroundings. But he also expresses the lack at the center of this utopian vision: “behind the image lies the void.” Dialectic extends to a global scale. The creation of Israel and the displacement of Palestinians can be seen as a classic example of shot-reverse shot, a thesis of hope and an antithesis of pain creating a synthesis of history. “I is another,” Rimbaud's famous cry of alienation—as well as Nina's cry for help in Vivre sa vie—makes a return in Notre musique as another expression of irreconcilability, as well as an epithet for the similar Jewish women who come to very different conclusions regarding the possibility of peace.

Like so much of late Godard, Notre musique is an aphorism-fest that at times borders on the insufferable, but there are some inserted gems here that lodge in the memory unlike anything from Passion, Prenom Carmen, or In Praise of Love: “There will be total liberty when it's the same to live or die”; “We always talk about the death of God but don't live our lives as if that were the case” (paraphrased). The gloomy eulogizing is justified by an adept handling of matters of war and peace, even if the politics of Bosnia and the Middle East become mere background. Notre musique fails only when one considers the more complex political reality Godard overlooks in order to voice complaints about the state of the world. Ultimately, it's difficult to discern if Notre musique truly has as much to say about these conflicts as it does about art and the innate compacity for human cruelty.

In a way, one of Godard's aphorisms comes back to bite him: “We parade victims in order to make us feel better about the oppression we perpetrate.” At the end of the second Kingdom, Godard learns the news of Olga's suicide in an Israeli movie theater, where she calls upon anybody who wants to die for peace to join her. In the third Kingdom, “Paradise,” Olga finds a sun-drenched forest and lake, populated by young idealists protected by American soldiers-Godard's vision of heaven, unsurprisingly, doesn't lack a military presence (imperial forces are, indeed, everywhere). But then, there's no fighting, and Olga's tranquil walk through this pastoral landscape compliments the initial Hell of endless visual mayhem. In other late films like Hail Mary and Prenom Carmen, Godard cuts to shots of nature (sea, moon, grassy plains, sky) to evoke the mystery of the cosmos, to humble his stories and characters. Here, the tone is different: while undeniably strange, this could be a sight realizable on the earth. Funny how, when a fallen world renders peace an impossibility, martyrdom becomes the only option.

At Cannes this year Chantal Akerman stated that Notre musique was anti-Semitic, a startling accusation by somebody initially inspired by Godard's films. But “Paradise” gives the impression, more than ever, that Godard's politics are now deeply influenced by a sort of skeptical messianism. It's understandable how such bitter longing for a pre-Fall world, when aimed in a certain direction (in this case the Israelis), can get mistaken for hatred. Certainly, such dramatic religious overtones (inseparable from Godard's later work) dampen political analysis. The question remains as to how these overtones so devastatingly enter into this film. He may be loathe to admit it, and it may belie Notre musique's often insightful dialectics, but it's quite possible that in Godard's films emotion trumps any pretensions of scientific inquiry.