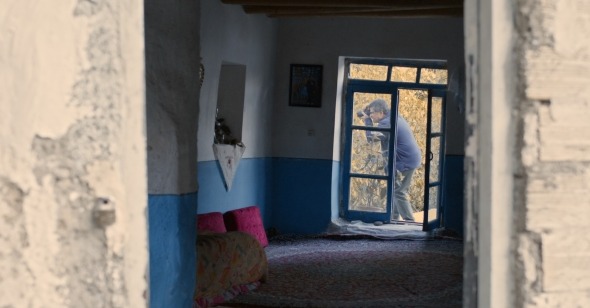 The Man with a Movie Camera
By Farihah Zaman

Just more than halfway through the 20-year filmmaking and travel ban imposed on him by the Iranian government, Jafar Panahi has famously‚Äîand miraculously‚Äîspirited film after film out of the country. These are works that elliptically address living under a violent and oppressive regime without being reduced to or defined by them. Each is a message in a bottle to the outside world during a moment when the so-called Islamic Republic of Iran is attempting to isolate its people and hide the abuses toward them by restricting freedom of expression and the press, as well as controlling access to the internet. Panahi‚Äôs body of work in this era of confinement (including This Is Not a Film, Closed Curtain, and Taxi) presents one of the most elegant and ingenious contemporary examples of art as an act of political resistance. His latest thoughtful docu-fiction hybrid, No Bears, is deceptively gentle, initially even comedic, lulling with a ruminative pastoral quality that is gradually pierced by painful reminders that these are more than stories‚Äîthey are the contours of people‚Äôs lives.

No Bears concerns two pairs of lovers connected through some version of the well-known Iranian filmmaker Jafar Panahi (played by none other than Jafar Panahi). The film opens in a small town in Turkey, where married couple Zara (Mina Kavani) and Bakhtiar (Bhaktiyar Panjeei), are biding their time after experiencing persecution in Iran, their home country, and find they may have an opportunity to move on to Europe and greater safety; the catch is that Zara‚Äôs false documents have come through and she is unwilling to go ahead without Bakhtiar. Suddenly, an intense discussion about their future is interrupted by Panahi‚Äôs voice, asking questions about the blocking of the scene. It seems he is there behind a camera . . . until the frame pulls back to reveal him sitting in a rented room in a small mountain town at the Iranian-Turkish border, directing his actors by Zoom.

This surprising little journey, stepping through three different perceptions of space in the span of a few minutes, sets the tone for the rest of the film, a confident shapeshifter that moves from one modality to the next, dark and light, comedy and tragedy. This bit of artifice adds to the emotional impact of the film and creates a sense of urgency. With some filmmakers this approach might feel like mere sleight of hand, but here the movement between spaces and stories creates an opening for deeper engagement. The film‚Äôs beginning also creates a sense of disorientation around place and propriety, a reminder of the complexity of borders, traversed so easily in the collapsed space of the internet and manipulation of time that occurs in cinema, yet a dauntingly firm barrier to someone living under a travel ban. The line between Turkey and Iran is essentially imaginary and yet Panahi is irresistibly drawn to it, and the lure of any increased proximity to his actors, so much so that he remains in the small town even as challenges begin to mount‚Äînamely the lack of strong internet, suspected police surveillance, and sudden entanglement in a town scandal. The latter involves the plight of the film's second pair of lovers, Gozal (Darya Alei) and Solduz (Amir Devari), residents of the border town and therefore the "real world" as it is delineated in No Bears. They are being prevented from marrying because of an old tradition that assigns a girl‚Äôs future husband at birth. Gozal will be forced to marry another man in the village, who himself was prevented from marrying the woman he truly loved.

No Bears begins with a gentle pace and tone, but the alarming outside world gradually seeps in. The simmering tension speaks to a frightening reality; in one way or another all of the characters/participants in the film have their lives irreparably damaged by a relentless adherence to rules, whether it be incarceration for one‚Äôs political beliefs or a tyranny of sexism hiding behind cultural traditions. Each person in this film is denied full autonomy over their lives and even their bodies. Zara and Bakhtiar fall apart under the stress of their situation and the magnifying glass Panahi has unwittingly applied to it. The players in the village love triangle are not free to marry whom they choose, resulting in irrevocable turmoil. Some of the film's most humorous moments show Panahi‚Äôs gobsmacked expression as he is drawn deeper and deeper into a tangled web of unfamiliar village customs, a Monsieur Hulot-meets-Larry David who keeps putting his foot in it and is slowly worn out by absurdity and chaos. Panahi is able to skewer what his screen counterpart considers maddeningly old-world rituals without condescension, because his own rituals‚Äîdocumentation, image, and art making‚Äîare shown to be equally full of superstition, and frequently driven by emotion. This is what has led him into his risky position by the border, and greatly impacted the paths of Zara, Bakhtiar, Gozal, and Solduz.

The circumstances of Panahi‚Äôs life have continued to shift over the twelve years since the filmmaking ban, and that change has only accelerated during the making and release of No Bears. Since production, the director was imprisoned in service of a previously unenforced six-year sentence for supporting 2010 protests and on charges of ‚Äúpropaganda against the regime.‚Äù He had to learn from behind bars that his latest film won the Special Jury Prize at the Venice Film Festival where it premiered in September 2022. Shortly after that, there was a nationwide feminist uprising in the wake of the murder of Zhina Mahsa Amini (who went by ‚ÄúMahsa‚Äù only because Kurdish names are banned by the Iranian government). The crackdown by the authorities continues to be unfathomably brutal, with firsthand accounts of adolescent activists disappeared, bodies returned to their families with their faces smashed.

Panahi has long focused on the struggles of women under the Republic, in films like Offside, The Circle, and 3 Faces. For a film dealing broadly with oppression, No Bears, too, shows quietly but clearly how Zara and Gozal are particularly at the mercy of existing power structures that still favor the opinions and desires of men. Panahi is the center point of No Bears, the person who connects the two major storylines and whose perspective we enter this world through. Rather than overpower the women in the film, however, this underscores Zara and Gozal's conspicuous absence from the discussions and actions that will determine their futures. Gozal lives in a world in which her community takes more stock in a marriage arranged before she has the ability to consent than her wishes as an adult woman. Every aspect of her romantic life is dissected by a gaggle of self-serious men, in meeting halls and tea parlors and living rooms that she will never be invited into‚Äîeven Panahi, a stranger in town, is more involved in the discussion than she is. Meanwhile, Zara says from the beginning that she is unwilling to travel without Bakhtiar, but he still attempts to make the decision on her behalf, handling deals with a smuggler she has not asked him to make. For all his love and good intentions for Zara, this essentially amounts to more conversations between men about her life.

At this point in his career, attention should be paid to Panahi‚Äôs transition to acting in his films, a practical solution arising from his own personal lockdown, maybe, but one that has resulted in new layers to his work. His ever growing talent in this arena can be overlooked because of his naturalistic style, and perhaps there‚Äôs an assumption that it doesn‚Äôt take much to play a version of oneself. Yet it‚Äôs a task that causes many to turn wooden, instinctively protective of what they might reveal (think of an allegedly candid Beyonc√© in her self-directed documentaries, poised and polished to the last drop). Panahi is always surprisingly vulnerable, and he brings a quiet sense of immediacy to his scenes. At times this creates an unexpected window for humor, a bit of winking self-deprecation, as when Panahi insists that the man whose house he is staying in‚Äîvery much not of the film world‚Äîtake the camera and film a local marital rite that Panahi is too uncomfortable to attend, then immediately goes into a professorial mode critiquing the good-natured man‚Äôs camerawork. In some moments his own presence in the film heightens the stakes: when his assistant director takes him on a night drive towards the Turkish border and urges him to cross over and visit the set, I felt keenly aware of the fear in his eyes, and also how Panahi has aged in his illicit films over the course of these twelve years‚Äîhis hair tinged with a little more silver, his demeanor a little more fragile than it was in This Is Not a Film.

Watching a version of Panahi contemplate the risks of crossing a border in order to make his art, hovering between the reality and the closely aligned fiction of his life, I thought of the Panahi of this universe, sitting in a jail cell at that very moment, tragically less free, even, than his Iran-bound counterpart in No Bears. Yet as vulnerable as he is at the hands of his government, Panahi also continues to apply the lessons he has learned back on himself, interrogating his own responsibilities as a filmmaker in a way that goes far beyond the ability to lightheartedly poke fun at his exacting expectations from a grudging amateur cinematographer. At the climax of the film, Zara breaks character to address the director directly into his camera‚Äîwith her contact lenses and wig she looks like the girl in the picture in her fake passport. She asks, with plaintive fury, why he thinks he has a right to the truth of her and Bakhtiar‚Äôs lives when everything around them feels false.

By depicting himself on the receiving end of the most difficult questions‚Äîquestions he appears to have no answers for‚ÄîPanahi lays bare his conflicted feelings, about the value of his work in an environment of such extreme suffering, about holding some small position of power when he is so often rendered powerless, and in doing so he heightens the film‚Äôs value and emotional impact all the more. Like so many moments in No Bears, this crucial confrontation is fleeting, the film definitively shifting into a new mode with only a sense of unease to carry forward. In a film that also deals in reconciling with the past, these tonal shifts mark a kind of mourning, a constant loss of everything that came before. Women like Zara have little choice but to endure such loss.