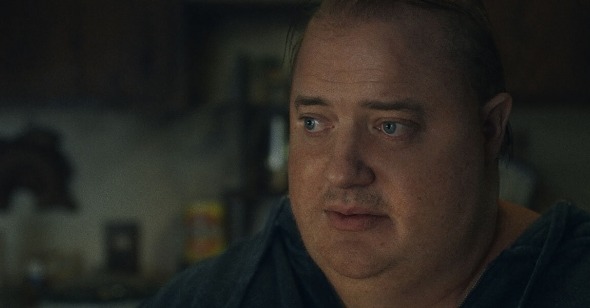 When watching a stage production, the audience must adhere to a particular physical perspective. It isn’t like film, where each shot is distinctly composed to direct the gaze, but instead an intimately crafted single space that allows viewers to take in whatever they please. In Samuel D. Hunter’s The Whale, the playwright sets the stage sparsely: “The main room of a small, white-walled, desolate apartment in a cheaply constructed two-story building. The room is dominated by a large couch that sags in the middle, reenforced by several cinder blocks. Within arm’s reach of the couch are a small computer desk on rollers with a laptop, a large pile of papers, a claw for reaching, and a whole universe of full, empty, and half-empty food containers […] Little effort has been made to clean up trash or organize.”

Though the stage is described without its protagonist in the center, his presence is always known because of the scenario. Charlie is a 600-pound man with nowhere to go but the confines of his shitty apartment. He has been eating himself to death since his partner died, and all he has to show for this period of his life is an essay about Moby-Dick he reads aloud to calm himself and a cavalcade of folks coming in to speak to (and often yell at) him about his size. The play never leaves this space, with all the action happening within this living room, but no one can describe what Charlie is doing as living, be they viewer or character.

In adapting this chamber piece to film, Darren Aronofsky doesn’t let the constraints of the space limit him, directing the camera to aimlessly bounce from actor to actor within this dull coffin Charlie has dug for himself. But he also imposes a new constraint on both himself and Charlie by tightening the frame to 1.33:1, which, in case it isn’t glaringly obvious, is so that the viewer is always reminded of how much space he takes up within his world. It’s one of a dozen subtly offensive decisions in a film that presents itself as empathetic towards its protagonist but has little interest in navigating the murky terrain of what it means to exist as a fat, queer person in a world that loathes you.

The title serves as three things at once: a winking nod towards its fat, recluse protagonist; a reference to Jonah’s plight in The Bible; and a precursor to the recurring citations of Moby-Dick in the text. Charlie will, rather shamelessly, discuss all these things at some point or another in Hunter’s play, as he sits on his couch trying to make amends with everyone in his life while ignoring his impending doom. Charlie has had a heart attack and is slowly but surely riding it out until his death, with the film taking place over the last week of his life.

As expected, The Whale is about what so many works about death are about: the desperate grasp for redemption. But where the best of these are interested in dissecting a certain flawed humanism, Aronofsky and Hunter offer flat portraiture. Characters are less real human beings than thinly drawn sketches: the angelic dying queer, the harpy of an ex-wife, the obscene teenager, the meek missionary, and the saintly person of color who can barely handle the weight of this situation. Though each is played by a capable performer—Brendan Fraser, Samantha Morton, Sadie Sink, Ty Simpkins, and Hong Chau respectively—Aronofsky rarely allows them to showcase any of that talent beyond hysterics and weepiness, fixating more on the nihilism that has defined such films as Requiem for a Dream and mother!

There is power in the quiet moments—of a head on someone’s chest or a defeated whisper—but so much of Hunter’s text relies on shallow analysis and verbal textual explanation (often yelled at both audience and Charlie). His dialogue is less conversational and more a means of exposition, each revelation being framed as a shocking new way to understand characters who have no real lives outside of this singular moment. Aronofsky’s attempt at empathy by foregrounding Charlie in most of the film does nothing to tone down this exhausting obviousness, with practically every shot emphasizing Charlie’s weight in some capacity. It’s particularly noticeable in the way eating is framed as horror, almost akin to how the filmmaker presented drugs in Requiem for a Dream. No doubt the frequently gawking way the camera presents Charlie is intentional and designed for the audience to react with a mixture of disgust and pity, while the overbearing score telegraphs every beat.

To be fair to Hunter’s play, there’s a lot within the text itself that invites serious discussion, particularly in the intersection of religion and queerness. The mere concept of a fat, queer man hiding behind a laptop, essentially closeting himself from his students and the world, is rich and worth exploration, as is that of his deceased partner losing his life under the weight of religious and familial baggage. A filmmaker whose work was built on exploring the nuances of that intersection, like Stephen Cone or Terence Davies, might have done justice to the material by painting these people as more than their respective tragedies. Everything in Aronofsky’s version is a broad declaration, down to the constant cuts back to the television, reminding us of how bad conservatives were during election season (a misguided decision that actively removes the 21st-century timelessness of its setting).

Aronofsky and Hunter aren’t especially interested in sexuality, with queerness both used as a weapon (with Charlie’s daughter actively calling him a faggot, without the film bothering to interrogate how or why she brandishes the loaded word) and a means of laughter, with its most glaring instance being that Charlie is shown jacking off to gay porn when he has his heart attack (and Aronofsky, bless his heart, shows badly cropped pornography with no nudity). The film, of course, wants to assure the viewer that it would never judge Charlie for being a homosexual or fat, while constantly reminding you that these aspects of his life make him a burden to everyone around him. It wants to wallow in grotesquerie without being judgmental about its protagonist. But isn’t pity its own form of judgment?

Everything about the work, from dialogue to style, begs you to understand that Charlie is a Good Man whose past errors, whether of his own doing or brought on by exterior forces like the Church of Latter-Day Saints, matter not in the face of his end-of-life goodness. Much has been made of Fraser’s performance, but there’s no life to what he does here, performing what’s on the page without lending Charlie any interiority. It’s all wide-eyed, empty gazes and voice-cracking delivery to remind you to feel something for him. He’s the most unreal character in a work that begs to be considered authentic and meaningful; a punching bag about to burst from being knocked around too much.

He is framed as a Christlike figure, always turning the cheek while being berated: for being a father who was never really there, for being a patient who doesn’t care about his health, for being a man who left his wife for another man. And his temperance comes in direct contrast with the rest of the film’s explicit references and metaphors. Is he Jonah or The Whale? Is he Moby-Dick or Ahab? As much as the text would like to avoid outright calling Charlie a whale—unless his size is weaponized as an insult by a character— Charlie inevitably is the whale in these situations. He is the Moby-Dick to everyone’s Ahab, each one desperate for him to mean something more than what he truly is. He is the whale to everyone’s Jonah, a being sent by God to save them from themselves in the face of their own foolishness.

Everything that Charlie stands for is a product of someone else’s imagination and projection, down to the very audience that expects this story to play out like an episode of My 600 lb. Life. There is no chance for anyone, character or viewer, to understand anything that Charlie goes through, because Charlie is rarely allowed to speak for himself. While this is a common enough situation for any fat person—being spoken over by doctors, friends, and strangers becoming the norm for merely existing—The Whale doesn’t seem interested in any of the grief or regret Charlie navigates unless it serves as a pallid defense from criticism. Again, it’s less about realism and more about changing minds, doing so with all the grace of slipping on a banana peel.

The Whale, both as a play and film, prompts a worthwhile question: at what point does sincere intention become dominated by the reactions and craft of those who both create and ingest any given work of art? It is a work that positions itself as about meaning and connection, of finding the beauty in the minutiae of life (like an essay written by a child that offers comfort), but it has no interest in the humans it features. Aronofsky offers empty symbolism, without any of the spectacle that made the filmmaker’s past works at the very least engaging in their idiocy (with mother!’s absurd and loose retelling of The Bible in its entirety one of the most outright entertaining). The film, just like the play, only means something if the audience projects enough of their own loathing and inadequacies onto it.