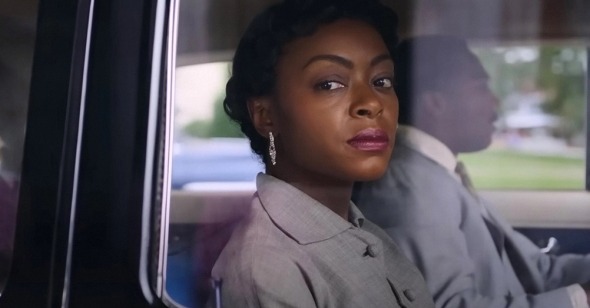 Looking
By A. G. Sims

When 14-year-old Emmett Till was brutally murdered in the summer of 1955, his mother Mamie Till-Mobley, overcome with grief, had a moment of profound insight. After seeing how badly his body had been beaten by his white attackers in Mississippi, she invited Jet magazine and the photographer David Jackson to take pictures so that the world would see the terror that was happening in the South. During this time, in the North, urban areas like Chicago, where Mamie lived, and Harlem were thriving with Black contributions to culture and the arts. But being Black in the American South was still dangerous, and the horrors of the experience didn‚Äôt receive a lot of publicity or coverage. Dragging these acts into the light in the way that Mamie did was novel and helped to galvanize the Civil Rights Movement. In Till, Chinonye Chukwu, who directed the 2019 film Clemency, tells Mamie‚Äôs story‚Äîher journey from Chicago to Mississippi where she testified in the trial against the men who killed her son. By envisioning the story from his mother‚Äôs eyes, Chukwu forces the audience to engage on a deeper level with the enduring tragedy of what happened to Till, and to see his murder not as something singular, but rather as an emblem of the racial injustice that has touched generations of Black Americans.

Chukwu starts the film with scenes that depict the loving bond Till (Jalyn Hall), an only child, had with his mother (Danielle Deadwyler from The Harder They Fall). He sings to her in the car, and they dance to his favorite record in his room. But Mamie moves through these scenes like a ghost. She‚Äôs nervous about a trip he‚Äôs getting ready to take to visit his cousins in Mississippi, warning him, ‚ÄúThey have a different set of rules for Negroes down there.‚Äù She looks on with worry as he downplays her concerns. A prickly score by Abel Korzeniowski lends this prologue a sense of foreboding. When Till finally boards the train and heads south, Chukwu visualizes his journey like a trip into the Twilight Zone. The train hums through a tunnel with a bright light at the end that gets bigger and bigger before it swallows him up. After the train reaches the other side, reality immediately changes for Till and the other Black passengers. He‚Äôs directed to move to the back of the train. Chukwu uses moments like these to highlight the difference between the world Till is coming from and the one he‚Äôs going to. When he arrives in Mississippi, the dissonance of Black experience between the North and the South extends to the family farm where he‚Äôs staying. While his cousins pick cotton, he plays cheerfully in the field, unaware that his bubbly, childlike personality could get them into trouble. One evening they go to a store, and while his cousins are playing cards outside, Till goes in to get a piece of gum. On his way out, he stops in the doorway and whistles at the white woman he had been casually chatting up behind the counter. Later that night, he‚Äôs kidnapped from his grandfather‚Äôs house and taken to a barn. Chukwu elects to shoot the barn scene from the outside. A sliver of light can be seen coming through the doorway, but the violence of the murder that follows, happens off-screen. Chukwu has described this as a deliberate choice to center the loving relationship between Till and his mother above what happened to him.

When word reaches Chicago that Till was taken from the farm in the middle of the night, a family member connects Mamie with an NAACP attorney, Mr. Mooty (Kevin Carroll), who places Till‚Äôs murder in context with the recent lynching of voting rights activist Lamar Smith and others. The NAACP thought that the momentum surrounding Emmett‚Äôs disappearance could be used to call for anti-lynching legislation. Chukwu builds tension around the relationship between Mamie and Mooty, showing the emotional demands of this activism and how it relied on people like her having the courage to share their stories and become a face of the fight for justice. Shortly after the reports have been published about his kidnapping, Till is found dead, and Mamie is called to identify the body. Chukwu depicts the scene sensitively, with slow camera movements and without a musical score. The camera, pointed at Mamie, descends slowly toward the body until you finally see what she sees‚ÄîTill‚Äôs body, swollen and disfigured beyond recognition. Mamie is clearly heartbroken, but notably doesn‚Äôt recoil. She asks to be left alone in the room and observes his body with love and care, touching his ankles and his legs, up to his face. In what could have been a more jarring scene, Chukwu allows the audience to view Till, even in death, from the gentle perspective of his mother, privileging her gaze over that of his perpetrators.

After this viewing, and the photography she allowed, Mamie calls for an open casket funeral so the world can also bear witness. Two men are indicted as part of the lynching party. Though they weren‚Äôt expected to be convicted, the Jet article and photos contributed to a great deal of publicity around the trial. From there, the movie unfolds as a court procedural, stopping just short of delivering the final verdict, which is too predictable to need scripting: the two defendants, who admitted to taking Till from his grandfather‚Äôs house, were ultimately acquitted of all charges by an all-white jury.

Deadwyler‚Äôs performance is the propelling force of Till. In many ways, the movie hits the narrative beats of what you‚Äôd expect from a historical drama, with the glossy cinematography of traditional Hollywood cinema. Scenes with Till and Mamie in Chicago are lit brightly to underscore their reverie before disaster. And in the aftermath of his death, as Mamie becomes more empowered in her activism, she‚Äôs often shot in tight close-ups looking regal and resolute. This is especially notable in a later courtroom scene, in which Mamie testifies. When questioned by the prosecution, in a wrenching monologue, she details how she tried to instill subservience in her son for his safety on his trip south and instructed him to be deferential to white people and to make himself smaller‚Äîeven kneeling if he has to. It‚Äôs a powerful scene, with the camera pointed slightly upward, visually elevating her and, in essence, her message. Throughout the film, Deadwyler is transcendent in capturing the unimaginable position Mamie was in, burying her only child and deciding to share that tragedy with the world.

What Deadwyler perhaps achieves most impressively in her portrayal, which she has said is drawn primarily from Mamie‚Äôs memoir, but also archival footage and photographs, is to conjure a feeling beyond the image, of Mamie‚Äôs suffering and maternal strength, without turning her into a folk hero. By her final speech, we understand that everything that came after Till‚Äôs death‚Äîher activism and work with the NAACP‚Äîwas a direct result of having lived through extreme tragedy and ensuring her son would not die in anonymity. It was only this year, on March 29, 2022, that President Biden signed the ‚ÄúEmmett Till Antilynching Act‚Äù into law, which 67 years after the death of its namesake, finally made lynching a federal hate crime. The film‚Äôs timing is a poignant reminder of the political and legal hurdles at the center of both the movie and the Movement for Civil Rights, to pass legislation that protects Black Americans and creates legal consequences for racial terrorism. Chukwu‚Äôs decision to highlight the impact of a Black woman in this movement is refreshing, as the experiences of Black women haven‚Äôt been traditionally centered.

In movies that depict the gravest tragedies in Black history, there‚Äôs always the danger of exploiting the tragedy itself. It‚Äôs worth noting that Till began receiving criticism from the moment its trailer first arrived, and it has continued through its official release. Many Black audiences are tired of watching Black people beaten and brutalized on film. It‚Äôs not that people want to censor the realities of history, or shy away from truth, but there‚Äôs skepticism around Hollywood‚Äôs intentions in producing these stories over and over, and a growing awareness that these movies get funded at higher rates than movies that show other types of Black experiences. The importance of ‚Äúbearing witness‚Äù has emerged as the prevailing reason for these films and has bled into their marketing, almost as if to say we all have a responsibility to support them in theaters.

It‚Äôs worth noting, however, that Black people are always witnessing: in recent years, many of the most violent crimes against the humanity of Black people have been documented on phone cameras and posted online, from Oscar Grant III in 2009 to George Floyd in 2020. The dissemination of these videos was necessary, despite their grim nature, but naturally, it has made audiences more skeptical of what appears on-screen. People have questioned who this work is for, suggesting that the omnipresent guilt of white audiences and self-interest of studios propel these narratives, with little care for the humanity of the people they depict. It‚Äôs worth mentioning that Grant‚Äôs story was also made into a film, in Ryan Coogler‚Äôs Fruitvale Station, granting him a life in the public imagination beyond what he was reduced to in the videos published online after his killing. That film is a reminder of the ways in which movies that touch on racism and violence can also humanize. With Till, Chukwu attempts a similar feat, choosing to focus on the most humanizing aspects of this story, to varying degrees of success. But her focus on Mamie and the journey she goes on in her activism seems to more than justify the exploration.