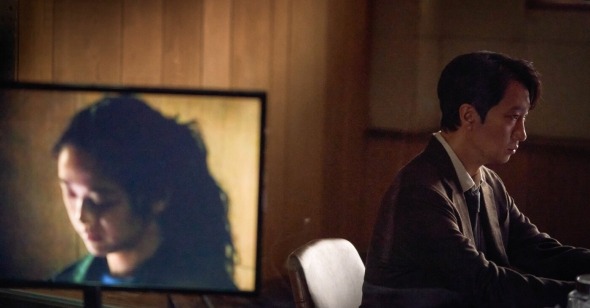 Unworthy of Your Love
By Juan Barquin

Over the years, Park Chan-wook has increasingly become an expert at shifting perspectives, moving between the spectator and the observed with grace and fluidity. Though his Vengeance trilogy, Thirst, and Stoker largely focused on single characters, he moved to more expansive canvases in his erotic thriller The Handmaiden (which used multiple characters to withhold crucial narrative information) and his six-episode TV adaptation of John Le Carré’s espionage thriller The Little Drummer Girl (which expertly juggles a number of characters). Decision to Leave, his latest feature, continues this trend, effectively shifting between its two main characters as they realize how foolishly they’ve been playing their own convoluted wicked game.

At first blush the premise seems simple enough: a detective and suspect falling for each other, with Detective Hae-jun (Park Hae-il) instantly drawn to the mysterious widow Seo-rae (Tang Wei), whom he believes has killed her husband by pushing him off a cliff, despite the evidence overwhelmingly being in her favor. But Park and his frequent collaborator, writer Jeong Seo-kyeong, give the scenario more depth than a typical game of cat-and-mouse.

Seo-rae is a Chinese immigrant suspected of killing her own mother and fleeing to Busan within a shipping container, and her (now dead) husband formerly accepted bribes from illegal immigrants to gain citizenship at his job. Hae-jun is the kind of detective who is exhaustingly determined—losing sleep over unsolved cases and obsessively tracking a criminal who seems just out of reach, stuck in an unfulfilling marriage with a wife who lives in another city, consistently disappointed in the inexperienced cops he’s partnered with—and every thread of Seo-rae’s case draws him in closer: the way dissecting it helps him understand other cases and criminals better, and the precise manner in which Seo-rae performs for the detective. Each longs to deceive the other as much as they want to be ensnared in the other’s grip, but Park and Jeong are more fixated on the slow build that comes with getting to know another person than they are on any one investigation on Hae-jun’s plate of cases.

Each character’s study of the other further obfuscates the line between the professional and personal. It isn’t quite the direct play on Vertigo that it easily could have been, but the film does navigate a similar terrain of both that oft-imitated touchstone and 1964’s Marnie—of an inadequate male trying to fix, and subsequently love, a woman he believes is fractured, all while she attempts to elude his control. For all the beats that will inevitably remind the viewer of Hitchcock, Park is doing something all his own.

As Hae-jun and Seo-rae, Park and Tang both mirror and challenge one another. They have a palpable chemistry that lingers even when the script separates them for extended periods, a believable erotic tension that builds in both silence and conversation. The film evinces a fascination with how people watch and learn from each other, its protagonists trying on different styles of performance: where the bulk of Park Hae-il’s work comes from reacting to the situations he’s thrown into, it’s Tang Wei’s fixation on imitation that’s truly striking. Where Hae-jun barely comes to terms with how his prior history of tainted love mirrors his obsession with a criminal who would do anything to remain with the woman he loves, Seo-rae weaponizes her knowledge of melodramas, studying a variety of tragic romance scenes on television and pulling what she needs from them: the language she’s learning in order to manipulate the men around her.

So much of Decision to Leave and the relationships within reflect upon what we watch and the way we watch, and this concept bleeds into how Park frames most of his scenes. There’s a playfulness to the visuals, which often implicitly question how much a film can truly show within each frame. Sometimes this results in some beautiful layering, with characters staring directly at each other but the audience witnessing their performances through a frame within a frame. Other times it offers remarkable compositions that remove us from a character POV altogether, such as the camera mimicking the perspective of an object being gazed upon, like a dead man’s eye or the inside of a cell phone screen staring right at Hae-jun.

The way we now process information has made us particularly reliant on our digital devices, and Park precisely visualizes the appeal of these modes of interaction. The casual multilingualism of The Handmaiden, which shifted between Korean and Japanese to suggest the tensions of the Japanese occupation of Korea in the 1930s, is maintained in Decision to Leave, which bounces back and forth from Chinese to Korean. Scenes between Hae-jun and Seo-rae that involve a cell phone translation app are among the film’s most dramatic, as when Seo-rae says something in Chinese, without subtitles, and waits for her app to translate and recite it back to Hae-jun in Korean (now with subtitles).

Decision to Leave is ultimately more invested in the tragedy of a doomed romance than the thrills of police procedural. All its threads—from contemplative discussions of what personalities are drawn to mountains versus oceans, to the hapless humor of Hae-jun’s partners in scenes that toy with the conventions of police procedurals and the inadequacy of cops—only exist to enrich the relationship between Hae-jun and Seo-rae. It’s a film that, much like its characters, sets aside reason and prioritizes sensation, diving into all the nonsensical ways that love and hate overlap. Its sensuality isn’t built on sex, or even any explicit eroticism, but in how it constantly keeps any fulfillment that Hae-jun and Seo-rae might long for just outside their reach.

For Hae-jun, life is an endless series of unsolved cases, of sleepless nights, of haunting photographs, and now of trying to find the answer to why he’s become so fixated on this woman. For Seo-rae, life is only worth living when she’s playing some kind of elaborate game. And Park, much like Seo-rae, knows how to bury his secrets, leaving the viewer as hopelessly obsessed with the past as Hae-jun. Their collision, their romance, and the tragedy that surrounds them no matter how much they try to escape it, makes for the kind of enrapturing storytelling worth obsessing over.