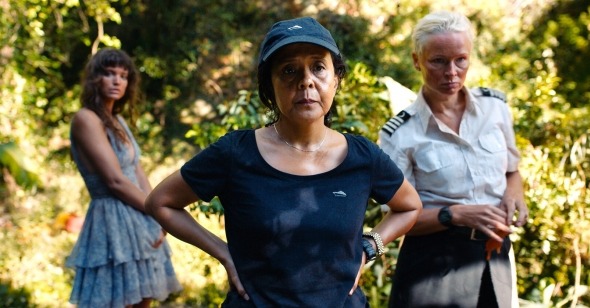 Drifting Away
By A. G. Sims

Ruben √Ėstlund‚Äôs Triangle of Sadness, the dark comedy which netted him his second Palme d‚ÄôOr, takes the insular world of fashion as its starting point. Like his other scene-exploring movies, √Ėstlund is mercilessly precise about the contours of this elite subculture, with references to the fashion houses of the moment, depictions of suspect working conditions for models, and the half-hearted gestures toward politics that have become ubiquitous in the corporate universe. In an early scene, models trek down a runway with a vaguely political message emblazoned on the wall behind them (‚ÄúWe‚Äôre All Equal Now. Act Now. Love Now.‚ÄĚ), a callback to the cringy brand activism that emerged in the summer of 2020. References like these ground the movie firmly in the present, perfectly capturing the tonal weirdness of the modern economy. At the root of the problem is, of course, capitalism, and as √Ėstlund transports us from the fashion industry to a glitzy vacation cruise, and later to a desert island, he details the obvious: our systems are inherently self-defeating and defined by exploitation, no matter who‚Äôs at the top of the food chain. Standout performances from Dolly de Leon, Woody Harrelson, Harris Dickinson, and Charlbi Dean (who tragically died in August) lace all this philosophizing into naturalistic, well-acted satire. But √Ėstlund‚Äôs marks‚ÄĒInstagram models, Russian oligarchs, and arms dealers‚ÄĒare easy targets. √Ėstlund‚Äôs talent is for designing pressure cooker situations that put human behavior to the test, but for a movie that aspires to Marxist theory, it never quite achieves revolution.

The movie opens with Carl (Dickinson), a male model, at a casting call. An interviewer moves through the room asking the models questions and prodding them to demonstrate different poses according to the styles of various brands. When he yells out ‚ÄúBalenciaga!‚ÄĚ the group slouches on command with dead-eyed stares, creating an image that could have been pulled directly from the Fall 2022 campaign. Afterwards, Carl has a meeting with casting agents who whisper and frown when he walks. It‚Äôs a cutthroat industry, and Carl‚Äôs not A-list, underscored later when he loses his seat at his girlfriend Yaya‚Äôs fashion show. Later that night, the couple go out for dinner, and an uncomfortable fight breaks out between the two about who will pick up the bill. The argument continues back at the hotel, and in a moment of frustration, Yaya (Dean) pulls cash from her purse and stuffs it down the front of his shirt. Carl fumes and stuffs the cash into the elevator door. Dean, a South African actress and model, skillfully embodies the persona of someone who‚Äôs climbed the social ladder to the point where she no longer has to pay for anything and also doesn‚Äôt expect to be questioned about it‚ÄĒthe heart of Carl‚Äôs dilemma. He knows it‚Äôs not socially appropriate to ask Yaya to pay, but he‚Äôd like her to do so on her own, without prompting because it‚Äôs contributing to an uneven dynamic between them. √Ėstlund seesaws between these perspectives, zooming in on the little battlefields in relationships where proxy wars play out over power and control in ways that cause insecurities to bubble to the surface.

In the next chapter, set on a luxury cruise, a crew leader gets workers pumped to smile and serve the super-rich patrons who are about to arrive. Carl and Yaya are among them, invited because of Yaya‚Äôs influencer status. √Ėstlund, attuned to and curious about class dynamics, satirizes this crowd of elites as vain and insecure, which we see through the eyes of the socially privileged and clueless central couple. The joke that wealth is a sort of sickness or contagion plays out in a variety of sequences. In one, Carl, who earlier declared that he wanted equality in his relationship, demonstrates that he‚Äôs ambivalent toward it when it comes to coexisting with the not so rich. He gets a crew member fired who got Yaya‚Äôs attention by taking off his shirt on the deck. Later, he attempts to seduce his girlfriend by role-playing as a pool boy lusting after his rich boss, the fantasy illuminating something about Carl that will become clearer later‚ÄĒwithin power submission dynamics, there‚Äôs also the potential for desire. However, when submission is required for survival, as the film goes on to show, it‚Äôs dehumanizing‚ÄĒthe bleak reality of the crewmembers, treated with indifference or worse by the wealthy guests. The only person in a position of power on the boat who seems turned off about the whole thing is the Captain, a stand-in for √Ėstlund‚Äôs political POV played by a characteristically funny and nonchalant Woody Harrelson.

At the midpoint, √Ėstlund‚Äôs metaphor about the sickness of the rich becomes literal. A storm hits the ship during the formal ‚ÄúCaptain‚Äôs Dinner,‚ÄĚ making passengers projectile vomit, an extended sequence involving vertigo-inducing camerawork with which the ship appears to rock back and forth. The point of all this, beyond putting the capitalist monsters through hell, seems to be that when push comes to shove, even the richest among us are inescapably human and gross. As the storm rages on, the only people enjoying it are the Captain and a companion who‚Äôs joined him in the dining room to ride it out‚ÄĒa Russian oligarch, who makes his money from selling ‚Äúshit‚ÄĚ as he puts it (he means fertilizer). They get drunk playing cards as the ship rocks and tilts, and eventually start trading quotes about Marxism and capitalism. ‚ÄúThe last capitalist we hang will be the one who sold us the rope,‚ÄĚ the Captain offers, and so on. The jokes pile up, especially about the irony of their juxtapositions‚ÄĒthe ‚ÄúRussian Capitalist and the American Communist‚Ä¶‚ÄĚ‚ÄĒbut never beyond that. The broad humor doesn‚Äôt illuminate anything about the distinctly modern moment √Ėstlund‚Äôs trying to capture. With Instagram models vacationing on yachts with Russian oligarchs, surely there‚Äôs more to mine than vomit and diarrhea, but √Ėstlund is ever the full-speed-ahead entertainer. The ship survives the stormy night, but in a sleight of hand, goes down the next morning, after being struck by a hand grenade, a deus ex machina that, in a CGI'd spectacle, transports us from the cruise ship to the final locale where the rest of the allegory will play out.

Carl and Yaya wash up on a desert island with an ensemble of other survivors‚ÄĒthe Russian capitalist, the crew leader who was earlier hyping up her employees, a disabled woman who can‚Äôt vocalize her needs, and a black crew member whom the Russian immediately accuses of being a pirate. When they see a lifeboat that‚Äôs also washed ashore, they find another survivor, Abigail (a standout performance from De Leon), who had been a member of the ship‚Äôs cleaning crew. She‚Äôs immediately enlisted by the crew leader into rationing the food and water from the lifeboat among the rich because, in her mind, even away from all known civilization everyone reverts to ingrained roles. But this doesn‚Äôt last very long. Later that evening, Abigail catches an octopus with her bare hands, starts a fire, and prepares a restaurant quality dinner for the group. However, she takes half of the meat for herself, shocking the crew leader, who tries to force her to give up the food. Abigail doubles down and asserts that she will be the captain of the island, since everyone‚Äôs survival depends on her. They accept.

But this isn‚Äôt exactly a Marxian worker revolution. Abigail‚Äôs leadership merely reinforces the capitalist hierarchy they had on land, now with her at the top and everyone else playing the role of ordinary laborers. At night, she sleeps in the lifeboat and uses that privilege as an incentive to exploit power and exert social control. After she catches them stealing food, Abigail takes dinner privileges away from Carl and a former crew member. Carl flirts with Abigail, trying to get back in her good graces, and she invites him to sleep with her in the lifeboat, which negatively affects his relationship with Yaya. Carl denies that they will interact romantically, but over time this becomes less plausible as he continues to spend night after night in Abigail‚Äôs boat. Carl sees an opportunity to use his conventional good looks‚ÄĒhis only asset since he lacks any useful survival skills‚ÄĒto climb their island society, and he takes it. In the movie‚Äôs opening, √Ėstlund presents subtle indignities that the fashion industry imposes on male models. But even far from the fashion world where Carl and Yaya made their living, looks still hold currency and bodies are still commodities.

In his films, √Ėstlund frequently explores the social and behavioral instincts of affluent white men from a seemingly self-critical perspective. In Force Majeure (2014), Tomas can‚Äôt confront the truth about his reaction to a near-death collision with an avalanche at a luxury ski resort. When a wall of snow comes pouring down the mountainside during lunch with his family, his fight-or-flight response kicks in and he runs. The dust settles, and he returns to the table, but the damage is done. His wife, Ebba, can‚Äôt stop reliving the moment, enlisting close friends in Tomas‚Äôs humiliation by continuing to share and analyze the incident. When pressed, he can‚Äôt accept the truth, that he lacks some primal (supposedly) male instinct to protect his wife and kids. In The Square (2017), Christian, a museum director, gets an opportunity for heroism when a woman comes running through a public square yelling for help. He and another bystander bravely intercept the man chasing her and de-escalate the situation, leaving Christian walking away with a sense of pride that is crushed moments later when he realizes he was pickpocketed. And in Triangle of Sadness, it‚Äôs Carl who finds his back against the wall, struggling with masculinity‚Äôs performative demands.

When √Ėstlund writes about people and relationships, he focuses on small details. In the relationship-defining fight between Carl and Yaya, they don‚Äôt say anything for a stretch of time, but tight shots show how they communicate what‚Äôs under the surface through body language. √Ėstlund frames Carl with his back close to the wall and his arm on the table inches from the bill. Such framing pulls you into the psyche and emotions of his characters and helps his dissections of relationships feel poignant and incisive. The bill scene and the boat sequence (which involved building a big studio set on a gimbal) give √Ėstlund an opportunity to show off his aesthetic skill and technical mastery. But the movie flattens in its reach for a greater philosophical meaning. Other makers of European art films, like Michael Haneke, with whom √Ėstlund‚Äôs often put in conversation, can cut to the heart of contemporary global issues with icy precision. But ultimately with Triangle of Sadness, √Ėstlund waves off an opportunity to engage with these themes more deeply, in service of pleasing the crowd.