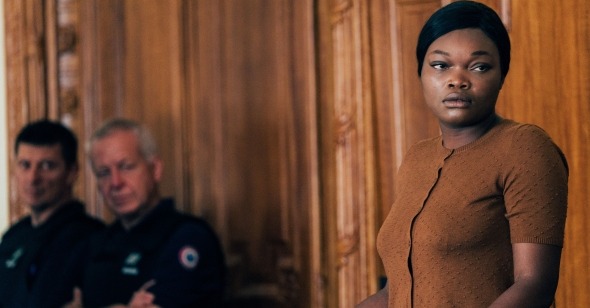 Mother of Sorrows
By Michael Koresky

Laurence Coly takes the stand three times over the course of three days. The Dakar-born woman, who has been living in France since 1998, has been accused of killing her 15-month-old daughter, Lili, discovered by fisherman after having washed ashore in the northern French commune of Berck-sur-Mer. Laurence (played by Guslagie Malanda) has confessed to drowning the child, though she does not admit responsibility, claiming to have been under a kind of “sorcery.” Each of the days she provides testimony in the courtroom, the camera films her from a different angle and distance. In the first, when going into lengthy detail on the basic outline of her life in France and the circumstances that led to the child’s death, she is filmed in a direct, medium shot; she is center frame, seen from the waist up, head slightly turned left to address the judge, off-screen. The second time we hear from Laurence, when she begins by talking about the difficulty of the pregnancy, we are given an entirely different vantage point: she’s closer to the camera, shot from the left side of the courtroom in a medium close-up; her stoic body language, the positioning of her shoulders and chest, convey strength, and because she still glances left, this time her eyes are nearing the camera lens. Finally, when she is asked to recount the day of the child’s death and describe her state of mind, we see her in close-up; as she speaks, she gazes off into the middle distance, somewhere past the camera and the courtroom itself, her eyeline unclear.

Alice Diop’s exquisite, diamond-hard Saint Omer is a film about many things, but one of them is human connection, as both saving grace and impossibility. The exchanges of glances throughout the film—where the camera is, who’s looking, and who’s being looked at, and how that implicates us as viewers—articulate its profundities and complicate its meanings. That we are looking at Laurence is crucial: the film, after all, is not from her point of view—it might not even really be about her, despite the sensational tragedy her story gives to the film’s center. Instead, we are looking at Laurence because she is being looked at by Rama (Kayije Kagame), whose gaze also becomes the viewer’s. Rama, who is likewise a Senegalese French woman, has come to the northern French town of Saint Omer, from Paris, where she lives, writes, and lectures, to witness Laurence Coly’s trial as inspiration for a new book. Like Laurence, Rama’s family is from Senegal and, also like her, there is the sense, not articulated but highly present, of unbelonging in her family’s adopted country. But these women do not know each other. The two women exchange a glance only once, in a climactic moment that puts to shame the dramatic denouements of most other recent films: freighted with history, empathy, and detachment, their look is, like so much of the film, there for our projection, and it’s at once devastating and purposely inscrutable.

Saint Omer is a film of placid exteriors, beneath which rage emotions that are quite literally unspeakable. Why did—how could—Laurence kill her own daughter? A courtroom trial could never truly explain. Near the beginning of the film, Rama is framed in a doorway in her mother’s apartment, and you might notice she’s flanked by a photo of herself as a child on the left and an image of the Mona Lisa on the right. The entire film seems to exist somewhere between these two faces: the as-yet-unformed expression of a child, perhaps unknowing of the world’s sadnesses, and France’s most famous image of a grown woman’s unreadable passivity, an expression so compellingly obscure that millions of people travel to see it every year. The human face’s inability to betray its interiority is a recurring element of the film, but so is the questioning of that very assumption. Is Laurence, for instance, really so unreadable, or are the film’s many Western viewers projecting such inscrutability onto her? Her insistence that she was the victim of sorcery, or a curse, is for her prosecutors, defenders, and judges—all white, all functioning from some baseline of bafflement—the clearest evidence of an unbridgeable cultural divide, giving them an excuse to other her entirely.

At the outset, the judge tells Laurence she “claims to have Western values,” which implies that she doesn’t at all, and that the killing of her child is somehow the result of a lack of those values. This accusation also expresses that her explanations (hallucinations, seen under the duress of an “evil-eye”) are the results of a kind of madness that would be seen as primitivism in Senegal and insanity in “civilized” France. That Laurence’s actions—and their psychological derivation—can never be reconciled or satisfactorily explained is at the heart of Diop’s film. It’s an impossibility that’s expressed in the central, and most heartrending line of dialogue, when Laurence, asked point blank why she killed Lili, responds, “I don’t know. I hope this trial will give me the answer.” Diop has said that this line is based on reality, stated by Fabienne Kanou, a Senegalese woman who did in fact drown her child on a beach in Berck-sur-Mer and blame witchcraft. Like Rama, Diop, also the daughter of Senegalese parents, attended this trial in 2016 with fascination. In Saint Omer, Rama plans to write a book that uses Laurence’s killing as the start of an investigation that brings in the Greek tragedy of Medea—philosophically elevating the story to the realm of myth. As she witnesses the unfolding of the courtroom case, almost surreal in its attempts to put mundane words to things beyond expression, Rama grows visibly torn about her academic attempts to project a literary formulation onto Laurence, while also considering her own troubled relationship with her mother and—as we come to learn late in the film—her fears about her own imminent motherhood.

Just as Diop appears to be employing Rama as a fictional surrogate for herself, Rama wonders whether she might identify with the woman on trial. In addition to similar cultural backgrounds, they have in common a philosophical engagement with the world. A successful author and scholar, Rama is first shown lecturing on Marguerite Duras and female heroism, noting “how the power of her images sublimates reality.” Laurence, who had immigrated to France to get away from a mother she didn’t connect with, says during her trial that she dreamed of becoming a great philosopher, “someone who left her mark on the world.” In one of the film’s more subtly harrowing moments, a white former professor of Laurence’s testifies in court, mentioning Laurence’s curtailed thesis on Wittgenstein and promptly dismissing it, saying it’s a “philosophy not about her.” This finite and exclusionary judgment results in a rare shot of the stoic Laurence nearly collapsing in the witness box before summarily pulling herself back up. In this moment there’s just one more sense that the Western world, with its imagined superiority, has refused her personhood, in this case devaluing her ambition and intellect: her epistemological curiosity to use logic and rationale to define a cruel, indefinable universe.

Perched on the witness stand, wearing a beige shirt that practically disappears into the burnished wood paneling surrounding her, Laurence is at once firmly present and somehow fading away. It’s a visual reflection of her place in French society at large and her treatment at the hands of her erstwhile older lover and Lili’s birth father, Luc (Xavier Maly), who had kept her, and ultimately Lili, a secret from his friends and family. When, at one point, Luc says that lying in bed with her and the baby made him feel like the “happiest man alive,” Diop cuts to Laurence, her eyes subtly closing at the brashness of his lie. Despite the foregrounding of Laurence’s social invisibility, Malanda is a powerhouse; it’s a staggering performance of forbearance that manages to be defiant and remorseful, confused and assured, transcendent and all-too-human—at once and at all times.

Neither Malanda nor Diop allows for a spectacle of grief, which likely makes it all the more emotional for Rama. The film’s most subtly arresting sequence is a stylistically unusual interlude, which culminates in Rama’s quiet breakdown. At one point late in the trial, Laurence’s mother takes the stand, and as she begins to testify (about a daughter who has already stated that her mother doesn’t really know her), Rama averts her eyes from the proceedings and looks out the window. As we see what she sees—a mass of clouds, the side of the courtroom building’s forbidding exterior—the sound fades out and time jumps, the conversations of the trial abstracted into snippets of white lawyers and witnesses debating racial and cultural impasses they are barely equipped to analyze. When Laurence’s confession is read aloud by the judge, the soundtrack goes completely silent; Diop then cuts to Laurence in profile before she slowly turns and, within the sea of stern white faces, looks at Rama (and, as it’s directly into the camera, us). She smiles warmly—perhaps the most heartbreaking thing she can do. The women are connected in this brief passage of time—but how and why? Rama begins to cry, gets up, and leaves the courtroom. All we have to comfort us is the aching threnody of Nina Simone’s “Little Girl Blue.”

Because Alice Diop has until now been an exclusively nonfiction filmmaker (her surprising, elegantly constructed Nous, about ordinary, mostly Black and brown immigrant lives in the Paris banlieues, was released in the U.S. earlier this year), the direct style she employs in the courtroom scenes of Saint Omer might be called simply “observational” or, worse, “artless.” Yet I can’t imagine seeing something more compositionally thought-through and artfully constructed in the current cinema, or something that more compellingly refuses to divulge its secrets while also maintaining a constant engagement with so many legible ideas. Even within the film’s lengthiest durations, Diop is constructing a world in front of the camera that’s so believable as reality one might not notice the subtle brilliance of how that world is being conveyed. Look at the single take she employs at the outset of the trial, during the jury selection, with the camera panning the courtroom patiently—incredulously—as lawyers dismiss or accept jurors with all the apparent intellectual struggle of someone checking off items on a Thanksgiving shopping list.

The first line of dialogue in Saint Omer is “You were calling for your mother.” It’s stated by Rama’s boyfriend, Jean-Claude, waking her up from a dream. The film’s opening image, which we saw directly before this—a close shot, from the side, of a woman walking with a child on a moonlit beach—might have been Rama’s own haunted dream of Laurence Coly, or a flashback to the event itself, or something in between. However we wish to interpret it, the death of Lili unlocks a cascade of anxieties and fears for Rama, about her own relationship with her mother, her identity as a Senegalese woman in France, as an artist, as an intellectual. Throughout, Diop punctuates the film with visions from Rama’s childhood, some of which are captured as authentic-seeming VHS home video footage (reminiscent of Diop’s own home movies shown in Nous), further expressing the spiritual triangulation among the filmmaker and her two characters. These piercing scenes, fuzzy in meaning and memory, are reminders of the complicated relationships we have with those who created us and with those we create—whether real or fictional.