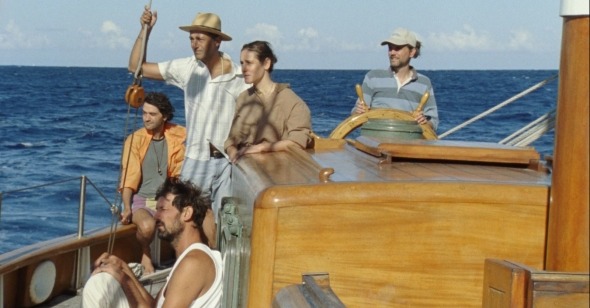 To the Sea
By Forrest Cardamenis

Helena Wittmann’s first feature film, Drift, concludes with a Wavelength homage: the camera slowly zooms in on a photograph affixed to a window. It’s an appropriate conclusion, as the relationship between image and narrative found in Wavelength mirrors that of Drift, with narrative subordinated to time rather than doing the reverse, as narrative filmmaking tends to. In both films, unity of time and space in front of the camera becomes a canvas upon which dramatic activity—in the case of Wavelength, a murder mystery—can take place, but the indexical properties of the image take priority; in no way are the plot events accentuated. If we think of this as a form of minimalism, a derivation of meaning from the inherent properties of a medium or the units (e.g., the shot or the cut) that comprise them, Wittmann’s new film, Human Flowers of Flesh, goes a step further, stripping away all convention or other traditional conveyers of meaning to let these units speak for themselves.

In the film, a woman named Ida (played by Angelidi Papoulia, recognizable from roles in the films of Yorgos Lanthimos and Syllas Tzoumerkas) is the captain of a ship with an all-male, international crew (consisting of the Brazilian Gustavo Jahn, the Portuguese Mauro Soares, the Serbian Vladimir Vulevic, Algeria’s Ferhat Mouhali, and a pair of Germans, Ingo Martens and Steffen Danek). Upon overhearing talk about France’s Foreign Legionnaires while docked in Marseille, she plots a course for Sidi Bel Abbès, Algeria, the organization’s headquarters until the nation’s independence in 1962. Aboard, the crew engages in reading, Go, journaling, or occasional conversation, but mostly they idle away the hours. An 8mm or cyanotype sequence, an underwater shot, images of microscopic life, or elongated views of the ocean sometimes break up the quotidian. As in Drift, “nothing happens,” which is to say that the film challenges our ability to make meaning of what it presents to us.

This mission is signaled foremost in Human Flowers’ use of sound. The crashing of ocean waves is audible nearly without interruption, and the most active sequences sculpt a veritable symphony around it, consisting also of dialogue and gentle, sometimes barely detectable synth tones. There is a long tradition in music, from Pierre Schaeffer and musique concrète to the microsound minimalism of Richard Chartier, of emphasizing the acoustic rather than denotative properties of sound, and the layering here—especially given that much of the dialogue is untranslated—seems to gesture in this direction. Indeed, both sound design and composition are the work of Nika Breithaupt, who makes music (and is credited as “composer”) under the name Nika Son and who has cited musique concrète as an influence. The musical tradition of Breithaupt, whom Wittmann has identified as a key collaborator in each of her features, seeks to divorce the signifier from the signified and to deny the teleological qualities of music. In this tradition, a sound is, foremost, a sound, and a composition is a sequential ordering of them, but not necessarily one that “builds” from the first sound to the last.

This same logic is operative in Human Flowers. The Kuleshov Effect states that the audience will see in a performer the appropriate emotion when presented with the shot of a person looking followed by a shot of something else; for example, a shot of food will cause the audience to see hunger in the face, or, as informed by the visual parlance of Classical Hollywood cinema, a shot of a woman will cause the blank gaze of a man to be interpreted as lust. But what happens if the associations are less clearly delineated? In the absence of obvious alternative signifiers (such as, perhaps, a shared color palette or a graphic match), what do we make of this sequence: a prolonged shot of a man looking out at the sea, a similarly lengthy shot of a snail approaching a plate of fruit before being moved out of frame by an unseen man, a shot of two men playing a game of Go below deck, a glass resting atop a counter, the shadow play of sails or clothing blowing in the wind, a porthole, and a man journaling on the deck? I chose this sequence of shots arbitrarily by dragging the tracker on the film’s online viewing platform, but one could jump to any section of the film, and in almost all cases, the shots would be similarly disconnected. What meaning can we derive from disconnected shots? Can these images—captured on physical, tangible 16mm film—exist solely for their material, textural, sensorial qualities and frustrate attempts to attribute purpose and structure to them.

This question—essentially, can what comes before be severed from the present?—is at the core of Human Flowers’ narrative. It informs what may be Ida’s question, left unstated, as to why the Foreign Legionnaires still exist. But it finds its most compelling exploration in Wittmann’s favorite subject: water.

The metaphorical potential of water is at once remarkable and clichéd. It is a giver and taker of life; it is both tranquil and tempestuous; it is a conduit for travel and connection but also a merciless prison guard dividing the haves from the have-nots. Paradoxically overlooked are its more literal qualities. Water is clear or blue, or even green or brown depending on the light and its purity; it is sometimes silent and still but other times loud and kinetic; it is a liquid, and it can be shallow or deep. It should be noted first that the metaphorical qualities of water are directly connected to its material ones: its depth or shallowness determines its dividing and connecting properties, its color and cleanliness determines whether it gives or takes life, and its movement and stillness determine its temperament. Even more notable, however, is that the foremost property of water, one that we tend to speak of only sarcastically, is that it is wet. Yet it is precisely this property that is the most elusive. It is accessible only through touch, a sense for which the cinema has no recourse. Water, then, especially in the cinema, is a form of matter that can never quite be grasped or mastered. It offers us seemingly infinite cognitive and sensorial pleasures, but it withholds its essence.

Wittmann asks us to listen to and look at water and notice the contingency inherent in its nature. We are witnesses to its evanescence, the way its exact shape or appearance exists for just 1/24th of a second, and for that long only because of the mechanical qualities of the film camera. Like sound, its exists as it does only as it disappears. Water has no teleology, so the more we isolate its material qualities, the more weight it can carry as a signifier of meaning. Human Flowers privileges the sensory and material qualities of water because water-as-matter is what enables water-as-metaphor.

This is Wittmann’s great cinematic coup: she challenges our hermeneutic inclinations by asking us to privilege the material qualities of her sounds and images, but those qualities are themselves rich with meaning. Human Flowers activates our impulse but eludes our ability to make sense of it. When Ida reaches Sidi Bel Abbès, she speaks with a Legionnaire named Galoup played by Denis Levant. Those who have seen Claire Denis’s Beau travail will recognize him as the same character from that film, as if to encourage us to place Human Flowers in conversation with it. Where Beau travail is Billy Budd, a story of mutiny and male bodies, Human Flowers is Moby-Dick, a search for knowledge. That search is made manifest throughout the film, in its sequences of microscopic life or a sunken plane, in the way the characters translate poetry and in the tales they tell of Medusa and the origins of coral or of the Legionnaire itself. By the time Ida has left Galoup and the film has substituted the infinite expanse of the desert for that of the sea, it is clear there are whole worlds still unknown to us. But the beauty is in the search.