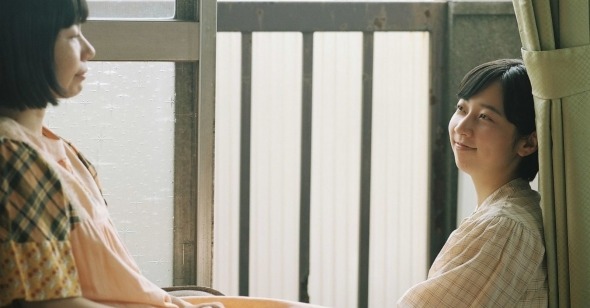 Go with the Flow
By Forrest Cardamenis

What does it mean for a film to be “poetic”? Film scholar Tom Gunning inquired into the vagaries of the term in a 2019 essay titled “The Question of Poetic Cinema,” associating it primarily with 19th and 20th century ideas of lyric poetry. In cinematic terms, that means privileging visual metaphor, composition, and editing ahead of narrative, striving for the “pure” cinematic language analogous to the extreme, heavily phoneticized language of poetry. Gunning goes on to examine these qualities in two dissimilar schools of film: surrealism and the American avant-garde. To these we could add the equally distinct stylized, fatalistic “poetic realism” of 1930s French cinema (typified by L’Atalante) and the visually extravagant, frequently ethnographic Ukrainian poetic cinema of the 1960s (typified by Shadows of Forgotten Ancestors), though countless other films or groups of films have been tagged with the same label over the years.

Kyoshi Sugita’s Haruhara-san’s Recorder is a different kind of poetic cinema, one that takes its inspiration from the Japanese tanka. The tanka is a Japanese poem in five “lines” (although all waka, or Japanese short poems, are traditionally written out continuously) containing, five, seven, five, seven, and seven on, the standard phonetic unit of Japanese poetry (which is much closer to a mora than a syllable). A tanka often includes a kakekotoba, a “hanging word” with multiple meanings that upends a reader’s expectation and shifts focus from an image to a subjective response to that image. Translating poetry is always difficult because meter and rhyme will differ across languages, but Japanese and English are especially dissimilar. Nevertheless, we can grasp the kakekotoba in the Naoko Higashi tanka on which Haruhara-san’s Recorder is based. In an interview with Nathan Letoré at FIDMarseille earlier this year, Sugita himself offered this translation: “Gazing Upon / the Address Unknown stamp / The recorder / Played by Mr Haruhara.” The word “recorder” might initially suggest a camera, especially following the verb “gazing” that opens the poem; the last line, however, reveals that “recorder” also refers to the wind instrument. Even the reader unwilling to accept the ambiguity of “recorder” as imposed by translation will be left with several questions: who is gazing, where was the (presumed) letter sent, who does the recorder belong to, and why is Haruhara playing it?

The pivot from a scene to the individual’s response to that scene is a helpful way to frame Sugita’s quiet, sometimes beguiling film. It is almost devoid of conflict, so viewers must be observant to notice the oblique narratives that emerge around Sachi (Chika Araki). At the start of the film, Sachi takes a job at a café and begins subletting an apartment from a man (revealed much later to be Haruhara) somewhere on the outskirts of Tokyo. She shares meals, tea, and cakes with an aunt and uncle, who frequently check in on her at her new home; she performs small favors for strangers, which are depicted at considerable length; she occasionally rides with her uncle on his motorbike; she prepares for theater auditions and works on calligraphic paintings as part of a local arts community; most mysteriously, she ritualistically writes letters that are returned to sender. There is enough to work with in these events to piece something together: Sachi has recently gone through some concerning life event—it could be a breakup, a death of a loved one, a suicide attempt, or some combination of these—but, as in Higashi’s tanka, the narrative specifics gradually diminish in significance compared to the character’s responses.

Thus, rather than dole out character or narrative information too liberally in dialogue, Sugita uses editing and pacing, especially in exteriors, to help the viewer understand Sachi. He makes extensive use of the sequence shot, and scenes without any clear narrative purpose tend to continue without any legible motivation for surprising lengths of time. In one scene, Sachi is asked by a stranger to take a picture. A full two minutes pass as the stranger pulls the camera out of her backpack, removes her mask, and positions herself in the middle of the quiet street, and then Sachi composes her image and takes the photo, and checks with the stranger for approval. In another scene, Sachi and her uncle begin to walk her aunt to the subway, and just as they embark, Sugita cuts directly to the subway station for a long shot in which the three amble from the background of the image toward the staircase leading underground in the front. They are mostly silent as they walk, but they do not fully arrive and say their goodbyes for a full 90 seconds. Sachi and her uncle peer down the stairs into the station for an additional half-minute, no more talkative than earlier, before Sachi makes a joke and the film cuts away. A quick walk to the train station, a hug goodbye, and then a cut could be comfortably done in 15 seconds, but 15 seconds of screen time would downplay the emotional significance of Sachi’s time with others and the longing feeling we grasp as we watch Sachi watch someone depart.

The duration of these scenes places a heavy burden on the film’s performers. If the events we witness are less meaningful than how Sachi carries herself during them, it means that the actors, and Araki in particular, control the tone and emotional tenor of every scene in the film and therefore the viewer’s ability to mentally track a character arc or piece together a narrative. There are no show-stopping scenes, big blow-ups, or monologues in Haruhara-san’s Recorder, so Araki’s ability to humanize an opaque series of tableaux deservedly won her a Best Actress award at FIDMarseille.

While the film’s exteriors convey meaning largely through rhythm and duration, interiors shift the weight of the hermeneutic process to composition. Meanwhile, in interior shots, images of the outdoors are visible through a window or an open door. This brightness, which threatens to overwhelm the composition despite being relegated to the backgrounds of shots, promises a world more fulfilling than what can be attained in the home, which in turn imbues the subsequent exteriors with import. Sugita also loves to stage interior sequences that play out on multiple planes of action. We frequently witness Sachi move from the foreground to the background to greet a visitor from just inside the threshold of her home, her body blocking the face of the visitor from our view in the same way that the threshold of the door blocks the possibility of a meaningful connection.

These visual metaphors might seem overdetermined or elementary, especially to those who are quick to grok the emotional wavelength of Haruhara-san’s Recorder, but it is worth pausing to consider how economically the film conveys its ideas. Revelation in this film is quiet; for Sachi, it is represented by a gradual transition from being the one who is photographed to the one who takes photographs. There are countless films gesturing toward similar ideas—the daily epiphany, the rewards of emotional investment and companionship, life’s unceasing flow amid tragedy and the therapeutic powers of time, the need to seize the day—that come across as stale, clichéd, or obvious; Haruhara-san’s Recorder is remarkable for how much it simply trusts its aesthetic. It is precisely the modesty of its thematic goals that permit it the ambitiousness of its formal means. Other films may tread similar territory, but this one manages to communicate its ideas by rendering a new kind of poetic cinema.