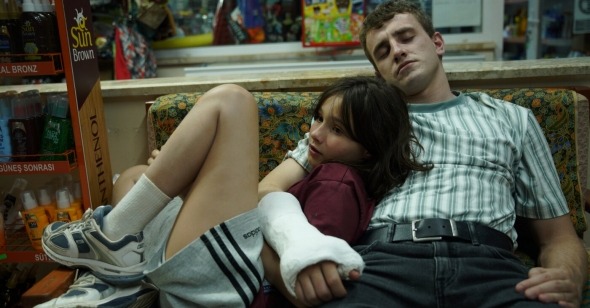 The Nearness of You
By Matthew Eng

Aftersun, the feature debut of the Scottish writer-director Charlotte Wells, comes as close as any film I can recall to giving grief a cinematic form that does not seek to explicate but instead embody its very instability. Grief can mar what we think of as the most joyous and innocent days of our lives and partition whole years into discrete periods of before and after. Grief shows mercy and takes breaks on occasion, though it never announces its inevitable homecoming: you can be drying a plate you forgot was bequeathed to you or driving back from a get-together with one less place set at the table and then, suddenly, grief has your heart in its hold. It pummels you with the memory of a voice, a touch, a warm-blooded presence; it taunts you with the knowledge that you can remember all these things but never return to their source.

A sensation at this year’s Cannes Critics’ Week, Aftersun follows 30-year-old Calum (Paul Mescal) and 11-year-old Sophie (Frankie Corio), a father and daughter on a weeklong summer holiday in a seaside Turkish town in the late nineties. Despite Calum’s paternal penchant for tucking his shirts into his cargo shorts, the pair look like brother and sister—and are mistaken as such by two teenage boys over at a luxe resort where they spend most of the trip, preferring it to their dingier lodgings. Sophie resides with her mother, from whom Calum is separated, in a different city, and there is an impish ease between the reunited duo, but also a creeping sense that one of them is living on borrowed time.

This is a shattered memory piece, in which the events of the vacation are recollected and visualized in the present-day by a now adult Sophie (played in brief flashes by the dancer and choreographer Celia Rowlson-Hall) as she watches mini-DV footage of the trip shot by her late dad on his camcorder. Although Wells lost her own father as a teenager and depicted his death in her 2015 short Tuesday, the New York–based filmmaker has stressed in interviews that Aftersun is a work of emotional rather than factual autobiography. She says she funneled facets of herself into both the alert, precocious Sophie, whose eyes are wide open to the mating rituals of the boys and girls a few years older than her, and the ill-fated Calum, who regards his patriarchal role as more guide than guardian.

Wells’s film is initially difficult to situate in time and place. (Period details accrue steadily, mostly in decade-designating, tourist-friendly needle drops like All Saints’s “Never Ever” and Chumbawamba’s brain-scrambling “Tubthumping.”) The effect of this is that father and daughter are not just the film’s core but its only constant; we latch onto them instantaneously and are held there by their intimate but decidedly un-precious rapport, their interactions realistically oscillating between the cavalier, the heartfelt, and the matter-of-fact. Corio and Mescal—the former an exceptionally poised and perceptive newcomer plucked from a field of 800 auditioners, the latter one of the only good things to emerge during the first wave of COVID in Normal People (2020)—function not like two actors with natural chemistry but as two distinct strands of the same braid.

The fixity of this bond—the assurance that we will follow these deeply charming performers wherever they venture—allows Wells to take risks with form and structure. In tandem with her DP Gregory Oke, the filmmaker crafts images of severe and enigmatic potency, from the odd, extreme close-ups that leave their subjects inscrutable to the static shot of a spit-spattered bathroom mirror that transports us from night to day in a matter of seconds. In collaboration with editor Blair McClendon, who was key to making Kitty Green’s seemingly humdrum The Assistant (2019) into a pulse-pounding thriller composed of keystrokes, covert looks, and other workplace gestures, Wells establishes a sidelong, off-the-cuff rhythm to Aftersun. Using slow, gauzy dissolves and era-bridging cuts, Wells and McClendon portray this vacation as a tapestry of vivid faces, totemic objects, uncanny textures, clashing sounds, and other scattered memories. Dramatic incident and linear causality are not priorities for Wells, who allows her film fleeting, lulling longueurs of sun-sapped fatigue and encroaching malaise. The precision and certitude of Wells’s formalism call to mind nothing less than her compatriot Lynne Ramsay’s 2002 masterpiece Morvern Callar, which similarly transformed a bare-bones story into a heady sensory experience that was nonetheless rooted in the caprices and growing resolutions of its female protagonist.

Like Ramsay’s film, Aftersun returns several times to the liminal space of the club, illustrated here as a psychic terrain through which grown-up Sophie trails her hard-partying dad on the strobing, sweaty dance floor. In these bursts of throbbing light and convulsive movement, Sophie studies her father and confronts his sheer unknowability; it is the signal tragedy of Wells’s film that Calum is doomed to remain unreachable to the daughter who loved him most. But this impression, too, is not the whole story, weighted as it is across the film with the portrait of Calum as a jocular, tender father trying his best to adequately care for his child during their time together, reminding her that a world of possibilities awaits her, the same world that he now feels to be beyond his reach.

Mescal solidifies himself throughout Aftersun as one of the more emotionally intuitive actors working today, investing tremendous nuance and sensitivity in Calum as he tries and fails to forget his demons. When Sophie lets slip a comment of breath-catching cruelty, one that cuts to the quick of her father’s financial straits, Mescal barely grasps the slight before emitting a strained, heartbreaking laugh to bury his own disappointment. Through his performance, we understand Calum as a man who cannot bear to live with himself yet persists with a slipping grin and good-enough cheer for the sake of his daughter.

Aftersun culminates in one of the most purely electrifying cinematic moments I’ve seen in quite some time, an extended dance between its leads—scored to Queen and David Bowie’s inescapable 1981 single “Under Pressure”—that plays out in two settings: the resort and the dreamscape of the club. In the final moments of this visceral emotional climax, the instrumentation cuts out save for some keening drones. The full-throated voices of two rock icons are stripped bare, and a song we’ve heard dozens of times becomes suddenly alien. In Turkey, a begrudging Sophie surrenders to a moment of ecstatic closeness with her father. On a dance floor that exists only in the mind, the mournful rage of the elder Sophie reaches a violent fever pitch. And then, without warning, Calum is wrenched away from the same child who shuts her eyes and clutches him in a past they once shared.

In this intricate sequence, borne of a daughter’s love and fury, grief is a bittersweet marriage of memory and regret. Aftersun is about what it means to move through life—falling in love, raising children, making art—knowing that there are ghosts one will never shake but forever carry, ghosts so real that we can close our eyes and see them there before us, unchanging figments who elude our embrace. When Calum’s gaze meets Sophie’s across an unearthly expanse that Wells’s film makes traversable, my mind returned to a passage from Marilynne Robinson’s novel Housekeeping, in memory of a mother at once departed and ever-present: “She was a music I no longer heard, that rang in my mind, itself and nothing else, lost to all sense, but not perished, not perished.”