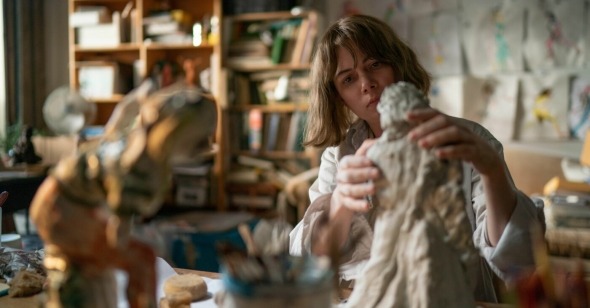 The State of the Art
By Matthew Eng

The searching American women played by Michelle Williams in the films of Kelly Reichardt remain grimly driven to attain their objectives, whether it be a canine companion in Wendy and Lucy (2008), drinking water and so-called civilization in Meek’s Cutoff (2010), or an old man’s heap of sandstone in Certain Women (2016). In Showing Up, the actor and director’s latest collaboration, the goal is the completion of an impending gallery exhibit centered around the ceramic statuettes of Williams’s Lizzy, a mid-career sculptor based in Portland, Oregon. But art isn’t easy, especially when it must be balanced with the stresses of Lizzy’s day job as a clerical drudge at the Oregon College of Art and Craft; a withholding mother (Maryann Plunkett) who is also, awkwardly, her boss; a dotty father (Judd Hirsch) who has opened his home to two freeloaders; an unhinged brother (John Magaro) who won’t pick up his phone; a busted water heater that her landlord, Jo (Hong Chau)—a fellow artist preparing for two shows of her own—plans to replace any day now; and the arrival of a wounded pigeon nearly mauled to death by her ravenous cat.

There’s a dogged, hard-bitten intensity to Lizzy, the air of someone who not only knows there aren’t enough hours in the day but also forever hears the clock ticking. Mistakes are to be expected along the way, though that hardly dampens their sting: when the school’s kiln operator (sweet, sexy André Benjamin, doubling on flute here) accidentally burns one of Lizzy’s creations, the grimace on Williams’s face is like that of someone forced to identify a body. The gallery exhibition gives Reichardt’s film, set over the course of a single week, a decisive, concrete event to push the viewer towards; it is Showing Up’s endgame, though not necessarily Lizzy’s. Her holy grail, like that of Jo, is conceivably to reach the rarefied point where artmaking becomes a livelihood, affording one the full-time freedom to create on her own terms, without the compromise of day jobs or the distraction of tenants. The raw material of Reichardt’s film is the daily, soul-sucking minutiae that comes with choosing and devoting oneself to the artist’s life in a country that cannot nor will not sustain such endeavors, rendering them ever more impractical without competitive grants, family money, or other such safety nets.

Since this is a Kelly Reichardt film, none of these concerns are stated outright but deftly baked into the characters and their respective proximities to precarity. They are evident in the frown lines and dark circles on Williams’s sallow face and felt in each frame of her self-abnegating performance, which summons and suppresses the torment that bubbles beneath the film’s surface tranquility. The actress has played taciturn and solitary for Reichardt before, sometimes a tad too opaquely, but her Lizzy is a veritable curmudgeon, cloaked in a crust of cool, harrumphing discontent. Whatever delight exists in Lizzy’s life comes to bear in her playful, eerie, varicolored figurines and the rigorous labor they require. Working with cinematographer Christopher Blauvelt, her trusted collaborator since Meek’s Cutoff in 2010, Reichardt composes her shots with a sensuous tactility, lingering on and luxuriating in the sight of Williams’s hands as she molds, snaps, and strokes her clay creations in her garage studio before they enter the furnace. (Lizzy’s sculptures were created by the Portland-based artist Cynthia Lahti.) What emerges in these moments of calm and patient incandescence are the specifics of an artist’s process, one that necessitates concentration and stamina but also manual, routinized dexterity.

Less charitable, more evaluative writers than Reichardt and her longtime co-scenarist Jonathan Raymond would have likely counterposed the seriousness of Lizzy’s repeatedly thwarted attempts at artmaking against those of the flighty but undeniably talented Jo, whose frayed friendship with Lizzy dates to their days as comrades at Oregon College. (Reichardt and company had carte blanche to film on the grounds of the school, which sadly closed its doors for good in 2019.) But Jo occupies a special, next-to-center space in Showing Up, which occasionally breaks away from Lizzy’s story to depict Jo at work in her studio or diligently surveying the placement of her vast, unearthly installations. (These were made by the Bronx-based, Israeli-American artist Michelle Segre, who has utilized ingredients as diverse as yarn, papier-mâché, beeswax, and lotus root in her all-consuming concatenations.) Reichardt’s conception of contemporary artmaking is refreshingly egalitarian; like Lizzy, all of the film’s fictional artists are authentically pulled towards expression. In one of the loveliest scenes, Lizzy finds herself alone in the wing of the school where Jo’s exhibit has been mounted; entranced and visibly moved by her frenemy’s achievement, Williams lets slip the closest thing to a smile that we can detect across the entirety of her performance.

For Lizzy, such instances of everyday rapture are a tonic from the disturbances that continually crop up and throw her off course. The primary pleasure of Showing Up is that Reichardt treats all the chaos and consternation of Lizzy’s consequential week with a light touch that verges on wry amusement. The filmmaker has described this film as her first comedy and cited Elaine May’s A New Leaf (1971), Jonathan Demme’s Citizens Band (1977), and Claudia Weill’s Girlfriends (1978) as inspirations to her and Raymond. (The origins of Showing Up lie in, of all things, a scrapped biopic of the lionized Canadian painter and writer Emily Carr, who was waylaid for years by the business of being a landlord.) Weill’s film feels like the key influence on Showing Up, particularly in the push-pull bond between Lizzy and Jo that Reichardt and Raymond increasingly prioritize. Locked into an often hilarious pas de deux of passive-aggression with her costar, Chau is exceptional from scene to scene, perfecting a blithely aloof aura and a Kevlar-thick facade that refuses to absorb Williams’s crotchety moods and snipes.

Yet there is a mutual, tangible respect between the two, perhaps deriving from the long-held recognition that they are sisters engaged in the same struggle, an identification also made by the good-natured Marlene (Heather Lawless), a visiting glass artist at the College, who becomes an instant admirer of Lizzy’s distaff dolls. Prior to Showing Up’s subdued debut at Cannes, Williams spoke candidly to Variety about her director’s efforts to supplement her living as an independent auteur who has been fêted in France yet remained regularly underfunded at home, noting that Reichardt “has a theater named after her at the Sorbonne, but she has to teach to get health insurance.” Reichardt, who has revealed a mordant sense of humor in print interviews and public appearances, would likely refrain from characterizing her experiences this way. Yet Williams’s comments returned to me in the days since seeing Showing Up, a film that is far from a tract yet unmistakably holds artistic labor as dear as the fruits it produces.

In the struggle to make art, there will always be cold showers, fickle landlords, annoying coworkers, needy cats, sick birds, dropout siblings, squabbling parents, potato chip dinners, and sleepless nights. Nothing spectacular or outrightly successful comes of Lizzy’s show. But does this make it a disappointment, much less a failure? As Lizzy ambles the city streets with Jo, basking in the setting sun, blocks away from the gallery that holds the culmination of her career, an air of satisfaction suffuses an already serene scene. Perhaps the process is the point. Maybe, for now, the work is enough.