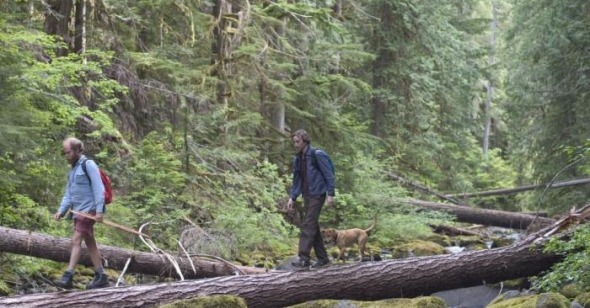 Men of a Certain Age
Kristi Mitsuda on Old Joy

Old Joy opened in 2006 at New York’s Film Forum, where I was working at the time as a publicity assistant. Into the space following the blockbuster summer season—which had just seen Pirates of the Caribbean: Dead Man’s Chest break opening day and weekend records and Sundance-anointed Little Miss Sunshine reach indie-level box-office heights—and before the full turn to the more clamorously prestigious fare of the fall season stepped Kelly Reichardt’s second feature. Old Joy had premiered at Sundance as well, but the micro-indie’s intricately realized road trip felt worlds away from that in the shticky Sunshine, the rhythms of which were reliant upon the even-by-then rundown dysfunctional-family-coming-together trajectory. The critical reception of Old Joy was reassuringly adoring, but the question remained whether a movie so delicate in scope would manage to make a mark in such a market.

Its release felt like a breath of fresh air. Deep into George W. Bush’s second term, U.S. fiction films largely continued to exist in a political vacuum. (By contrast, politically minded documentaries clogged theaters, spurred on by the rising accessibility of DV and the direness of the historical moment.) Reichardt sets main characters Mark (Daniel London) and Kurt (Will Oldham) in a particular time and place: the present in proto-Portland (and its wooded outskirts) of currently popular liberal-utopic imagination. While unobtrusive, these coordinates help map out the personalities of both men by situating them in a broader cultural context. In notably showing Mark listening to Air America broadcasts on the car radio, Reichardt grasps and gives voice to a basic but strangely underrepresented notion that the political is personal, indivisible from our everyday ways of engaging with the world. The simple attribution of political consciousness to a protagonist—as a fact of character, a defining trait among others—felt bracing (and still does) in the face of a national cinema that tacitly encourages the walking of a bipartisan line even in its entertainment lest it lessen the box-office potential from the other side, as well as in the context of an indie cinema which has more often been known for grafting quirks onto characters to indicate personality.

Along with Ramin Bahrani’s Man Push Cart and So Yong Kim’s In Between Days—both first features that had also screened at Sundance that year—Old Joy emerged as something of a harbinger of a mini minimalist movement on the American indie scene (works by these filmmakers would later be dubbed neo-neorealism by A.O. Scott in a New York Times Magazine article), similar in their close, unhurried attention to socioculturally specific individuals and the textures of their variegated experiences and environments. Much of the loveliness of Reichardt’s film has to do with the reflective and fitting quiet it fosters in its contemplation of two longtime friends as they find their way to some hot springs over the course of a weekend. In this portrait of people formerly close who’ve grown apart—an experience with which many of us are familiar yet seldom a subject studied onscreen--what remains unsaid is often as important as the little dialogue that is (the silences often accompanied by the sounds of surrounding nature, as well as a stirring score by Yo La Tengo). Old Joy, in taking its characters into the forest absent others (aside from Mark’s dog, Lucy), provides a hermetic space that creates an intimacy between the two anew, and us with them.

Kurt and Mark haven’t seen each other in an unstated but clearly great amount of time, but when the former floats into town and suggests a last-minute trip, the latter quickly agrees. Reichardt allows us to perceive the painful realization of the shiftings that have taken place in the relationship through such minutiae as self-conscious body language, palpable graspings for the words to come next in the conversation, and forced cadences that suggest overcompensation for lack of feeling. Allusions to old touchstones—a bong they used to share, an independent record store they frequented—sketch the common ground upon which the friendship might’ve been built. But their middle-aged selves no longer align, Kurt’s nomadic, freewheeling nature (coinciding to some extent with a capacity for freeloading) contrasting with Mark’s self-possession and sense of rootedness and responsibility. Set-piece scenes display more fully the awkward gaps in connection where closeness used to be; in a campfire moment, Kurt describes his theory of a tear-shaped world, and the camera clings closely to Mark’s listening face to reveal a somewhat derisive bemusement when, you sense, he once would’ve once taken pleasure in his stoner friend’s poetic speculations (such as in the film’s crescendo scene where a beatific Mark falls under the spell of Kurt’s tale of dreams and run-ins around town on his bike, when he hears the inspiration from which the film gets its title, “Sorrow’s nothing but worn-out joy”).

A subtle antagonism pulsates between the men, due to a kind of one-upmanship less to do with actual competition than assertions of allegiance to diverging lifestyles; in the recognizable way of reunions, the stories they tell in catching up seek on some level to justify their choices to the other. Kurt’s tales of bonfires, drum circles, and beautiful women at Big Sur and Mark’s of spearheading a community garden in his neighborhood illustrate the divide; while the former remains on the road, the latter’s taken the straight route with a job, house, wife, and baby on the way. We watch each man evaluate his friend in a new light—awakened to the flaws of the other after a lapsed amount of time—Mark displaying an agitated awareness of Kurt’s tendency toward new-age flakiness and Kurt attuned to Mark’s cell phone-distracted presence and less than whole-hearted responsiveness. Although neither discloses to the other any sense of discontent with the direction his life has taken, Reichardt alludes to the edges of both in book-ending passages that fleetingly reveal unmentioned downsides. The opening of the film captures Mark trying to meditate but unable to sit still, disturbed by a fly, and then involved in a passive-aggressive discussion with his wife that doesn’t quite bespeak enlightenment and marital bliss, while the conclusion follows Kurt as he wanders around town after being dropped off by Mark, the line between him and the homeless man asking for spare change on the street clearly a thin one.

Superheroes, historical figures, action bad-asses, man-children—such types are well-represented in this country’s mainstream, but films focusing on men of the kind we might know or meet in the course of our daily lives are rarities. Discussions of gender representation in American movies tend to revolve in the negative around the lack of complex roles for women—but there’s little acknowledgement that there’s also a dearth of human-scaled depictions of the opposite sex. It’s the sensitivity of Reichardt’s male portraits that so surprises; these characters feel close to home. And Old Joy’s layered description of a possibly irrecoverable adult friendship in the context of a cinema that valorizes Judd Apatow’s enshrinement of one-note bromances predicated primarily on a shared dedication to the juvenile (the prolific producer was just gaining cultural ascendancy at the time of Old Joy’s debut following the 2005 release of The 40-Year-Old Virgin) still rings as something of a small, revolutionary step in the right direction.

As it turns out, I needn’t have fretted; moviegoers flocked to Old Joy upon its release, and it was held over at Film Forum well past its initially slated two weeks. Granted, its successful showing in a single theater with a known cinephilic following might not seem much, but in a city with a perpetual wealth of cinematic riches at its fingertips, carving out any sort of niche is still quite something. Such an understated film finding its place in the sun in a noisy movie year of the kind we seem to keep repeating, Groundhog Day–style (until we make our way to some sort of ultimate redemption?) provided then as now a not insignificant reminder that times of overwhelming mediocrity also lay groundwork for the occasional emergence of originality. And while River of Grass, Reichardt’s first film, also gathered a critical following, Old Joy broke her out to a broader audience. Since then she’s been building an admirable career that—despite falling far outside the mainstream—has proven to have considerable cultural reach (subsequent films Wendy and Lucy and Meek’s Cutoff figured centrally in widely referenced New York Times Magazine articles, including the aforementioned Scott piece as well as Dan Kois’s controversial one on “cultural vegetables”). That she’s been able to more frequently craft her uniquely voiced, lyrically wrought revisionist road trips—which continue to relate characters and stories attuned to our lives and times—is something that brings no small amount of joy.