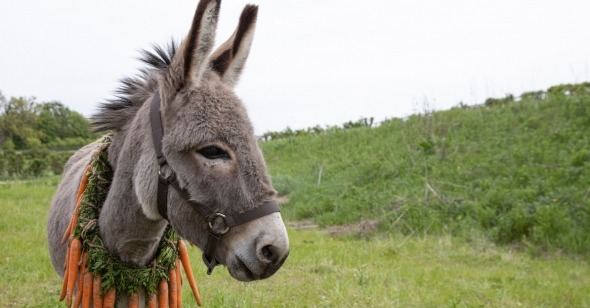 The donkey is dead—or seems to be. He lies there, lifeless, in some strobe-lit, claret-colored abyss that has the feel, alternately, of a purgatorial hereafter and, once a pair of female human hands enter frame and gently caress his body, a warped erotic fantasy. It soon becomes clear, via a vertiginous overhead shot, that we are in one of the enclosures of a three-ring circus. Though since no audience is yet visible, we can't say for whom, exactly, this vaguely ritualistic interaction is being performed. The woman comes close to the donkey's mouth, breathing into it. He rises, effectively reborn, and is soon christened, after the title of Jerzy Skolimowski's phenomenal latest feature, EO.

Something about this setup and its stray components (the animal protagonist; the tender young woman; the overall holy/hellish aura) may seem familiar. That's because Skolimowski, who directed the film and co-wrote it with his frequent collaborator Ewa Piaskowska, is riffing on Robert Bresson's canonical 1966 masterpiece Au hasard Balthazar, which also, in the meagerest abstract, concerns itself with the life, and ultimate death, of a donkey.

But wait, actually… is he doing that? Some Internet sleuthing shows that Skolimowski has both embraced and downplayed the Balthazar comparisons. The original story was supposed to be about a dog, until Skolimowski and Piaskowska decided there was something more mythic and accessible about a donkey. When the movie began shooting pre-pandemic (its production stretched a full two years through COVID and across multiple locales), its working title was said to be the one-letter-off Baltazar. And during EO’s festival run, Skolimowski's reaction to the Bresson comparison has varied from reverential to puckish to dismissive, almost as if he is trying to muddy the official record.

This all tracks with the movie itself, which constantly shuffles its locations, jumbles its aesthetic approach, and upends any clear-cut thematic aims. As its opening suggests, EO is a punkish act of both resurrection and necromancy, fragmenting the particulars of a widely acknowledged classic that addressed the modern world of its time, then bringing those shards forward into our own extremely nebulous and schizoid present.

This is Balthazar as EDM remix, a description made literal during an astonishing fairy tale interlude in which Eo finds himself in a nighttime forest lit up by neon-green lights. They prove to have a terrestrial source, yet initially seem (when coupled with Pawel Mykietyn’s booming score) to be the illuminative precursor to a sweat-and-drug-fueled rave. Up until this moment, about a quarter of a way through the 86-minute runtime, Skolimowski's style, though energetic and often eccentric (witness the frequent sound-muffled extreme close-ups of Eo that put us in his eerily alien headspace), is much more grounded.

It's the early scenes that lean heaviest, though not unproductively so, into Bresson homage. The girl from the opening scene, Kasandra (Sandra Drzymalska), even recalls Anne Wiazemsky's luckless Marie from Bresson's film, similarly treating her animal companion as both saintly confessor and unrequited lover. Yet she quickly becomes incidental to the story once Eo, like his precursor, is shuttled between owners. Bresson's film unfolded within a small area of the French countryside, and Jean-Luc Godard famously said it was “the world in an hour-and-a-half.” EO takes place in "the world," though over wider actual spaces (filming locations ranged throughout Poland and Italy) and endlessly porous and pliant metaphorical ones.

One vignette that typifies Skolimowski's approach involves Eo being transported by a trucker across a frontier checkpoint. At a rest stop, the trucker is engaged by a hungry young woman who reads, at a glance, as an itinerant illegal. The trucker entices her into his cab with food. He does most of the talking, then casually proffers sex as a reward for his graciousness. The woman recoils in apparent fear and disgust and runs off. The trucker scolds himself because, in actuality, he was joking about sexual gratification. He wonders to himself why, when it comes to interacting with people, he always screws things up. Then another man brandishing a knife reaches through the driver-side window and slits the trucker's throat.

The escalating absurdity of this situation, along with the disorienting sense of the interpretive ground shifting beneath our feet second by second, epitomizes EO's brilliance. You could say Skolimowski is grappling with ideas of sovereign borders, socioeconomic instability, and forcible migration in a world increasingly off its axis. You could also say this whole sequence is little more than a brilliantly told cosmic joke, a cheeky illustration of a supreme being having a hearty laugh at humanity. Or perhaps the meaninglessness is the real point, the universe being an essentially godless place where things occur without much rhyme or reason, and any attempt at apprehending intent or motive is its own form of madness. And what does the donkey have to do with any of it?

Like Bresson's brutalized beast, Eo (seamlessly played by six separate animals) is an ever-shifting protagonist—participant and bystander; a figure of fun and pity; an uncorrupted contrast to mankind and a dead-eyed void that reveals nothing much at all. We feel for him at the same time we question that sense of compassion. Is it the circumstances or the animal doing the emotional heavy lifting? Or is it some other intangible, never to be named?

In one unforgettable sequence, Eo is assaulted by a drunken horde of soccer hooligans upset that he distracted their goalie from blocking the other team’s winning kick. The camera assumes the beatdown donkey's point of view (here as elsewhere, the cinematography by Michal Dymek proves endlessly adaptable to whatever Skolimowski's inexhaustible imagination demands). Then we cut to an uncomfortably up-close-and-personal shot of a four-legged robot running through a field. It falls over. It awkwardly rights itself and gallops some more. Is the jackass dreaming of the electric sheep, or is it dreaming of him? Perhaps the unfathomability of the images, and our respective, deeply personal reactions to them, are all there is.

For me, what EO most singularly captures is the very alienating and restless pace of life at this moment in time. The sense that there is no solid ground to stand on. That we're hurtling through incidents and experiences (all pitched at the same level of import) with little ability to reflect on what we've been through before something else demands our attention. That Eo is not possessed of human consciousness only makes his journey through an anthropoidal Moloch (a gauntlet where an even icier-than-usual Isabelle Huppert lies in climactic wait) that much more unsettling.

There's only one certainty for all beasts, and where Bresson imagined Balthazar in a (possible) state of grace at his end, Skolimowski leans heavy into chattel-herded bleakness for Eo’s curtain call. Here, too, though, there is still apparent beauty, and not just in the margins of the frame but also on all levels visible and suggested. We can’t know for certain if a donkey might perceive the splendors of life as the inevitable approaches. But Skolimowski, at least, sees them for him.