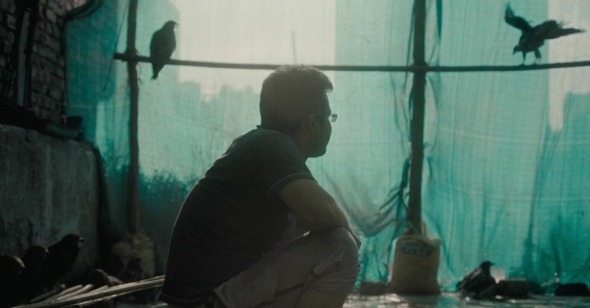 “Delhi’s air has changed, and so has its metabolism. Songbirds sing at a higher pitch to communicate over the traffic noise. Lizards are growing new toes. Every life form adjusts to the city now. All improvise and adapt to the city.”

In All That Breathes, the story of two brothers reveals the complex ecosystem of an entire city and, beyond even that, the interconnectedness of all things, from the rocks to the vermin to the humans at the top of the food chain. The second feature directed by Shaunak Sen, supported by a notably international crew, the film is the first in history to win a best documentary prize at both Sundance and Cannes—festivals with somewhat different aesthetics and priorities—but it’s unsurprising given the elegant complexity of the craft and Sen’s ability to find the divine in the smallest of moments and creatures.

Nadeem and Saud are two New Delhi–dwelling brothers and former teenage body builders who now apply their work ethic and knowledge of sinew and bone to rehabilitating injured black kites, birds of prey that soar over the city in droves. In the film Nadeem describes them not only as magnificent creatures but also as the microbiomes of their delicate ecosystem, because of how they reduce waste by picking through the city’s trash in search of food and materials for their nests. Despite this essential service, however, the kites are threatened by air pollution, overcrowding, and apathy. While the brothers run a soap dispensary, their business is merely a way to stay afloat in order to pursue their passion for the birds. In the course of the film’s 91 minutes we see how they will do anything in their power to save their feathered friends; attempting to fish an injured bird out of a cold, polluted urban lake, completing a crucial wing surgery during a blackout, and convincing a neighbor to spend the next two months either wearing a helmet or carrying a very large stick every time he tends to his animals on the roof, so as to avoid continued assault by the kites who have nested there. Nadeem and Saud’s dedication is both touching and drily humorous because they seem so matter of fact about it; even on their most challenging days the brothers (and their guileless scene-stealer trainee Salik) lapse into a disarmingly easy banter while they work.

Sen became interested in the black kites while contemplating his city’s air pollution and infamous smog. Having spent my adolescent years in New Delhi, I remember winters where it thickened into an opaque mist visible as soon as one entered the airspace of the city, and that was more than 20 years ago. Sen looked to the gray sky and, struck by these birds, which are both ubiquitous and rarely noticed, he realized how they function as an embodiment and reflection of the city’s health. As compelling as the participants of the film and their struggle to support their work are, the artistry of the film lies in how Sen has captured a thousand tiny miracles within the brothers’ unfolding story, moments just as easy to overlook as the kites, and woven them together with exceptional vérité footage, landscape photography, interviews, and voiceover to meaningfully depict our entwinement with “all that breathes.”

Nature will always balance and rebalance, living creatures adjusting and adapting to the others that surround them. True to its title, the film doesn’t focus on the kites and humans alone; often the camera roams gently over the city in its most hypnotically lovely light, at dusk or early morning, offering us a moment to breathe and become familiar with other overlooked or reviled denizens of Delhi. The film opens with low, slow shots of rats in the dark of night skittering in waves over heaps of garbage; one interstitial features flies daintily drinking out of a puddle that reflects the city’s landscape; a millipede climbs out from under a discarded tarpaulin. Even the kite is introduced and then revisited through a variety of obfuscations that seem designed to make us consider its presence more expansively than the standard close-ups or spectacles of flight: through the shuffle of a cardboard box with holes punched in it, or the unmistakable shadow of a bird of prey on concrete. Images like these encourage deep observation, and the film’s sound design dramatically amplifies the symphony of the animal world, shifting focus away from the typical honking and bustling of a city’s soundscape with confidence and intention, urging us to consider what we may overlook in our own ecosystems. Pigs rutting through a dirty canal are filmed with graceful silhouettes contrasted against the city lights shining off the water, with composer Roger Goula’s glittering electronic arpeggio, contributing to the feeling that the city’s seemingly ordinary sights are imbued with a touch of magic—when the light is just right and one has learned how to look.

The film consistently asks us to open our eyes and see the world with wonder. Nadeem describes the first time he handled an injured kite, and upon seeing it up close, regarded “a furious reptile from another planet.” With affection and humble respect, he conveys that otherworldly creatures should be celebrated when we are lucky enough to cross their paths. This sense of awe is echoed throughout: Nadeem considering science fiction as a genre which pushes past the boundaries of conventional knowledge or explaining that their mother placed equal value on the natural and the supernatural, believing the boundary to be not just porous but a fallacy.

The cinematography from Ben Bernhard, Riju Das, and Saumyananda Sahi is a marvel unto itself; sometimes intuitive, sometimes clever, precise and yet lyrical, moving fluidly between the earth and sky. Intermittently, the camera will be placed at a high angle or present a wide view of the city, as if from the birds’ perspective, sometimes in unexpected ways, like the footage that appears to be from a security camera capturing the men playing a game of cricket in their cramped basement workspace. The film shows (in cinematography) or mimics (in editing) the natural rhythms of nature, moments of flow punctured by sudden disruption, such as when Salik’s glasses are unceremoniously snatched from his face by a passing kite who might use it in their nest, perfectly illustrating the brothers’ discussion of the species’ ingenuity in a human-dominated environment. The filmmakers seem to preternaturally be in the right place at the right time, capturing both lightness (the rapport between brothers, or Salik earnestly asking if a kite would be likely to eat him if he played dead) and more serious moments, as when Nadeem’s wife is getting ready to join the protests against the increasingly anti-Islamic climate that continues to plague Indian politics. It is a brief exchange, yet all of the love, frustration, and worry between spouses is communicated in a few words, facial expression, and body language. Such scenes are crafted to appear effortless, but clearly required a deep relationship between filmmakers and participants, profound sensitivity during filming, and a meticulous edit.

All That Breathes’ connective tissue is the brothers’ voiceover, so beautifully written and essayistic it complicates a pure vérité reading of the film, elevating and exemplifying its central themes. It is through Nadeem's and Saud’s words that we learn that the kites have been found using cigarette butts in their nests as ready-made insect repellent. It is here that the brothers, profoundly bonded but restrained in communicating their feelings to one another, explore what it means when Nadeem wishes to spread his wings beyond their rehab center—that he, too, must experiment, adapt, and learn in order to survive a rapidly changing world.

In a film that revels in discovering the unseen—the sliver of moon still visible in broad daylight, or an overcast image of Delhi apartment buildings revealed to be a reflection in water when a ripple slowly crosses the frame— the brothers’ Muslim background and its relevance to the story also becomes apparent gradually. The call to prayer plays somewhere in the neighborhood as Salik feeds birds on the roof, and we hear the use of Arabic words that have found their way into other languages like ‘sawab,’ which in Islam refers to spiritual standing earned from good deeds and moral action. As the film progresses, however, this identity and its implications become clearer, thickening like the smog around them. Just after the scene of the colleagues playing cricket at their offices, there is a news broadcast about the Citizenship Act, which accepts refugees from Pakistan, Afghanistan, and Bangladesh—provided they are not Muslim.

Sen has said in interviews that this is a film about ecology and not politics because that is where his subjects’ interests lie. Religious practice exists on a spectrum, and Nadeem’s may best be summarized by the prayers he offers at his mother’s grave, occasionally interrupted by shop talk. Shortly afterwards he tells his wife he will be unable to join the protests in support of their Muslim community because there are just too many kites coming in, and this is important work for the survival of the city as well. Religion may not be a focal point of the brothers’ lives, but in an increasingly fractured and intolerant environment, the way they are perceived continually forces a shift in perspective. Given the political context, the film works on an allegorical level whether the brothers intend to engage directly with politics or not. As they continue their work, the outside world encroaches and disrupts, in the form of climate crisis, the rising cost of the meat needed to feed the many birds being nursed back to health on their apartment rooftop, the financial strain of running their labor of love, and the increasing anti-Islamic sentiment coursing throughout the country.

The kites that indicate the health of the city might also read, in the language of this film, as a symbol for Nadeem and Saud, suddenly cast as outsiders by the government of a country their family has resided in for generations. In New Delhi, where so many religions and cultures have existed alongside one another, leading in waves over centuries, fundamentalists now deny, appropriate, or reject the contributions of their Muslim countrymen. One example is when Indian Prime Minister Narendra Modi delivered a speech invoking the name of a long dead Mughal Emperor to stoke anti-Islamic fires; he was speaking from Lal Qila, which is one the greatest architectural contributions the otherwise questionable rulers made to the city, and is not so very far from Wazirabad where the brothers and their community live. After balancing the fight for rulership into a so-called secular democracy that allowed Muslims to integrate into the city’s diverse environment, they are now being pushed out, sometimes by force and sometimes by fear, just as the kites drop from the sky, stricken, as humans take up more space and power in the city’s delicate ecosystem.

Achieving balance in nature is a complex process. As the human population grew in New Delhi, the kites initially flourished, consuming and reducing their trash, creating a symbiotic relationship its people largely took for granted. However, the exponential increase of human life pollutes the air and water, creating a threat to the very existence of the city’s black kites and their now necessary waste reduction service. The kites continue to adapt; to find new ways to use our detritus, or cigarette butts, glasses, and other scraps as best they can. All That Breathes is a revelation not because it presents a straightforward clash between man and nature but because it understands that man is also nature. In their ecosystem, Nadeem and Saud persistently labor to right an imbalance, to create at least one gentle, perception-altering ripple in the reflection of their city.