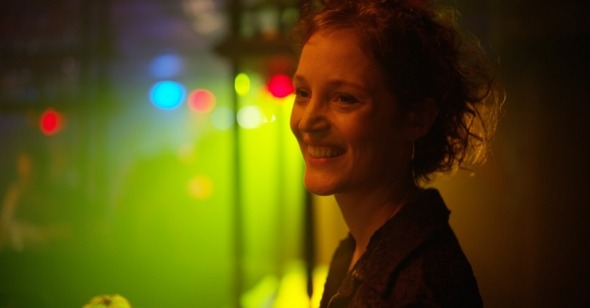 Few films have done justice to the sublime demands of motherhood—even fewer the gravity of losing one’s children, whether by choosing to abandon them or the insuperable woe following their premature death. Among the films that have, it is largely thanks to the expressive force of their female leads. There’s Juliette Binoche in Blue (1993), Krzysztof Kieslowski’s visually transportive meditation on a woman recovering from a tragic car wreck. There’s Michelle Williams in Manchester by the Sea (2016), Kenneth Lonergan’s drama about a working-class family suffering from the aftermath of a house fire. And, more recently, there’s Olivia Colman in The Lost Daughter (2022), Maggie Gyllenhaal’s examination of a mother who decides to leave her husband and toddler girls for a rapturous affair.

Now we have Vicky Krieps in Hold Me Tight, Mathieu Amalric’s wildly original exploration of maternal ambivalence, joy, and mourning. As Clarisse, a thirty-something wife to Marc (Arieh Worthalter) and mother to Lucie (Anne-Sophie Bowen-Chatet and Juliette Benveniste) and Paul (Sacha Ardilly and Aurèle Grzesik), Krieps is as sharp-edged and stubborn as she is suddenly ebullient. She smokes indoors and shames a stranger in German for publicly scolding his son. She sings off key to J.J. Cale’s “Cherry” while roaming the freeways in a pristine ’79 Pacer. She loves her family but also finds them suffocating. “Sometimes I wanted to throw the kids out of the window,” Clarisse confesses to a colleague, swigging a bottle of apricot juice. “And Marc—Marc was furniture.”

Amalric’s adaptation of a play by Claudine Galea feels fully cinematic, and takes full advantage of the medium’s ability to whisk the viewer from one perspective and temporality to another. This is a film that demands, and rewards, a keenly attentive viewer. Described by its press team (a bit evasively) as a movie about “a woman on the run from her family,” Hold Me Tight deftly unsettles what it means to “leave”—emotionally, physically, and spiritually—when staying put may prove impossible to bear.

Set within the course of a year, one that seems to start with Clarisse’s surprise departure, Hold Me Tight vacillates between her solo peregrinations and her family’s (possibly hypothetical) response. Given the mercurial shifts between place and time, limited subjectivity and omniscience, seasonal weather becomes a way to untangle a story disassembled from chronology. In an early scene, Clarisse packs a bag and scurries from her home at dawn, a few trees still glowing with residual foliage. Her rotating array of scarves, sweaters, and coats suggest a winter trip away from home. As the frost thaws, so too does the power of Clarisse’s magical thinking. “She left. That’s what happens,” she imagines Marc explaining to their kids. “It’s human.”

As plausible a victim as a perpetrator, Krieps has a way of merging warmth with grit that defies maternal stereotypes. “I’m inventing,” we hear her say as she steers Marc’s retro station wagon across southwestern France, listening to a cassette recording of her daughter’s piano playing. “I imagine that I left. Had to find something, right?” A film indebted to the powers of fantasy, Hold Me Tight is also a film about translation—how a woman can seamlessly shift from French to German just as she can make inscrutable loss legible to herself. Might an escape into the throes of imagination spare her—and by extension, us—from sorrow? Amalric seems to suggest that escapism, however tenuous, can at times prove the only available recourse to agency.

In his third stint editing for Amalric, François Gédigier offers a deft, often poetic, hand. Graphic matches abound, connecting Clarisse’s experience of the past and present visually rather than through narrative conventions: waving her arms as she dances while driving transitions to her ten-year-old daughter in a calisthenics class; snow piled on a windshield becomes a fuzzy coat worn over hotpants at a club when Clarisse is a young woman; a son wrangled by his dad in the bathroom is then a mother carried off after she collapses at a market.

The images create galvanizing force from shot to shot, linking scenes that might otherwise seem entirely disjunctive. A dreamcatcher that a child paints at a hockey rink shows up again in the back of an Alpine bar; bath bubbles become snow pellets that chill fresh fish. A power plant looms on the outskirts of town; nail polish festoons both lighters and iPhone cases; a gal pal runs a petrol station. Bookending the film is a wraparound scene of Clarisse flipping Polaroids of her family like cards in a game of Memory. “What if Mom comes back?” she says aloud, imagining a conversation between Marc and the kids. “She won’t come back,” she concludes. “It’s been too long.”

Her grieving is rational, yet never linear. And, like all grief, it is not without its moments of absurd—and absurdly sad—humor. In one scene, Clarisse brazenly unbuttons the shirt of a visiting musician in town, stroking a carpet of chest hair that clearly reminds her of Marc’s. This is a movie as sexy as it is often uncomfortable; Clarisse and Marc are as hot having sex in a hostel bunk (while the kids sleep) as they are tipsily canoodling on the dance floor the night that they first meet. Parenthood doesn’t rob them of libidos any more than it scrubs away Marc’s tattoos or Clarisse’s sultry smirk. As children or teens, Paul and Lucie are as nuanced and spirited as their hot-blooded parents.

“Start again! Start again!” Clarisse furiously repeats, slamming the Polaroids face down on the bedspread. But can she? Can anyone after becoming a mother? Hold Me Tight comes about as close as a film can to capturing the awful—and awe-inspiring—anguish of living in the memory of loved ones lost. At 38, Krieps has finally landed a lead role worthy of her tremendous depths.