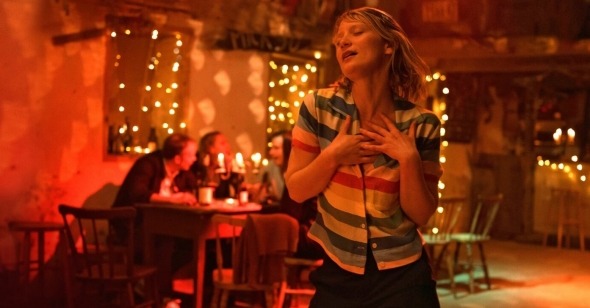 Brink of Life
By Matthew Eng

“No one’s expecting Persona.” These are the choice words of encouragement that filmmaker Tony (Tim Roth) offers Chris (Vicky Krieps), a fellow writer-director and the mother of Tony’s daughter, early on in Mia Hansen-Løve’s tricksy, meditative comedy-drama Bergman Island. Chris hopes to develop her next film while vacationing with Tony on the Swedish island of Fårö, the longtime home of Ingmar Bergman; the pair even sleep and write in one of Bergman’s houses, the secluded cottage where parts of the agonizing divorce saga Scenes from a Marriage (1973) were filmed. Bergman’s legacy looms large over the shores and forests of Fårö, drawing copious makers and students of film to tour the idyllic land where one of cinema’s uncontested gods found domestic comfort and the creative inspiration to make movies of uniquely human-scaled horror.

The opening scenes of Bergman Island would not be out of place in a horror movie, in fact, set as they are around ominous scenarios like a turbulent flight and a placid boat crossing to a pastoral estate where there’s seldom another soul in sight. But these are false portents, as all distress that occurs is relegated to the mind of the film’s protagonist. Over the course of Hansen-Løve’s seventh feature, Chris experiences not just a debilitating case of writer’s block but also a crisis of faith in herself as a filmmaker. She groans at Tony’s invocation of Persona, the 1966 masterpiece that transformed Bergman’s life and career. Perhaps she senses the chauvinism inherent in the tacit meaning of “No one’s expecting Persona,” hearing the unsaid words that could easily follow such a statement: from you. More than two decades Chris’s senior, Tony is a highly acclaimed auteur, seen churning out drafts with ease and constantly fielding calls from the bad news–bearing producers and financiers behind his upcoming project; it is he, not the lesser-known, tagalong Chris, who has been invited to Fårö for a series of events at the island’s Bergman Center—including a master class that a weary Chris walks out of. (It requires no stretch of the imagination, just a penchant for perusing the “personal life” sections of French filmmakers’ Wikipedia pages, to identify the Luxembourger Chris and the British Tony as expatriated avatars of Hansen-Løve and the elder, celebrated cineaste Olivier Assayas, Hansen-Løve’s former partner and the father of her daughter.)

A contemplative dinner conversation between Chris, Tony, and several representatives from the Ingmar Bergman Foundation about the nine children Bergman sired and largely disregarded during his lifetime throws the meaning of the Persona line into further relief: the constraining gender expectations of the 20th century—and, arguably, our current one—couldn’t possibly produce a woman director of Bergman’s stature, range, and—more importantly—near-ceaseless prolificacy. When Tony tells Chris that no one’s expecting Persona, a film not coincidentally about the brutal blurring of two women’s identities, from her, what he really means is that no one’s expecting a Persona from a woman director, period.

Although Tony is a self-professed Bergman disciple and Chris is also a devotee, if more diffident, Hansen-Løve’s film is not solely reverential towards the director. Instead, through Krieps’s character, it’s questioning and even undecided about Bergman’s oeuvre. When Chris and Tony sit down in Bergman’s private screening room for a 35mm showing of Cries and Whispers (1972), a far cry from the “nice” Bergman that Chris first requested, we espy the characters watching Ingrid Thulin howling with glazed and squinting gazes. In the couple’s bedroom after the screening, an exhausted Chris calls Bergman’s classic “a horror movie without catharsis” and wonders aloud why the director hardly ever betrayed an inclination towards tenderness, even in his later years.

Here and elsewhere, one gets the sense that Hansen-Løve is using her protagonist’s skeptical voice to grapple with a storied filmography of hard truths that were usually delivered without sentiment by characters of selfish and staggering cruelty, and pondering the utility and authority ceded to these works by generations of critics and cinephiles. “Bergman Island” is a state of mind where the imaginations of countless filmmakers reside for their entire lives; think of those oft-Tweeted photos of an overwhelmed Ang Lee enclasped in Bergman’s arms while visiting Fårö in 2006. But what does it mean to create not just in the shadow but in the very kingdom of a towering genius, one who has left a permanent mark on so many who make movies? And what if this mark is less a blessing than a curse, something like a psychic stain that stifles the creative impulse rather than nurtures it?

“There’s a world outside your own asshole,” one character will tell another late in Bergman Island, chalking up the ceaseless existential reckoning of Bergman’s movies to mere daddy issues. This is one of several instances in which Bergman is denounced outright—another instance comes from Tony, who remarks that he hates The Seventh Seal (1957)—and despite the crassness of the remark, we can understand its reasoning, i.e. the resentment that an entire island and its hundreds of past and present inhabitants have been utterly eclipsed by a single man. But Hansen-Løve herself is not interrogating Bergman for the sake of, let’s say, canceling him. Instead, she helps Bergman off the pedestal that admirers are all too keen to strand him on and comes face to face with the artist and his art, working through her intimidation and insecurities to express herself with Bergman’s fortitude and self-assurance.

Midway through, Bergman Island assumes a new shape as Chris alights on an idea for a Fårö-set film called The White Dress, dramatized on screen as Krieps narrates its scenes to a half-interested Roth. As we watch the romantic reunion between a young filmmaker named Amy (played with gorgeous, heartbreaking abandon by Mia Wasikowska) and a former inamorato (Anders Danielsen Lie) at the wedding of a mutual friend, we gradually realize that this particular narrative holds autobiographical resonance for Chris.

The first half of Bergman Island bears the same nuanced, deeply felt acting that is the hallmark of Hansen-Løve’s ensembles, filled with faces that look creased by the daily business of being alive. Krieps, a naturalistic actor who seems, right now, as though she can do no wrong, evinces the same relaxed, soft-toned magnetism first seen by wider audiences in Phantom Thread (2017); she often looks like she’s stifling a laugh at a private joke that she wouldn’t dare share with you, lest she bruise your feelings irrevocably. She and Roth—in roles originally intended for, respectively, Greta Gerwig and John Turturro and later, incongruously Owen Wilson—credibly create a coupledom that is cozy and companionable but no longer arouses much passion from either; it is all too believable that Chris would cryptically identify Tony as “a friend” while spending the day with a shaggy-haired, clumsily flirtatious film student (Hampus Nordenson) whose age is closer to her own. Those hoping that the Scenes from a Marriage allusion will set the stage for some knock-down, drag-out confrontations will be disappointed. Chris and Tony’s relationship is not a war, but rather a permanent winter, and their malaise makes for credible if not always fiery drama.

Nevertheless, Hansen-Løve is still staging and cutting scenes like a thriller, working alongside editor Marion Monnier, an indispensable, longtime collaborator to both her and Assayas. Mundane moments—like the purchase of sunglasses at a museum gift shop—curiously possess the quick, multi-angled, pulse-quickening kick of Michael Mann’s 1995 masterpiece Heat, Hansen-Løve’s oft-cited favorite film. But if these early passages of Bergman Island stir the mind and senses without eliciting much feeling then it is in the film-within-a-film passages where Bergman Island finally and fully sings.

Wasikowska and Danielsen Lie conjure real heat as their characters inevitably fall back into bed to make the same old mistakes, their carnal pull standing in stark contrast to the sexless comfort between Krieps’s and Roth’s characters. The couple’s dirty weekend plays out in scenes of heady, tactile sensations, recognizable to anyone who has ever needed to sink into a familiar embrace or lace hands with another, the touch itself a refuge. It’s about the way a shrieking, sugar-sweet disco thumper like Tina Charles’s “I Love to Love” can unlock an entire history with the bittersweet immediacy of Proust’s madeleine. Wasikowska’s expressive control is key to all of this, flawlessly illustrating a woman whose emotional armor is tissue-thin; crying tremulously in close-up during a wedding ceremony, the actress recalls a silent icon like Janet Gaynor more than Liv Ullmann. Desire in Bergman Island arrives in the form of Wasikowska’s Amy biking furiously, the wind blowing her hair back, as an ABBA hit blares like a cannon-blast in the night, a private siren song as she pedals to the bed where her lover promises to join her.

And yet such joy is not long for the world that Chris has so intimately described on screen. Amy’s final agony is precipitated not simply by the absence of love but also the memory of having once known love so closely and intensely. Similarly, Bergman Island exists just as vividly in recall—in the hours, days, and weeks after one first watches it. In both of its segments, Hansen-Løve’s film wanders through life’s interludes, zeroing in on the moments we make away from those with whom we have built our lives, whether they be partners, children, or parents. But it is also a film that summons imagined lives—the paths not taken, the partners not chosen, the scripts not written, the children not conceived. On the island of an artist who reflected and re-envisioned life as he knew it to be, Chris—and Hansen-Løve—find the courage to create, while accepting that there is no single narrative that can contain the whole of one’s life.