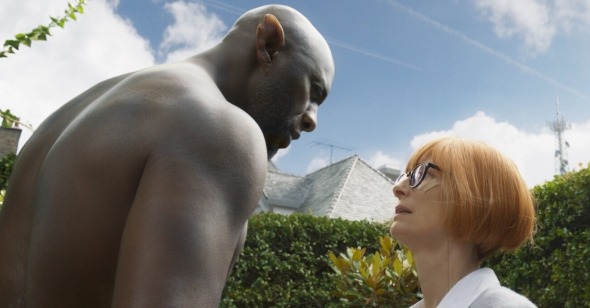 Early on in George Miller’s Three Thousand Years of Longing, Tilda Swinton’s Alithea makes a simple but meaningful confession: “I find feelings through stories.” Alithea is a narratologist by trade, fascinated by the histories of every person, object, and building she encounters. It’s no coincidence that she discovers something truly special while rummaging through a pile of bottles, coming across one that is indistinguishable from the others. Fate has led Alithea to a bottle that holds a storyteller unlike any she has met: a Djinn (Idris Elba) who has experienced an endless lifetime’s worth of tales for her to discover.

Alithea and her Djinn are two sides of the same coin; each tries to find beauty and comfort in the lives they lead while navigating all the pain that comes with their respective powers. For Alithea, whose name in its original Greek means “truth,” that power stems from discovering and dissecting the reality behind mythmaking. The Djinn’s power is one of granting three wishes. But those granted wishes (as well as those left unfulfilled) are the stuff of legend, precisely the type that Alithea is both fond and wary of, leading her to interrogate him before she dares to make one. They expose each other over the course of a long conversation, breaking through the longing they feel for worlds they have known, whether through personal experience or secondhand knowledge via stories.

Much of Miller and co-writer Augusta Gore’s script seems intent on shaving down The Djinn in the Nightingale’s Eye, the A. S. Byatt novella they’re adapting, into something more accessible. The differences between the texts, amusingly, are like Alithea’s penchant for academia versus the Djinn’s flourish for life. Where Byatt’s work is more interested in how it presents historical details and toying with the stories that served as inspiration, insightfully analyzing and discussing everything from Chaucer to One Thousand and One Nights, Miller and Gore lean into the magic of fantasy, bringing to life these tall tales with sumptuous visuals. It is par for the course with Miller, whose films have always played with just how unreal one can make reality, whether it’s polyamory with the devil, a pig in the city, or a cautionary tale about climate change told with explosions and racing trucks.

In a sense, Miller’s film is more preoccupied with the stories that the Djinn tells than conversations that Alithea and the Djinn are having about them—and, in turn, about each other, as each story reveals another piece of the being that tells them. Each tale—including fanciful retellings of the Queen of Sheba and Solomon’s courtship, Şehzade Mustafa’s beheading, and Ibrahim of the Ottoman Empire—is depicted with vivid imagery. Painterly depictions of the cosmos, an effects-laden living instrument that plays Tom Holkenborg’s sweeping score, and lavish production design help each scenario avoid the repetition that might have come with depicting such reiterative patterns of human folly. As Alithea notes, these stories of wishes and wars, of love and loss, are all cautionary tales that prove her hesitancy to embrace the promises of a Djinn.

All of the film’s visual splendor exists in stark contrast to the dullness of the contemporary human world, which the director keeps contained to monotonous spaces like hotel rooms and conference centers (not dissimilar from the way Tarsem Singh contrasted fantastical worlds with intimate spaces in The Cell and The Fall). Each story that the Djinn tells moves fluidly into the next, even with near constant interruptions from Alithea, resulting in playful banter that never detracts from the film’s melancholic tone. There are a few missteps, including a distasteful fat joke in a tale that otherwise rather sincerely presents larger feminine bodies as desirable to a sultan (once the status quo) and an exhaustingly on-the-nose racist rant from Alithea’s neighbors that feels too of the Brexit era—miscalculated and juvenile moments in an otherwise mature, fanciful film that prioritizes the way stories distinctly impact how we connect to and understand one another.

Through all this excess and beauty are two constants: Tilda Swinton and Idris Elba. Though the film harnesses their visual chemistry—their eyes gazing at one another at times, blankly staring off into the distance at others—it is the sound of their voices that gives the film its power. Each of the Djinn’s stories, however inhuman and imaginary, is lent a sense of humanity through Elba’s vulnerable vocal performance. His relative heat (in a literal sense, djinn are created of “fire and air” and, more flippantly, the actor is very hot) and combustible emotion set against Swinton’s cold and distant questioning creates just the right balance to explore some of the larger themes that their relationship, in all its strange forms, presents—particularly the baggage that comes with one person possessing another. The film largely avoids discussing the racial politics of this relationship (save the aforementioned racist old ladies), only really questioning Alithea’s place in a long line of “masters” through the lens of her own perceived importance.

As such, Gore and Miller’s script loses some of the most revealing bits of introspection that Byatt’s novella allows both its human protagonist (named Gillian rather than Alithea) and its Djinn—actually discussing the politics of their relationship and what it means to submit oneself to another. But there’s an intriguing flatness to both of these figures in Three Thousand Years of Longing that makes them apt mirrors for the viewer's reflection. Alithea is just like the audience: a willing participant in the act of listening to stories and discovering new worlds. For all her lectures and studies on the larger meaning of mythologizing history, she is just as susceptible to a good story as any of us. Miller’s film may dodge some of the thornier subjects it evokes, but his storytelling abilities make it easy for us to give ourselves over to his escapist fantasy. Sometimes the best stories are the least convincing, after all, those that sweep us off our feet like Solomon seducing Sheba with the pluck of an ethereal sitar string.