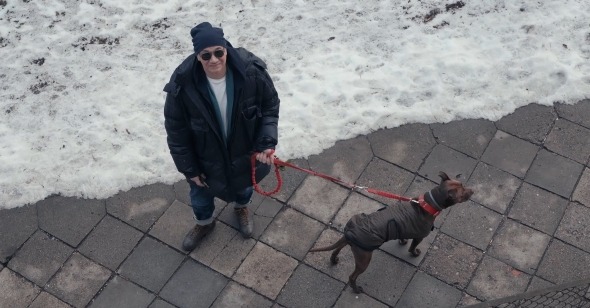 Down to You
By Chris Shields

Albert Camus sets much of the second chapter of The Stranger on a balcony. In the novel, Meursault, after the death of his mother and a night of lovemaking with an acquaintance, wakes up alone. He makes his way to his balcony to smoke and watch the people on the street below. He observes the ebb and flow of daily life and then, as the sun sets and the streetlamps turn on, the day’s drama finally played out beneath his window, he reflects: “It occurred to me that anyway one more Sunday was over, that Maman was buried now, that I was going back to work, and that, really, nothing had changed.” For Camus, what Meursault observes from the distance of his balcony is human experience characterized by isolation and meaninglessness.

In his new film, The Balcony Movie, the Polish filmmaker Paweł Łoziński uses a similar frame in pursuit of different results. Łoziński’s film, shot completely from the balcony of his Warsaw home over the course of two years, is not coy about its interrogatory intent. Throughout, the filmmaker explicitly asks people who pass, “what is the meaning of life?”; some answer in profound ways, while others admit to still being in the dark on the subject. Through the simple act of communication, the filmmaker attempts to reach across Camus’s chasm of detachment in search of connection and meaning.

Łoziński’s documentaries focus on the limits and possibilities of communication. In Father and Son (2013), Łoziński documents a trip with his father, the documentary filmmaker Marcel Łoziński, from Poland to Paris during which a variety of thoughts and emotions surface through conversation, and in You Have No Idea How Much I Love You (2016), he observes, with rigorous intimacy, a series of difficult, revealing therapy sessions. In his latest film, what emerges from his sustained attempts at dialogue with the people he sees passing by his balcony is a work rich in varied yet shared human experiences—sad, funny, and surprisingly candid—that augments, or at least, troubles, The Stranger’s existential pessimism.

The Balcony Movie’s narrative action is initiated by the making of the movie itself. It begins with the camera observing the sidewalk below in silence before the filmmaker enters the frame to attach a microphone to his fence. As people pass his balcony, Łoziński calls out from behind the camera to them in the hopes of getting their attention and a moment of their time. Some walk by without stopping, while others look up toward his window with surprise and curiosity. He asks them to step closer to the microphone as he engages them, both successfully (some stop and engage) and unsuccessfully (others refuse to stop or quickly walk away), in conversation.

Łoziński explains the concept of his film to his subjects explicitly, telling them that he’s making a movie from his balcony about the people who pass by. In a moment reminiscent of Real Life, Albert Brooks's brilliant 1979 satire of vérité documentaries, Łoziński’s explanation leads one subject to ask, “wait, will this be in the film?” It’s this kind of naked view of the artwork coming into being that makes The Balcony Movie both profound and very funny. For Łoziński, formalism breeds comedy. In a manner similar to his countryman Zbigniew Rybczyński, Łoziński uses the machinery of filmmaking—the camera, the microphone, etc.—as slyly comic tools.

Early on, sound bedevils The Balcony Movie’s creation. Passersby are either too far or too close to the microphone, and Łoziński’s inability to capture high-quality sound becomes not just a frustration but a running joke. Throughout, framing, sound, and the general lack of cooperation of the film’s “cast” combine to create a variety of subtly humorous cinematic gags. At one point, for instance, a little girl rides her bike through the frame and jumps off, leaving the bike behind. It stands alone in the frame for a few comic beats before she scurries back to retrieve it. In another instance, a different little girl loiters in Łoziński’s frame. She refuses to cooperate with his questioning, and he tells her, in order to “be in the film” she has to do something. In frustration, he asks her to sing a song. This little girl, shockingly, doesn’t know any songs. The scene brings out Łoziński’s parental instincts, but he also seems a bit like a birthday magician who can’t find a cooperative volunteer. Small, humorous moments like these help create the film’s overall brisk, sketch-like mood.

As the days pass and filming continues, characters emerge, including Łoziński himself. The filmmaker builds relationships with the people he sees. There is Robert, the recently freed ex-con who asks passersby for assistance beneath Łoziński’s window. Over time the two men develop a rapport, and Łoziński gives him a shirt so he can go to a job interview. Even this kind gesture becomes a moment of real-life slapstick as Łoziński must lower the shirt down to the man below on a stick. One returning character is a woman who sweeps the sidewalk outside Łoziński’s home. We watch her stoically brush away leaves and later snow as the seasons change. She speaks with Łoziński about her dead husband, a hopeless alcoholic. Conversely, another woman shouts up at Łoziński as she hurriedly walks by, never stopping, but in their cursory, on-the-go exchanges, she tells the filmmaker about her late husband and the hole his passing has left in her life.

In one cryptic exchange, Łoziński learns that a woman’s ex-husband has passed away. She refuses to give details but through the filmmaker’s subtle probing, he discovers that rather than loss, the woman finally feels freedom. And in one of the film’s final, most powerful moments, an elderly woman in a wheelchair answers Łoziński’s persistent question, “what is the meaning of life?” After her caretaker repeats the question to her, she gives the film’s most reflexive and appropriate response. “Life is the meaning,” she says. Like The Balcony Movie, meaning is found in the making of the thing, in the doing of it. Meaning is not passive but active in Łoziński’s film, and its continuous parade of changing subjects and interactions creates the perfect metaphor.

Movies both create and help provide meaning, something that even Camus, with his lonely, impossible vision of human life gives a privileged place to. As Meursault watches from his balcony he notices people leaving the cinema and remarks, “Almost all at once moviegoers spilled out of the neighborhood theaters into the street. The young men among them were gesturing more excitedly than usual and I thought they must have seen an adventure film. The ones who had gone to the movies in town came back a little later. They looked more serious. They were still laughing, but only now and then, and they seemed tired and dreamy.” Yes, The Balcony Movie is about the contingency of human perspective and what that means for our lives and relationships, but it is also about what thoughtful works of art can create. As much as Łoziński’s film searches for very big answers in a clever and radical way, in the end, it’s also a movie, a very good one, filled with comedy, drama, beauty, and sadness.

The Balcony Movie was the closing night selection of Museum of the Moving Image's First Look 2022, screening March 20, 2022.