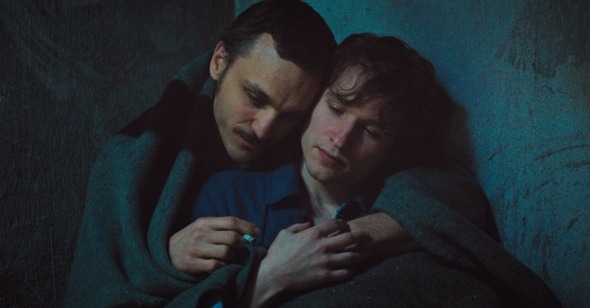 Look Back in Anger
By Matthew Eng

The imprisoned men of Great Freedom are constantly guessing at the fates of lives they can no longer claim as their own. Some muse with a resigned cynicism, others with a hope that will be whittled away by the brick-and-mortar fact of their existence. At the center of Austrian writer-director Sebastian Meise’s doleful yet clear-sighted historical drama is Hans Hoffmann (Franz Rogowski), a gay man who has survived the horrors of the Holocaust only to be directly routed to a West German prison following his camp’s liberation. Hans, though fictional, is an avatar for the hundreds of thousands of individuals convicted under the draconian provision of Paragraph 175, which made homosexual activities between men a punishable offense in Germany for well over a century, until the law was finally and fully repealed in 1994.

Meise’s film opens with a jolt as snippets of silent 16mm footage introduce us to Hans, sinewy and mustached, cottaging in a public men’s lavatory in 1968. As inhabited by Rogowski, Hans happily, hungrily presides over this workaday pleasure palace, engaging in forbidden acts with a range of fellow thrill-seekers. These encounters are being secretly recorded by a camera positioned behind the washroom’s two-way mirror. By the time these extracts end, the surveillance state has used this evidence of Hans’s “deviant sexual activity” to sentence him to 24 months in prison without the possibility of probation, a punishment befitting a repeat offender of Paragraph 175, just a year before the Stonewall uprising.

In depicting Hans’s various stints in prison after the Second World War, Meise and co-writer Thomas Reider adopt a circuitous structure that zigzags between eras with ease, thanks to Joana Scrinzi’s fluid editing. In 1945, a meek, shell-shocked Hans is consigned to the same cell as Viktor (Georg Friedrich), a disgraced soldier who seethes at having to share quarters with a homosexual. But Viktor, in spite of his prejudice, takes a shine to the younger man, whose sunken, evasive eyes are still reeling from unspeakable ravages; when Viktor, an amateur tattooist, spots a numerical identifier on his cellmate’s left arm, he offers to cover it up in clandestine sessions. In 1957, Hans serves another sentence alongside his helpless, long-term boyfriend Oskar (Thomas Prenn), all the while raging against the powers that be, having known enough misery—and bliss—to accept his persecution willingly; accordingly, his short fuse frequently lands him in the grimy, stygian traps of the isolation unit. And in 1968, Hans attracts the attentions of Leo (Anton von Lucke), a fair-haired music teacher whose involvement with Hans precedes their internment. Witnessing all of this is Viktor, who evolves into a grizzled lifer with a weakness for the drugs he supplies to his fellow inmates—and with whom Hans forms the film’s trickiest and most significant relationship.

Great Freedom is distinguished less by the incidents it narrativizes than by the hypnotic pull of its craft. Lonely, mournful jazz horns intermittently punctuate the film’s soundtrack. The lighting favors ashen grays and sallow yellows. There is a quiet, reverent, and carefully calibrated restraint to these choices, one that never impedes on the viewer’s connection to the film’s central characters and grants their interpreters ample room to manifest lust, grief, and a seething fury at their callous containment. Meise relies on actorly expression and subtly convincing hair and makeup to describe time’s passage on his leads’ exteriors. (Hair designer Kerstin Gaecklein deserves special kudos for realizing the decades’ changing hairstyles with an incredible attention to detail.) Free from the distraction of rubbery, stymieing prosthetics or uncanny CGI, Viktor’s coarsening skin and Hans’s accruing wrinkles and flecks of grey take on a tacit poignancy, especially as these two figures keep returning to one another.

That neither von Lucke’s amiable twink nor Prenn’s despairing partner make as deep an impression as Hans’s elder cellmate seems to be precisely the point of Great Freedom. Viktor starts as our protagonist’s tormentor, becomes his advisor, then his protector, and finally a mix of brother and lover, no matter his protests that he is “not that way.” Hans’s fellowship with Viktor is the film’s heart, an unidealized love bond that is no less true for being born of contingent circumstances.

Meise could have not found two more compelling actors to delineate this bond. Great Freedom confirms Rogowski as a protean and exceptionally physical performer, a screen star who appears to emit his own force field. Rogowski’s background in dance, particularly in the authorial role of choreographer, is all over his finest performances, typically as outsiders and castaways. The actor molds Hans from moment to moment, taking a character that might read somewhat hazy on the page and imbuing him with both physical grace and cavernous interiority, his body conveying its own poetic feeling. Rogowski wields his sexiness in unexpected ways. He can lead with it, certainly, but also let it smolder right beneath the eyes, as quick and bright as a flame’s lick, so that his whole comportment seems to shiver with anticipation and invitation. In Rogowski’s wiry, warm-blooded frame, Hans has a radical certainty of self: he knows what his body desires, what his heart pines for, and is willing to take the risks to pursue it, no matter the consequences.

Friedrich is every bit Rogowski’s equal, alive to each moment in a performance of immense, self-abnegating prowess. He gives Viktor’s movements a hefty, hunched solidity that is granite-strong and weighted with a regret that he can seldom verbalize. These two actors connect with an immediate intensity that Rogowski has yet to achieve opposite the perpetual ingénue Paula Beer in the hetero dramas of Christian Petzold, which have familiarized him to arthouse audiences in the States. Rogowski and Friedrich elevate the multivalent candor of Great Freedom’s depiction of queer sexuality, which is by turns tender and rough, mundane and blissful; it is never less than a reviving force, a reminder to Meise’s characters that they are still alive, still yearning for the nearness of another needing body. Showing a penchant for close-ups and medium shots, French cinematographer Crystal Fournier, an early collaborator of Céline Sciamma, might have stepped back and lingered more heedfully on the magnetized bodies of these two actors, allowing us to bask in rather than glimpse their intimacy as it develops from cramped discomfort to impulsive carnality to an affection that comes as close to love as either has ever known.

Through its didactic focus on the historical consequences of Paragraph 175, Meise’s film functions as a testament to the countless men who were punished for actions that should have never been criminalized in the first place. (This is not simply progressivist hindsight: in 1867, the openly gay lawyer Karl Heinrich Ulrichs publicly pleaded with the Congress of German Jurists to rescind its earlier homophobic laws, four years before the ratification of Paragraph 175.) But by foregrounding Viktor, who has been convicted for a graver offense, and affording him the same nuanced compassion as its more forthrightly gay characters, Great Freedom ultimately makes a broader case about the mercilessness of prisons, which neither affirm nor rehabilitate lives but more often lay waste to them.

The coda of Great Freedom, in which Hans is released into a more permissive society after Proposition 175 is partly abolished in 1969, is sure to embitter certain viewers seeking a sunnier future for this long-suffering man. Instead, Meise gives us a bleak, bold ending that indicates Hans’s devotion to Viktor, but also the extent to which his protagonist has been conditioned to the inhumanity of incarceration. In Hans’s final, self-sabotaging action, there is a grim recognition of the carceral state’s power to quell the imagination and foreclose the ability to envision a future of untrammeled freedom for oneself—even when this future is a tangible actuality, something that can be seen but not quite believed. Perhaps the ultimate tragedy of Great Freedom is that Hans, caged for much of his existence, might elect to return to a place of steel-and-concrete captivity, a world that is realer than the so-called real world from which his citizenship was long ago revoked and where he can no longer feel at home.