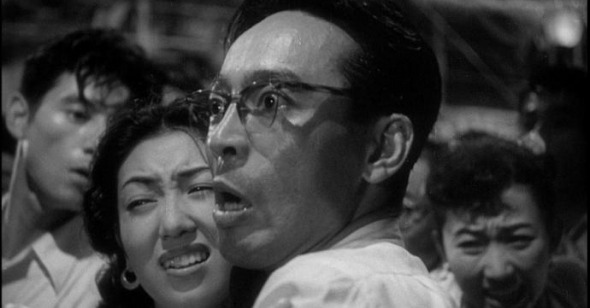 Though lacking the fantastic flourish of, say, a King Ghidorah or a Megalon, there‚Äôs something perfect, almost classical, in the form of Godzilla. His image is at once antediluvian and ultra-modern: a powerlifting prehistoric carnivore with skin like nuked-out blacktop, a coral reef for a spine, a stomp as regular and as percussive as a machine press, and an indelible roar that‚Äôs somewhere between the sound of screeching train brakes and a wounded bull elephant. Seen emerging from the bleary black-and-white night in his 1954 premiere, before infinite sequels and gravity defying, WWF battle-royale drop kicks reduced him to a Beastie Boys pop punch-line, he‚Äôs even genuinely impressive. His awkward, pear-shaped bulk, far from a liability, is key to his commanding presence. Herein lies the dismal failure of Hollywood‚Äôs recent ‚Äúre-imagined‚ÄĚ miscarriage; its slimmed-down, toned-up mega-monster, fleetly sprinting the avenues of nyc like a Jurassic jogger, seems too fragile in contrast to the unmoored, shambling volcano we‚Äôre accustomed to.

Roland Emmerich‚Äôs 1998 atrocity wasn‚Äôt the first time that America had disastrously tampered with Gojira; two years after his spectacular domestic debut, when Godzilla arrived stateside, his superstar break-through was botched and re-shuffled by its American distributor and unleashed shorn of 40 minutes of original footage. The most radical aspect of the 1956 American edit, which stood as the definitive version prior to Rialto pictures recent, long overdue re-release, was the insertion of Raymond Burr‚Äôs unfortunately named foreign correspondent, Steve Martin. This reassuringly familiar, stolid round-eye was part audience-substitute, part paternalistic tour guide, his nature as afterthought insertion assuring that he always remained oddly aloof from the action. Cut away to in disconnected shots (lensed in Hollywood, surrounded by Japanese-American actors with accents that made Tokyo seem like a suburb of Oklahoma City), Burr clenches his pipe in condescending, Gaijin Father Knows Best‚Äďstyle, and dispenses pearls of wisdom like: ‚ÄúIf he saw a monster, he‚Äôs had too much saki‚ÄĚ to the backs of heads standing in for the absentee original cast. All of the film‚Äôs drama and destruction, once passed through the monotonous conduit of Burr‚Äôs play-by-play, was utterly deflated; that the movie still managed to stomp itself into the collective conscious should be a significant testimony to the primal appeal of its scale-model apocalyptic imagery.

Rialto‚Äôs release of director Ishiro Honda‚Äôs original cut reveals a film that‚Äôs fully deserving of its reputation, cured of the American version‚Äôs gross miscalculations of pacing. The U.S. Godzilla dropped us into the action in medias res; Burr, with a smeary faceful of chocolate syrup blood, fumbles into consciousness in a ruined Tokyo, granting us a teasing peep of devastation to come before kicking into flashback mode, a reassurance of the incoming doomsday money-shot that will reward our patience. The original film, however, begins with a more discreet omen of impending doom; Akira Ikafube‚Äôs urgent theme, making the steady scrolling credits seem frantic, is interrupted in its mounting tempo by Richter scale-worthy footfalls and the noise of Godzilla‚Äôs primeval shrieks. From this established sense of cataclysm, Honda‚Äôs film, book-ended by images of black Pacific water full of latent peril, rotates whirlpool-style in tighter and tighter concentric circles around an inexorable catastrophe.

As Godzilla holds a secure place on that short list of works whose appeal has endured from my film-going infancy into the present, I wasn‚Äôt surprised to learn that Kaiju eiga (‚Äúmonster movies‚ÄĚ) have been edited into greatest stomp reels to screen at Japanese kids‚Äô film festivals. It‚Äôs natural that these movies would connect with kids; the genre‚Äôs enduring appeal is rooted in the way that these movies literalize Orson Welles‚Äô much-cited idea of a director‚Äôs set as ‚Äúthe best toy train set a boy could ask for,‚ÄĚ then let Godzilla (or Gamera, or Rodan, or Gappa, or‚Ä¶) do precisely what any healthy, red-blooded youngster wants to do at the sight of all that tidy, landscaped model fragility: level it. It was to the franchise‚Äôs mortal detriment that later Godzilla flicks deliberately courted the kiddie crowd, spinning him off into the bargain basement anime of ‚ÄúThe Godzilla Show,‚ÄĚ co-starring his semi-retarded offspring Godzooky, or writing the big guy into a series of weird protective relationships with precocious, moon-faced schoolboys. As any social misfit who spent most of their pre-adolescence in a dark arcade playing Rampage can tell you, these movies‚Äô appetite for chaos made them perfect as kids‚Äô stuff. Patrick Macias probably comes closest to defining their infantile appeal in Tokyoscope, his fine survey of Japanese cult films: ‚Äúspewing atomic heat death is the ultimate temper tantrum.‚ÄĚ

The optically printed bulldozing in Godzilla is prime smash-up fun, thanks largely to Eiji Tsubaraya‚Äôs painstakingly rendered mini-cityscapes, which crumble and vaporize enthusiastically as Godzilla wades through them. But what sets this Godzilla above the deluge of subsequent imitators is the way it explores an ambivalent balance between awestruck sequences of rubber-suited rampaging and a real understanding of epic suffering that seems very much of its time and place. After the Twin Towers came down in full Bruckheimer, blockbuster pomp, it‚Äôs impossible for any conscientious viewer not to feel reticent about corroborating with Hollywood‚Äôs penchant for flamboyantly destroying the world. The reptilian brain thrill of seeing mankind‚Äôs collective works atomized is undeniable, but that should compete with a terrifying knowledge‚ÄĒsometimes too-easily forgotten‚ÄĒof what a frail, precious, and perishable thing civilization actually is. So when Michael Bay smears Paris off the map as a mere adrenaline revving aside in Armageddon, I can only wonder what sick fuck wants to imagine, much less expensively visualize, such a possibility.

Honda‚Äôs Godzilla seems too close to genuine crisis to give itself over to any carnage without circumspection; the traces of recent national tragedy are omnipresent, discreet enough to eschew self-important sci-fi soapboxing and eco-hysteria that hobbles many of its sequels, but impossible to ignore. After Godzilla has thudded a holocaust through the megalopolis, scientists hold up a crackling geiger counter to a young boy oblivious to the fact that he‚Äôs been poisoned by the monster‚Äôs radioactive aura. It‚Äôs a heartbreakingly familiar image that plays like newsreel coming from Hiroshima. And in one key moment‚ÄĒexcised from the American cut‚ÄĒwe see two Tokyo commuters, discussing the impending catastrophe, who place the Godzilla in the context of contaminated tuna and black rain. A young woman isn‚Äôt risking anything, she says, ‚ÄúNot after I survived the bomb at Nagasaki; I treasure my life.‚ÄĚ It‚Äôs a digression that places cataclysm into the scale of the quotidian, and if there‚Äôs a greater accomplishment in the art of rubber monsters, I can‚Äôt imagine what it might be.