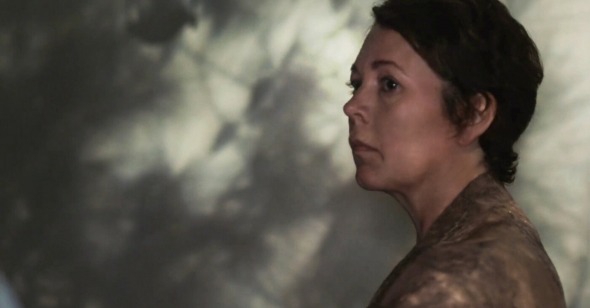 From a Distance
By Caitlin Quinlan

When I think of childhood holidays, I remember how my mother’s skin felt underwater: worn by the sun, smooth yet still tacky with sunscreen and chlorine. I would wrap my hands around her shoulders insistently, begging to be carried around the swimming pool on her back like the fabled scorpion and the frog. I am sure that, no matter what my mother might say now, I was a nuisance. I considered all the other ways I must have made life annoying, if not difficult, for my parents while watching Maggie Gyllenhaal’s directorial debut, The Lost Daughter, a film about the emotional drain of youth on children and their guardians alike. The arachnid who promises not to hurt the frog, who kindly agrees to ferry them both across a river, stings him anyway.

The film, an adaptation of Elena Ferrante’s novel of the same name, is well-attuned to the wounds of both parenthood and childhood. “They fuck you up, your mum and dad,” goes the Larkin poem, but what about how having children fucks you up right back? Ferrante’s protagonist Leda, played in Gyllenhaal’s film by Olivia Colman, has spent many years navigating her relationship with her two daughters, Martha and Bianca. “Bianca, right after her beautiful birth, had suddenly changed and treacherously taken for herself all my energy, all my strength, all my capacity for imagination,” Ferrante writes. As a self-proclaimed “unnatural mother,” Leda has long battled with her clashing desires for total independence and familial connection, unable to find a path between a sense of self and her identity as a parent.

While Leda is on a solo beach vacation, her complicated history unfurls slowly like orange peel cut in one curling motion. Every day by the shore she sees a holidaying family sprawled across the sand; cousins, aunts, mothers, husbands constantly coming and going. They are a dominant force in this coastal town enjoying the last days of summer, a tension on the strangers around them who would rather relax without their boisterous presence. Leda eyes them curiously, particularly the young mother Nina (Dakota Johnson) who struggles with her whiny and sickly toddler Elena. Is it a sense of kinship she feels, seeing her past self in Nina’s tired, overwhelmed frame, or is it something more? Ferrante’s story certainly explores Leda’s romantic feelings and sexual obsessions towards Nina more explicitly; Gyllenhaal is more muted on these suggestions of queerness, leaving them burrowed in the film’s undertones and bringing Leda’s preoccupations with motherhood and womanhood to the fore.

There is a mutual acknowledgment between the family and Leda, crossing paths so frequently on the beach and in the town, but that tension is equally present. When the family celebrates the birthday of Nina’s sister-in-law, Callie (Dagmara Dominczyk), they go around asking sunbathers to move so that they can enjoy the space. Leda steadfastly refuses. Callie is embittered but likely impressed, too. Colman’s curt, British sensibilities are well-used here, her clipped response establishing her dominance. It is as much an attempt to defend herself as it is to argue against someone she sees as a bully to Nina; Callie, pregnant for the first time, does not yet understand the toils of motherhood, living in the privilege of the close yet distanced, loving yet not fully responsible aunt role. Endlessly frustrated with Nina’s struggling, aloof approach to parenting, Callie is an extra burden for her to bear.

So when Elena goes missing one afternoon, Leda is an immediate help. Gyllenhaal begins to mirror the action with flashbacks from Leda’s past, her younger self (played with a natural tenacity by Jessie Buckley) frantically searching a tempestuous shoreline for Bianca. It is Leda who finds Elena, returning her to the safety of her mother’s arms. A bond is formed between Leda and Nina: where Leda feels kinship, Nina feels a sense of aspiration. This complication of feelings and projections onto one another grows heady and uncertain and Gyllenhaal keeps Leda at arm’s length. Even while Hélène Louvart’s camera beautifully mines her face for details, lingering on eyes and expressions, Leda retains an enigmatic quality.

A missing child leads to a missing doll, and where Leda was once the savior, she is now the culprit. The doll sits in her apartment, murky brown water lingering inside its plastic stomach, while Elena screams and cries and makes life more difficult for Nina. Where The Lost Daughter feels most accomplished is its handling of so many ambiguities and uncertainties, its tiptoeing across a minefield of possible outcomes and motives. Taking the doll is Leda’s most juvenile, childish action of the film, aggravating to the point of frustration—why doesn’t she just give it back? But itis Leda’s way of enacting her own kind of punishment on what the toy symbolizes (the expectation of motherhood for girls from their earliest days), on Elena for demanding of Nina what Bianca and Martha demanded of her, and on Nina for exposing her memories of her younger self.

Just as Leda is often an infuriating character, Gyllenhaal’s film is fraught with its own annoyances. The two-hour runtime is languid and meandering, reminiscent of days spent by the beach, yes, but it grows wearying all the same. All the glances and lingering stares, Leda’s dizzy spells, and the repetitive tensions and indecision related to the doll theft build to a sense of stuffiness, a suffocating cloud engulfing the film. It’s effective, perhaps, as a technique to impose a sense of motherhood’s challenges and turmoil, but it lacks the sharpness of Ferrante’s writing.

Still, it is the filmmaker’s deft grasp of the dynamics between women, not just mothers and daughters, that makes the film compelling. For Leda, Nina, and Callie, jealousy, childishness, independence, and protectiveness are all tightly wound coils ready to spring. Leda is losing her grip on these impulses and needs, and Colman enacts a measured and careful unraveling of the poise and stern demeanor the character presents at the beginning of the film. Men are simply a nuisance here; whether Leda’s ex-husband (Jack Farthing), who understood his own need for independence but not hers in their shared parenthood, or the boys in the local cinema one evening who rile Leda up to a point of self-combustion, they cause frustration and, ultimately, loneliness. It’s unclear who the father of Callie’s unborn child is, and Nina’s husband is often away, handling some vaguely criminal activities. Leda’s affair with a professor (Peter Sarsgaard) decades before and Nina’s holiday fling with bartender Will (Paul Mescal) unites them once again in dealing with spousal dissatisfaction.

Although it occurs much earlier in the book, Leda’s revelation that she abandoned her daughters when they were young in order to enjoy her youth and career is a well-placed turning point in the film. Leda has long rejected her role as the folkloric frog, and Nina is a young woman looking for a way to do the same. But this is a world of the needy and the giving, and someone must play the part of the scorpion. As Leda looks to Nina for sympathy, alliance, and forgiveness, hoping she will carry them both through their regrets and loneliness, it is Nina who lands the final sting.