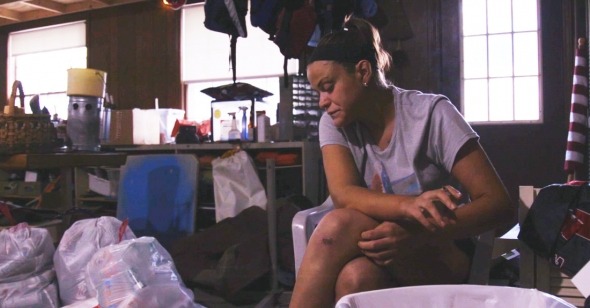 When I saw Angelo Madsen Minax’s North by Current at the 2021 IndieMemphis Film Festival, I mulled over ever writing about it because of how close to home it hit. A film by a trans masculine director that very much operates in the realm of film memoir was going to stir a personal reaction from me either way. Since seeing it, I have been unable to shake it and have struggled to articulate the density and layers of why it is so stirring, upsetting, and moving. North by Current is about intergenerational tragedy, trauma, addiction, grief, and familial strife, but it's also about how one navigates one’s transness among people who raised you and how your identity, while accepted on some level, is still an inescapably thorny subject. The film is brave, generous, and vulnerable about how often and how long queer people have to negotiate with concepts of childhood and home, and how they carry the loaded, weighted sense of dread, painful memories, and regret among their families. Nonetheless, North by Current remains a hopeful film about reconciliation.

The film begins with a montage of old family home movies that span from the mid-1980s to the end of the millennium, with Minax narrating, “In this world, most people think who you are is a compilation of things that have happened to you or a series of choices you made. Maybe the circumstances you were born into…. How did you become who you became?” The images show Minax before he transitioned. The off-kilter looking back at the person you were, one who was at odds with what they were presenting to the world, is captured in the purposely wonky audio feedback of Minax playing a piano at a school recital, looking unhappy. When his former name is uttered in these home movies, the audio is corrupted.

Minax grew up in the working-class sawmill town of Grayling, Michigan. In 2016, he returned to his Mormon family home for Christmas. Minax is interviewing his family as he tries to make a film about the tragedy around his niece Kalla’s untimely death as a toddler. But there is a loadedness to his return, as a trans person entering the space of Fox News–watching Mormons who seem live in the past. Minax sees these same home movies he has shown in his film play on his parents’ television, and he begins to realize that the family photos only show him pre-transition. His father tells Minax to take that question to his mother, who in her first interview initially speaks of him with female pronouns. This very sensitive and uneasy time back home already feels treacherous.

Minax is transparent about the fact that he is mining tricky territory. While this is a memoir, the film is also about the pain of others and that requires toeing the thin line of depiction versus exploitation: the kind that feels occasionally crossed in Jonathan Caouette’s Tarnation, and crossed with reckless abandon in the risibly manipulative Dear Zachary: A Letter to a Son About His Father by Kurt Kuenne. The tragedy surrounding Kalla’s loss became twofold when Minax’s sister Jesse and brother-in law David were suddenly treated as suspects in the death as the result of child abuse. After a second opinion on the autopsy, it was found that Kalla had an untreated brain bleed. As Minax interviews his parents, they note that in addition to losing a grandchild they were also grieving the loss of their daughter—not Jesse, then embroiled in this deeply upsetting and ultimately unfounded case handled by corrupt people, but Minax transitioning into a man. They speak of this daughter in the past tense as if they are not speaking to that same person, their son, in front of them. Minax is caught off-guard. He breaks down later when alone outside the house. Even in the presence of cameras, this is the sentiment they choose to share with him and how they viewed the life he sought for survival and self-actualization. When recalling this incident about being perceived as dead, Minax locates a truth amid deep pain, and says something that I have felt in my bones since beginning my transition, “I worked so hard to be alive.”

Many people in Minax’s shoes would have just walked away. The emotional wallop packed in the earliest parts of this film—which feature familial transphobia and microaggressions—cannot be overstated. This is the reality for many trans people: being referred to as “dead” rather than who you are being affirmed in any way. Yet there are nuances, as Minax is still welcome at home despite this thorny treatment, and he is not some deep secret even amongst his very conservative family. Clearly, they do see him in the present, although their trajectory in “accepting” him is not so much what Minax desires to show. Rather, he wants present people opening up and ruminating on their responses to some of the toughest moments in their lives. This includes himself.

A specter looms in North by Current. There is a second voiceover in the film, one that sounds out of time, untethered to the on-screen dynamics, younger and of no clear gender. Minax stated in an interview with BOMB Magazine that this alternative voiceover (“The Child”) is an amalgamation of his younger self, the spirit of his dead niece, and an imagined neighbor looking in from the outside. It is an omniscient, nonjudgmental God that, once constructed, helped Minax separate his subjectivity with the more abstract concepts he wanted to explore and on occasion interact with via the conversation between the dueling voiceovers.

In terms of the visual, Minax’s collages of home movies feature static interruptions and pixellations; these artistic flourishes recall Sadie Benning’s gender-questioning adolescence in such PXL-2000 “pixelvision” films as Flat Is Beautiful, a film that in many ways predicted the way trans youth would video journal and self-document their journeys with gender. Another film of trans images that came to mind for me in its use of home movie footage is Jeff Preiss’s STOP, whose warm, without-sound 16mm film stock catches the early gender questioning of his trans son from childhood into adulthood. STOP feels almost utopian in the unintrusive glances at a transgender child’s self-discovery, while North by Current is dealing with the ways one’s perception of themselves can be presented yet still not seen by those closest to them. Take the sequence of Minax showing when he was baptized Mormon at eight years old. “When I came out of the water that day, everything felt different,” he recalls in voiceover. “Because when you have a revelation, you acknowledge a need. A desire for something outside and beyond yourself. You start assessing the borders between belief and truth. What you know and what you trust.” Minax sees that baptism as the moment he began his gender questioning, while his parents saw it as another step for their child to follow their Mormon faith, unaware that his innate desires would soon supersede their wishes.

More tension is present in the ways Minax tries to find the right time to talk to Jesse, which takes years. Jesse’s loss of a young child, even after having three more children, remains intertwined with false accusations and judgment surrounding her lifestyle, one that already gained undue attention due to drug overdoses. Minax sees her as “the most impenetrable person I know,” but at the same time he regretfully admits he did not always try to know her as much as he should have. Minax reveals a similar timidity in wanting to not get involved in family skirmishes when his mom and sister have an argument in the car over why Jesse became an addict, admitting to checking out of the conversation for being “too intense.” Jesse admonishes him for refusing to pick a side, and when she finally opens up to him on camera she recalls all the ways in which his turmoil and crises reckoning with his transness impacted her, saying his bullying would cross the lines of sibling rivalry to impact her negatively. Her acknowledging the problems he must have had at that time feels maturely reflective, but she also wishes he would acknowledge the damage he did to her then rather than playing the role of flaw-free narrator in a film about their lives. Minax admits big feelings scare him, and so in a rare moment of humor he quips to the viewer, “Tell me: is stoicism only for men?”

Slowly the film begins to show that the previously strained, distant relationship among these siblings creates a bridge to better understanding. They recreate childhood moments for the film but also, in perhaps the biggest acknowledgment of healing, they go together to a local tattoo parlor where Jesse gets Kalla’s name inked on her body. Amid the differences in the directions life has taken them, and their incredibly different personalities, both share a kinship in how they each faced judgment and shunning from institutions and gatekeepers: Minax not being seen as a man nor a worthy being by the Mormon Church and Jesse being seen as an unfit mother due to her drug addiction. Their relationship ultimately forces Minax to drop his defenses and the distance he carved out of self-preservation to try to be more present in the lives of Jesse’s children. Jesse and Minax each start to vocalize and express the past pain that they had hid from each other for years. “I learned something,” Minax surmises, “When you speak the pain, it dissipates. When the pain is great you have to speak it over and over and over.” In the various discourses of recent films “about trauma,” so few of those films and the critical writing around them actively seek the next step to address the healing process.

North by Current is brutal in laying bare these vulnerabilities and honest in showing how imperfect people endure and act out in the face of conflict and change. What does one forgive? How long can you or the person opposed to you hold on to that feeling? Can your perspective ever shift or change? Can they change? Using the camera as a kind of veil while exploring these tough questions, Minax dives into a specific series of experiences and dynamics to illustrate that even our most fractured relationships are still salvageable.

North by Current is available to watch on PBS through the series POV.