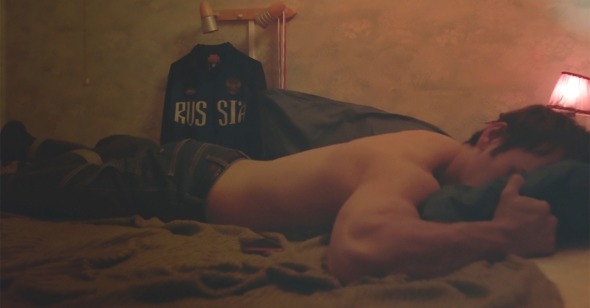 Back to Life
Caden Mark Gardner on Silent Voice

Silent Voice plays at Museum of the Moving Image on Sunday, July 25 as part of First Look 20/21.

From the Western perspective, in the last few decades Chechnya has gone from an anonymous republic of the Russian Federation to one largely defined by multiple wars and social conflict that has escalated into genocide, mass displacement, and defection from the region. All minority groups have been threatened under the Ramzan Kadyrov regime, but recent revelations that the LGBTQ community in Chechnya has been the subject of torture, disappearances, corporal punishment, imprisonment, and alleged purges authorized by the Chechen government and police force have stunned LGBTQ and human rights groups across the globe.

The increasingly bleak and disturbing situation has made its way into the West over recent years through news coverage, and the plight of the LGBTQ community was the subject of David France’s feature documentary Welcome to Chechnya, the title tipping its hand that the film’s audience comprises those on the outside. Movies and journalism detailing these issues often rely on access and testimonies by witnesses and those directly victimized. People reliving or articulating past traumas on screen is a fairly standard, expected trade-off in social issue documentaries. What’s most striking about Reka Valerik’s Silent Voice is that it presents its main subject, Khavaj, and his personal story without inflicting more pain or describing it in detail, even if the shocks to his mind and body are still painfully tangible. Though now in Belgium, he’s constantly being reminded of what was left in Chechnya, always having to look over his shoulder as he works to recover.

A Chechen in his twenties, Khavaj is a mixed martial arts fighter who was tortured by his fellow MMA fighter brothers when his sexuality was found out. Silent Voice’s title refers to Khavaj’s condition. The torture sent him into a state of shock, and though his vocal cords were not damaged in these attacks, Khavaj has a case of psychogenic aphonia, hindering his ability to talk. We learn from his monitor, who works for a human rights organization for Chechen refugees, that Khavaj’s asylum status in Belgium requires him to speak about his experience for his application. Thus, overcoming trauma is not just a personal and psychological battle, but a necessary tool for safe refuge.

Silent Voice is about the difficulties of evolving from a past that nearly killed you and having to enter a series of unknowns for survival. Khavaj has to recover his body and its faculties, while also being advised to mentally disassociate from the only way of life he has ever known. He sits in meetings with the refugee organization warning him and other gay Chechen men to swear off any contact between themselves and friends and family in Chechnya. The film easily could have taken the form of a procedural, but it instead becomes a sensorial film of great intimacy, with Khavaj’s body often shown in silhouette or partially obscured by darkness or camera placement. While Khavaj is stripped of his ability to speak, the deeply moving Silent Voice visualizes an evolution of how one navigates through trauma on the body and mind.

Khavaj never makes contact back home, but he receives a long series of exhausting and anxious voicemails from his mother. The messages help fill in some of his background for the audience, presenting a deeply complicated relationship. Khavaj’s mother urgently wants answers regarding his whereabouts and lords over him with feelings that he abandoned her. She pontificates about whether she failed him as a parent. She wants to know about the activities that got him found out. She tells him at one point that she never wants him to contact her in return. She scolds him for his homosexuality while also expressing love and concern. Comparing Khavaj’s mother and her voicemails to Natalia Akerman’s letters in News from Home may seem unfair, but the curiosity these demanding matriarchs share of their children being in faraway places, and the memory plays they have of their own pasts and relationships with others, spin comparable intergenerational tales of time and place, showing that disconnection can be informed by a variety of factors. Her volatility in these voicemails is deeply personal and cuts close to the bone, but she also is herself a survivor of war, and the removal of her son from her life is its own traumatic event. For her, even reaching out to him comes with its own risks.

Such moments register emotionally for the viewer without Khavaj’s perspective being vocally expressed to inform our own. He is obscured in every way: he lies in dark hotel rooms, his full face is not made visible for reasons anonymity and safety, and he is often slouched or curled in his spaces away from the outside world and the camera itself. The film does not use Khavaj for the audience to project onto like a blank canvas. His inscrutability is a necessity for him to fly under the radar, to be, in a tragic twist, in the closet once more. The threat of surveillance and being outed has forced Khavaj and others to constantly move around—many in Belgium’s Chechen diaspora are informants to the police back home. Khavaj lies in a state of suspension and purgatory, not able to enjoy mixed martial arts due to the Chechen émigré presence at a local gym. We see no frustrated outbursts, but a shot of a punched hole in his hotel room wall communicates how Khavaj feels about his situation.

Yet there are times in which Khavaj does not look at his situation as strictly tragic. He meditates, goes to therapy, and tries to broaden perspective on his silence, including a visit to a planetarium, where he is reminded that the universe’s creation is generated in darkness and silence. He still loves to work out and does MMA, with Valerik’s camera observing Khavaj’s body with intense, Claire Denis–like close-ups of his muscles in motion. There are shots of him with friends he has met on this journey in which he is shown as excitable, breaking out into fighting moves on the Belgian streets. The palpable sense of release in those moments is only matched by flashback footage of him as a carefree child determined to be a fighter. Ultimately, the voicemails from Khavaj’s mother soften and take on a reflective notion of accepting one’s past. Khavaj may never be able to return to Chechnya, and he may never want to. The boy became a young man who had to become phantom; what he will be next is an open question that also presents its own opportunity.