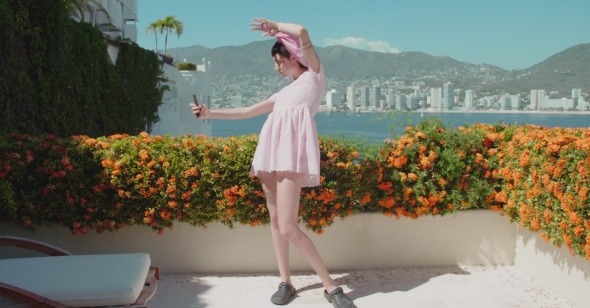 Here I Am
Caden Mark Gardner on Searching Eva

Searching Eva was originally scheduled to play at Museum of the Moving Image's First Look Festival in March.

Disclaimer: The subject of this film went by the name Eva Collé and identified as non-binary during filming and, of course, their former namesake is the title of the film. However, they now identify in male pronouns and by the male name of Adam, which was advised to me by Searching Eva director Pia Hellenthal and independently confirmed from Collé’s own social media. This piece will refer to Collé by last name for clarity and in male pronouns.

Living a life online, and therefore living in public, can create a cesspool of negativity, but there is also something irresistible that keeps us coming back for more. Whether on Tumblr or Instagram or LiveJournal or Twitter, the push and pull of the positive possibilities versus the toxicity of social media create an underlying tension for any individual who has come of age through it. The ways in which identities and signifiers with various communities and individuals have characterized a lot of Internet culture pervade Pia Hellenthal’s film Searching Eva. Through Hellenthal’s subject, Adam Collé, the film courses with the DNA of the rushes, mood shifts, and fluidity of life online, and shows how far film has come in presenting the Internet onscreen. There have been several films—from the Unfriended franchise to CAM—that have dramatized the experience of the Internet, but Searching Eva nails a specific rhythm, due in crucial part to the participation of its real-life subject.

The genesis of the film was when Collé’s Tumblr page, titled War Variations (owing its name to the Italian artist Amelia Rosselli’s book of poetry) caught the eye of Hellenthal and her producer Giorgia Malatrasi. They believed the personality behind this Tumblr page was capturing the zeitgeist of radical transparency online, crystallizing the previous decade’s explosion of social media. “In the very beginning, Adam said to us that he does not understand the concept of privacy,” Hellenthal told me via email. Collé’s initial perspective on being seen online and the level of scrutiny that came with that was, according to Hellenthal, “If somebody feels bad for behaving like an idiot and does not want it to be public, he should just not behave like an idiot.”

As the film lays bare, Collé is a model, writer, and sex worker, but Collé’s own curiosity shows the inadequacy of such simple categorization. Part of that stems from his own issues growing up amidst a deeply sexist culture in Italy—his father’s own toxic masculinity, closed-mindedness, and casual misogyny were formative in his upbringing. All this led Collé to seek refuge in social media as a teenager.

Much of Collé’s self-documentation on War Variations is adapted to the screen by Hellenthal in the form on-screen vignettes and visual mimicry of the prompts and posts he publishes and the messages he receives. In quick succession, “likes” are multiplying all over the screen while Collé in voiceover recites a previously published post—the Internet as a dopamine-like shot validating your thoughts and desires. The film also shows the other side of that, presenting intrusive questions from anonymous comments that Collé still freely interacts with. These range from queries about his gender identity to outright sexual propositions, and heartless, thoughtless critiques and comments do not easily roll off his back. Hellenthal employs an unconventional film grammar with the film’s fluid nonlinearity, from its unbroken shots to shape-shifting moments where the line between reality and fiction are deliberately blurred by both subject and filmmaker. Hellenthal says the Internet is presented on-screen not so much aesthetically but to re-create the programmatic ways people use it: “The topics all connected to identity in a larger sense—like work, the body, gender, etc. So the film functions more like how we surf the Internet. Fragments from different times, people and places show up in regards to the word you typed in your search engine or the social media bubble you are in.” Hellenthal also told me that the splintered structure of the film itself was inspired by Agnès Varda’s Vagabond, though thankfully unlike in that film there is no tragic ending for its protagonist. Ultimately, she didn’t want Searching Eva to be slotted into one type of film, in the same way its subject seeks not to be pigeonholed into one identity.

Collé is upfront about his sex work, but the “John” he engages with sexually on a hotel bed in one moment in the film, per Hellenthal, was an actor (whose face was largely obscured). This decision was made in order to represent Collé’s everyday while avoiding potential exploitation. In this way it becomes a performance piece that still also remains unpredictable and improvisational while relinquishing control of the film entirely to Collé’s corner. Searching Eva is not done in the vein of a Vice–style exposé on hipster exhibitionism and nihilism, as though Collé is some reckless, directionless youth. There is a warmth to the way Hellenthal captures Collé in his bedroom, bringing to mind the work of Chantal Akerman in the way simple, static camerawork can reveal so much by showing seemingly so little. Many of these moments present Collé at his most unguarded, showing his interpersonal dynamics with family, lovers, and friends, even though his smartphone is always within reach.

Power and performance are the driving forces of Searching Eva. One can easily be cynical in considering those who choose to live in such an online fashion, as though performance is necessarily superficial and hollow—that one seeks to be seen just to be seen, and that identity becomes a form of cultural currency. Such cynicism would describe some of Collé’s harsher commenters. The “searching” in Searching Eva’s title can take on different meaning, encouraging us to ask who is doing the searching. The term can be used to describe random followers of Collé on War Variations, or Hellenthal herself, both wishing to discover what it is that an individual such as Collé offers. There are also those who are just looking, perhaps trolling, to find something “wrong” as they search over Collé’s media, a slip-up or contradiction that might provide evidence of this millennial’s navel-gazing and perceived artificiality. At the same time, Collé is actively searching himself.

Collé, who identified as non-binary during filming and who presented as androgynous and gender-queer, has since identified as a trans man and goes by the more masculine name of Adam. His openness to the possibilities of his sexuality and gender identity is clear in the film, but his current life station was disclosed after this film ended. Finding this out after first viewing the film was not particularly shocking for this trans masculine viewer, as Collé’s masculinity felt more prominent beyond a simple bob or shaved head. His gender identity now feels significant, even more representative of LGBTQ people who came of age through online outsider communities that enabled and encouraged them to come to a better idea of who they are and who they like. Social media has revolutionized the ever-changing, ever-evolving ways queer people see themselves and the world around them and helps them feel less alone. Collé emergence as a social media personality shows the changing attitudes of individuals like him but also how communities, even minority ones, need to avoid the enforcement of rigid categorizations of identities, which Collé still faces. Platforms come and go, and Tumblr is already relatively antiquated; meanwhile, the personalities and people within those platforms evolve or outgrow them. Perhaps Searching Eva, titled with its star’s old name, can represent for Collé the culmination of his past, the shedding of an older skin.

For Adam Collé, living in public is a way of life. On-screen and off, Collé persists to not be defined by anyone but himself while still being open to self-discovery. His struggles to de-compartmentalize himself and not submit to online gawking create an undeniable tension, but over time Collé has found power in the inscrutablility of his image for a large subset of followers looking at his life through their screens. Searching Eva conveys the trials, travails, and affirmations in putting it all out there and questions our response to it as viewers. As Hellenthal shows, it is not so simple as to just follow, but also to absorb, respond, search, and connect.